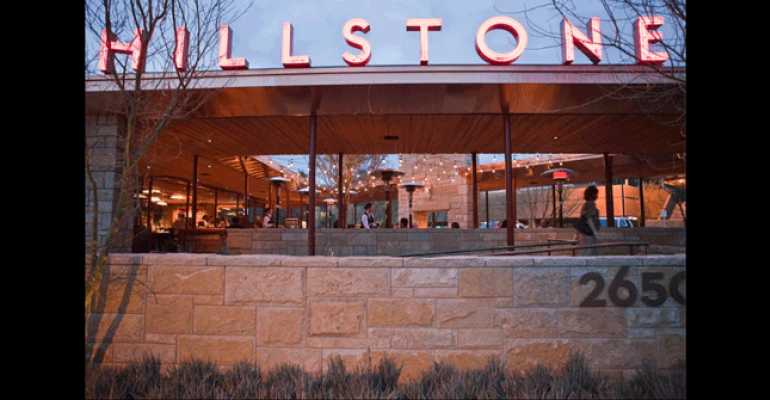 <p>What do consumers like about Hillstone? It provides a high-caliber adult experience that&rsquo;s short on trendiness and a sophisticated, yet not stuffy, experience.</p>
Trends>Consumer Trends

Demanding customers weigh in on full-service chain restaurants they like, call out those they don’t

Anyone can post a restaurant review on Yelp. But you have to be a subscriber to Consumer Reports to participate in that magazine’s annual ranking of chain restaurants. Which is why it was a very good day for a handful of chains when CR’s 2016 list was published.

Consumer Reports doesn’t pretend that its subscriber demographic is representative of the overall U.S. population. Its readers skew older (46.5 years of age versus 43.5 for the total U.S. adult population) and have a lot more money (a median household income of $70,444 versus $50,093)

And it seems fair to stereotype CR readers as active seekers of quality and value for every product, service or experience they buy. If customers like these are fans of your restaurant, you’re probably doing a lot of things right.

So which restaurants pass the CR test? The Consumer Reports National Research Center asked its readers to decide. The results of its survey reflect the opinions of 68,950 subscribers who reported on 170,838 meals consumed at 238 restaurant chains. It’s not a representative sample per se but the massive amounts of data collected give CR’s findings weight. Consider it a deep dive into minds of gen-X diners who have plenty of disposable income to spend on dining out.

Here is some of what CR’s survey found.

Standing alone as the top-scoring chain in any category: Hillstone. Haven’t heard of it? Headquartered in Beverly Hills, Calif., the Hillstone Restaurant Group is better known for its 17 Houston’s restaurants, which finished fifth in CR’s “Contemporary/Traditional American” rankings. Hillstone also runs 13 other concepts, many of them single-unit operations.

Hillstone’s food (average meal price: $40) was rated as just average by CR survey respondents. But they seem to really like dining there. So what’s the vibe like at a typical Hillstone? One New York City unit suggests this to its guests:

“We want you to be comfortable in our restaurants. Jackets or ties are not required, but we do request the following to help ensure everyone has an enjoyable experience. For men, please avoid sleeveless shirts, flip flops, and casual athletic attire. Hats may be worn in a conventional manner. For men and women, we request you avoid beach wear or active wear that is overly revealing.”

“We welcome families but will always be proactive to help in calming children who are overly excited.”

Also, “Our dining rooms do not have tables which allow groups larger than 6 people to sit at the same table.”

In short, Hillstone provides a high-caliber adult experience that’s short on trendiness and offers a sophisticated, yet not stuffy, experience. It’s right in the wheelhouse of CR subscribers, who ranked Seasons 52, Charleston’s and J. Alexander’s just a notch below Hillstone.

• First Watch in the “family” category.

• Fogo de Chao Brazilian Steakhouse got the “steakhouse” nod, narrowly edging out Capital Grille and Ruth’s Chris. Interestingly, the first 12 finishers in this category all earned high marks for food.

• Nobu took the Asian category by a large margin.

• Rudy’s Country Store and Bar-B-Q was the top-ranked barbecue restaurant.

• Abuelo’s was chosen best in “Mexican/Tex-Mex.”

Relative positioning aside, it was good news for any of the 117 chains that made the magazine’s printed list. Scores indicate their customers were “very satisfied on average” for all of them. But heads of some of the 121 other chain restaurants that were part of the study but did not make the top ranks might wince when they see how their organization fared.

That’s particularly so for the chains included on the “Top Complaints and Worst Offenders” list. On average, CR readers had a gripe about these factors of their dining experience:

Texas Roadhouse, with 38 complaints per 100 visits, ranked worst for excessive noise. Poor service was noted in 28 percent of dining occasions at Taco Mac. At 16 percent, Iron Skillet had the most issues with food prep. Huddle House drew the most complaints — 23 percent—about an unclean environment.

But even the higher-scoring chains overall got low marks on one key metric: value. Consumer Reports points out that in the three most expensive cuisine categories — steak, seafood and Asian — its survey respondents “were generally underwhelmed by the value they were getting. A mere 11 chains received favorable marks, and 75 earned subpar scores.

“In fact, in steak, seafood and Asian, all but two of the overall top-scoring restaurants delivered disappointing value — even when the food was rated top-notch. CR recommends diners head for LongHorn Steakhouse, Anthony’s Restaurants or HuHot Mongolian Grill to find value buys in these categories.”

The message here for independent operators: even well-heeled Consumer Reports readers want a better value proposition than they’re getting from chains. Restaurants that can give them one might be able to lure plenty of customers their way.

Editor’s note: Only Consumer Reports subscribers have online access to the full results of this survey. See the November 2016 print edition of Consumer Reports magazine to see the chain restaurant rankings referred to in this article.