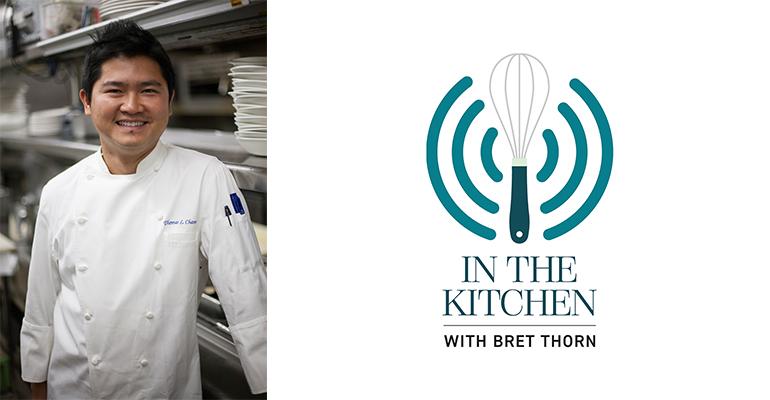 In this podcast Charoen discusses his journey, how khao man gai has evolved in the Bay Area (he has vegetarian and paleo versions).
People>Chefs

Tommy Charoen is the chef of Rooster & Rice, a 10-unit fast-casual concept that specializes in a chicken dish that is called khao man gai in Thai.

It’s a straightforward dish that actually originated with Chinese people from Hainan Island who immigrated to the Malay peninsula, where it’s known simply as Hainanese chicken rice. Chicken is poached in water seasoned with garlic, ginger and other aromatics, and then it’s served with rice that’s cooked in the same broth, a bowl of that broth, some chile sauce and usually a couple of cucumber chips. When the dish came to Thailand they introduced their own style of chile sauce and gave it a name that loosely translates as “rich rice chicken.”

Khao man gai might not have the high-pitch flavor complexity that many Thai dishes have, but it’s a comfort food there, and Charoen soon learned while cooking in restaurants in the San Francisco Bay area that it was comfort food for the cooks there, too, who often requested it for the family meal.

Charoen hadn’t meant to be a chef. He studied computers and business in college in Thailand, but when he visited a cousin in Las Vegas he saw the nice air-conditioned setups of the kitchens there, and he also liked the star power that chefs have in the United States. One thing led to another and he ended up cooking at Tsunami restaurant in the Venetian hotel, and then from there was taken to San Francisco to work for the Straits Restaurant Group where he met his now-business partner Bryan Lew. Together they opened an Indonesian restaurant in Palo Alto, Calif., called Indo, and it was in that kitchen that Rooster & Rice was born.

In this podcast Charoen discusses his journey, how khao man gai has evolved in the Bay Area (he has vegetarian and paleo versions).