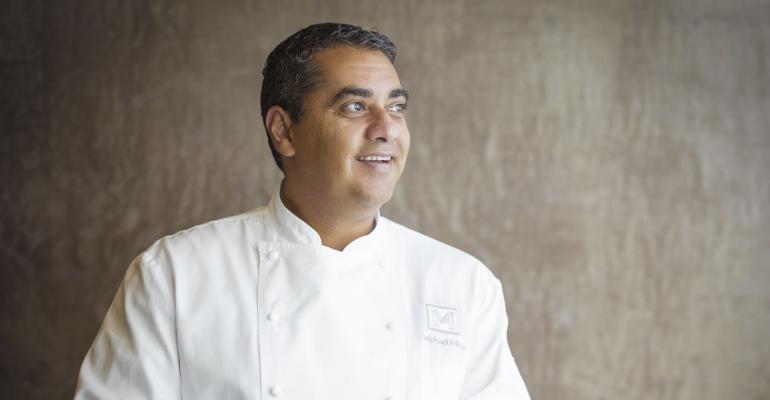 Eric Wolfinger
The new TableOne Hospitality, based in Las Vegas, is a spinoff of Michael Mina's multiconcept Mina Group, based in San Francisco.
People>Chefs

Out of the company of prolific celebrity chef Michael Mina comes the new TableOne Hospitality, a spinoff restaurant group designed to help cultivate and grow talent.

Based in Las Vegas, the new TableOne Hospitality is led by former Mina Group president and co-founder Patric Yumul. The goal, he said, is to build a portfolio of restaurants that will give talented team members that come up through Mina Group a way to spread their wings without leaving the fold.

“Michael and I have always had the desire to cultivate and grow talent. One of the best things we’ve been able to accomplish in our careers is when we see our team grow,” said Yumul in an interview with Nation’s Restaurant News. “What’s tough is when you’re trying to cultivate and grow talent —especially culinary talent and creators and makers — and ultimately they want to go off on their own to break out of Michael Mina’s shadow. So we wanted to create a company that would help them grow their businesses, utilizing all the skills and tricks of the trade, and be able to build a platform where they can stand out on their own.”

TableOne on Monday announced a partnership with hotel investment and management company Highgate, which includes independent hotel properties like Hotel Figueroa in Los Angeles, The Newbury in Boston, and The Knickerbocker in New York City. TableOne will develop restaurants and food-and-beverage programs for Highgate properties.

“I’ve always felt that the heart and soul of a hotel is its food-and-beverage program and its execution,” said Arash Azarbarzin, CEO of Highgate, in a statement. “Through our partnership with Michael and the talented Mina Group, we will introduce extraordinary culinary talent and enhanced concepts to our hotels — bringing additional value and activation to our operators.”

The partnership will give TableOne a pipeline of opportunity for new concepts and Highgate will serve as the group’s largest client, but Yumul said it’s not an exclusive relationship. TableOne will also develop restaurants with other partners.

Coming later this year in San Francisco, for example, is an as-yet-unnamed bar concept that will go into One Maritime Plaza in the city’s financial district. The bar will be developed by Carlo Splendorini, who headed up the Mina Group’s bar program but had left to create his own bars. With TableOne, he comes back to the fold but with his own concept, said Yumul.

Additionally, in Los Angeles, TableOne is preparing to open in late May/early June the new Mother Tongue at the Heimat wellness lifestyle club created by RSG Group. The chef for the concept has not yet been revealed, but Mother Tongue will offer “global fare with vibrant and clean ingredients that nourish the body and mind,” according to a press release, and will prioritize plant-based ingredients and whole foods.

And more new concepts will be announced later this year, Yumul said.

Now, as CEO and co-founder of TableOne, he hopes to create a place where chefs and other creatives come to find support in the way of infrastructure, systems, knowledge and opportunity.

Said Yumul: “We want to be the place where chefs and folks come and say, ‘We have a concept we’d like to grow. Can you help us?’”