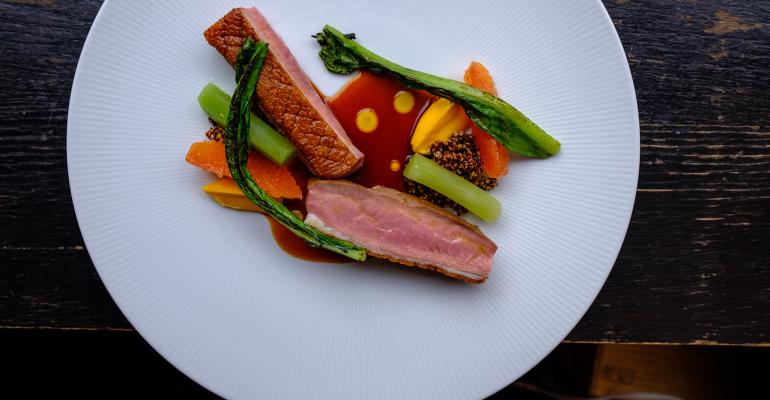 Influenced by Gordon Ramsay and Charlie Trotter, chef finds his own style at Bâtard

Bâtard restaurant opened in May of 2014, with owners Drew Nieporent, general manager John Winterman and chef-partner Markus Glocker intending it to be a pleasant fine-dining restaurant for the Manhattan neighborhood of Tribeca.

Then it won pretty much every award it could win, including a Michelin star and the James Beard Foundation Award for best new restaurant in the country, while topping all of New York City’s many lists of best new restaurants to visit that year.

Since then the 75-seat restaurant — open for dinner only except for Friday lunch — has retained its reputation as a destination for great food, wine and service. Glocker credits some of Bâtard’s success to timing, zigging by opening a mostly French restaurant when everyone else was zagging with Italian and Japanese concepts.

“Three years ago, who wanted to open a French restaurant?” he said.

Glocker was born into a restaurant family in Linz, Austria, where he was destined to take over his childless aunt’s hotel, “which I didn’t want to do: Be on a mountain by myself, next neighbor’s, like, half an hour away,” he said.

So he left for Germany and started working in fine-dining restaurants in Munich before finding himself in London, working at Gordon Ramsay’s second restaurant, the now-defunct Gordon Ramsay at Claridge’s.

Ramsay was riding high at the time, having just received three Michelin stars.

He even liked the 18-hour days.

“My first week with Gordon Ramsay was, like, I thought they forgot to send me home. I was there at 7 a.m. Then it was 10 p.m.,” he recalled. “It was almost nonsense in some aspects, but we had such a team, working with such spirit and discipline.”

From there, Glocker went to Chicago and worked at Charlie Trotter’s eponymous flagship.

“Charlie and Gordon couldn’t be more opposite,” Glocker said.

“With Gordon, it was more like, this is the deal: This is the dish. This is the recipe. Follow it and make sure it is the same [every time]. And that was hard enough,” Glocker said.

Trotter, on the other hand, expected creativity.

“He said, ‘Okay, give me something. Give me a vegetarian dish for the main course on the vegetable tasting menu,’ and the person had to produce,” Glocker said.

The result was rarely a dish that made it to the menu, but Trotter would take one or two elements from it and they would end up on a dish in the restaurant.

“It makes you feel good [as a cook],” Glocker said. “It makes you work harder and [makes you] more appreciative of the whole business as well. I think he was very good at that.”

At Bâtard, Glocker has sought to combine those approaches.

“I wanted to create a sort of energy the same way as when I was working for Gordon Ramsay. I wanted to have one team, not two teams, like a morning shift and a dinner shift … because it was very important to see the [same] person break down the fish, portion the fish, season the fish and cook the fish,” which allows for consistency, he said. “I think that was a very big thing in the success of Bâtard, that we did that, because it was so consistent in the beginning,” Glocker added. “As soon as we hit the third, fourth week, and knew what we were in for, it was very easy to control with the guys in the kitchen.”

Glocker is quick to avoid comparing himself to the late, great Trotter, saying Bâtard is a mere brasserie by comparison to the former Chicago dining landmark. But, like Trotter, he does sit down with his cooks to discuss dishes, even if most of his staff isn’t ready to create dishes.

“It’s very difficult to get experienced cooks at that level that you actually can tell them, ‘Do this, and put these two things together,’” he said.

Glocker’s cooking approach is to focus on great ingredients and to keep it simple.

In developing Bâtard’s menu, “I did not use every possible green on the plate,” he said. “I thought of what I would like to eat as well. A chef likes to cook a lot of things, but many chefs don’t even like to eat that type of food sometimes, because it’s more fun to cook it than to eat it.”

He also doesn’t believe in boring his customers about every detail about the food.

For example, he makes a rabbit bouillabaisse inspired by an early mentor, German chef Eckart Witzigmann, who would braise rabbit legs using the same flavor as the southern French seafood stew — saffron, fennel, sea salt, thyme, garlic, etc. — and serve it with sauce and a couple of potatoes.

Glocker’s version uses the whole rabbit, stuffing the leg meat into ravioli, serving the rack and grilled loin in a sauce of the braising liquid and garnishing it with shaved fennel.

“All of the flavors, but a little bit more elegant,” Glocker said. “It was just a yummy dish. You went in with the pasta, a lot of meat, sauce, garlic. It was very satisfying.

“But I did not send John Winterman out to the table to make sure that the guest gets explained every single part of this animal and how we did it, and by the time we’re finished the dish is cold. I did the opposite,” said Glocker. “We don’t have to explain the name of the dog from the winemaker. We have to explain the wine, how it tastes and how it fits [with the food], and walk off. The people are here to eat and drink and have a conversation at the table without knowing the chef.”