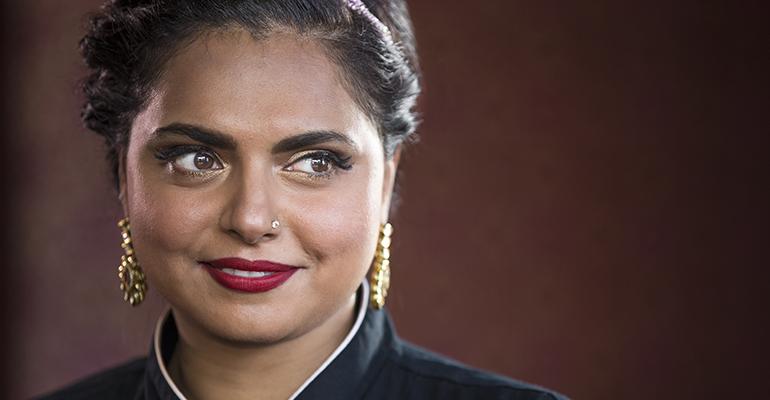 So contends Maneet Chauhan, who has made Tennessee’s capital her home, helping to transform the city — best known culinarily for its spicy fried chicken and meat-and-three plates — into a dining destination.

The chef and restaurateur came to the United States from India to attend The Culinary Institute of America. But seeing the poor quality of Indian food in the area, she saw a need to teach American diners about the cuisine of her homeland.

After working for a while on the East Coast, she became the opening chef of Vermilion, an Indian-Latin American restaurant in Chicago, and later also ran that restaurant’s sister location in New York.

She competed on TV, on “Iron Chef” and “The Next Iron Chef” — and she is currently a judge on “Chopped.” As her national reputation grew, she was soon courted with offers from Seattle, Los Angeles and New York, as well as Nashville. “My initial thought was, ‘Who the bleep goes to Nashville?’” she said. But she found the city was “just at the cusp of blowing up to be one of the big foodie cities.”

She opened Chauhan Ale & Masala House in November 2014 and helped introduce the city to Indian food, but translated in a way that she thought would be approachable to locals.

“The whole idea was just to celebrate Indian food,” she said. “I think so many people put so much thought into making food cerebral, and once you make it cerebral, a lot of people don’t get it.” “They’re a play on a lot of things that people are familiar with … and slowly we get them hooked on to Indian food,” she said.

Entrées include a ribeye steak marinated with ginger, garlic, yogurt and Chauhan’s own garam masala, served with “palak mashed potatoes” mixed with spinach. She offers seafood cioppino in coconut broth and beet croquettes with black-eyed peas and collard greens — Southern, but also Indian.

But items from the more traditional Indian side of the menu make up 50 percent of sales.

“It’s a great spectrum of people we see coming in,” Chauhan said of her customers, adding that many of them are quite well traveled and know good food. “You can’t hoodwink them.”

For the beverage program, Chauhan initially thought of wine, but realized that growing up in India, beer was a much more common drink. She connected with local brewer Derrick Morse and commissioned him to make beer using Indian spices. Soon she had saffron cardamom India pale ale, chai milk stout and tamarind sour beer.

Morse asked Chauhan and her business partners if they wanted to open a brewery. Then in March, she opened Tànsuŏ with Chinese-American chef Chris Cheung, who has also seen success with East Wind Snack Shop in his native Brooklyn, N.Y., and who Chauhan met working on a campaign for Sabra hummus.

Having settled into Nashville, Chauhan said she started to think about what the city was missing.

“It needed an upscale Chinese restaurant,” she said. “And I thought, ‘Hey, I have a friend who’s an amazing Chinese chef,’ and that’s how this came about.”

At Tànsuŏ, Cheung serves traditional Chinese dishes from the area around Shanghai, where his wife’s family is from, and from Toisan, the Cantonese city his ancestors are from. He also offers plays on Chinese-American food, such as Chinatown Chow Mein, made with fresh bamboo shoots, water chestnuts and baby corn instead of the canned variety traditionally used. He also serves General Tso’s Chicken made with premium chicken.

With Tànsuŏ up and running, Chauhan opened The Mockingbird in August with chef Brian Riggenbach and general manager Mikey Corona.

Also on the menu is a meatloaf made with pancetta, sirloin and chorizo served with a fried egg, Texas toast and adobo gravy, and a coq au vin potpie.

Other projects are in the works, including a second brewery she’s building on 84 acres of land she acquired in Murfreesboro, Tenn., to be called Hops Springs.

“We’re going to be doing music shows, food shows. It will be an amazing space,” she said.

“We definitely are not stopping,” she said. “You know, once you find something that works, you really start enjoying doing it. We’re enjoying getting all of these different flavors, these cuisines, the setup, the décor to Nashville, and people are loving it. We are absolutely thriving in this environment.”