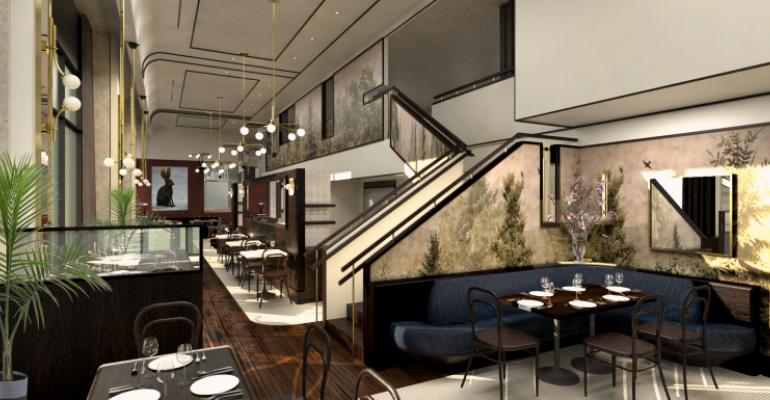 Thompson Hotel
The 120-seat Chez Maggy will be the primary dining space in the new Thompson Denver, scheduled to open in December.
People>Chefs

Chez Maggy will feature classics with a Colorado twist, like bison Bourguignonne

Los Angeles chef and restaurateur Ludovic Lefebvre is planning to leave the Golden State for the first time to open a new concept in Denver.

Lefebvre is planning the new brasserie Chez Maggy, which will be in the Thompson Denver, a new 200-room hotel under construction that is scheduled to open in December.

Lefebvre’s wife Krissy Lefebvre is originally from Denver and the couple has family there. The restaurant is named for Krissy’s late stepmother.

“I have always wanted to do a restaurant in Denver,” said Ludo Lefebvre, who is known for his two locations of Petit Trois in Los Angeles. “We’ve been working with Thompson for a few months now and everything is great.”

Like Petit Trois, Chez Maggy will be classically French with dishes that he described as “nothing very fancy,” with onion soup, steak tartare, steak frites, cassoulet and beef Bourguignonne — though the latter will feature bison raised in Colorado, he said.

The chef will also handle other food-and-beverage needs for the hotel and Chez Maggy will offer pastries and coffee in the morning from the bar, as well as room service.

Another Los Angeles concept — the Michelin-starred Trois Mec — which was a partnership between Ludo Lefebvre and Jon Shook and Vinny Dotolo, closed permanently last year during the pandemic shutdown. But because the lease has continued, the chef has been operating a takeout-and-delivery focused Persian kabab concept called Ludobab out of the space, which he said he plans to continue.