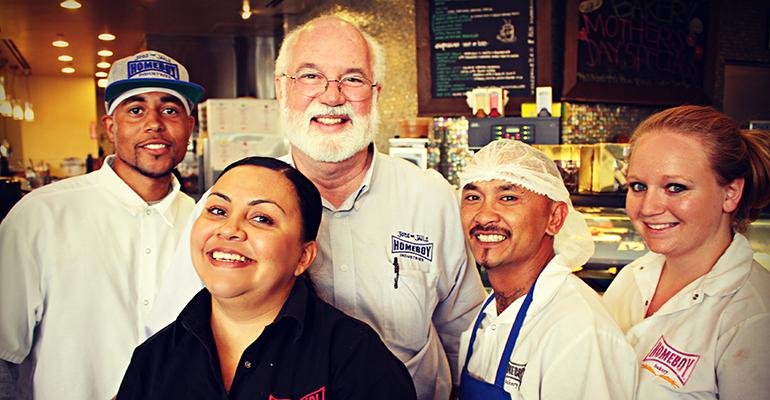 The spotlight was on the best and brightest in foodservice at the James Beard Foundation Awards on Monday. Among them was a Los Angeles Jesuit priest who sees food as a pathway to healing for those involved in gangs.

The 2016 James Beard Humanitarian of the Year award was given to Father Greg Boyle, founder of Homeboy Industries in Los Angeles, a 26-year-old organization that now runs a multifaceted business that includes cafes and a catering operation, grocery products sold in area stores and online, as well as baked goods sold at farmers markets across the city.

It began in 1988, when gang violence in parts of L.A. began to escalate to unprecedented levels.

Boyle, who was pastor of a church in the city’s then gang-ridden Boyle Heights neighborhood, said he first created an organization called Jobs for a Future. It was designed to help young people in the area find work as an alternative to the gang lifestyle that took so many lives during what Boyle called “the decade of death” between 1988 and 1998.

In 1992, the year riots across the city left more than 50 dead, Boyle said he was approached by movie producer Ray Stark, who wanted to put his money to good use. Boyle convinced Stark to buy an abandoned bakery in the neighborhood, which became the first Homeboy Bakery.

Initially the goal was to provide foodservice training and basic work skills to those who wanted to leave the gang life and earn an honest living. An early motto was “Nothing stops a bullet like a job.”

“Mainly, it’s about healing,” Boyle explains. “For an employed gang member, there’s still the possibility that he or she will reoffend. An educated gang member, same thing. But a healed gang member will not go to prison. And that’s where we’ve shifted. It’s not just about hiring people.”

To offer such services, however, Homeboy Industries has grown into an $18 million operation that is increasingly self-sufficient, serving as many as 1,000 people in a month who work through the 18-month-long program.

The organization took a hit after the recent recession as foundations cut back on donations. Hundreds were laid off and Boyle feared for Homeboy’s survival. Since then, however, the business side has fully recovered and is expanding.

In addition to a Homeboy Diner in L.A.’s City Hall along with a Homegirl Café and Catering branch in Chinatown, the program operates a Homeboy restaurant outlet in Los Angeles International Airport.

The food retail side includes a line of Homeboy tortilla strips and salsas. The group is starting to work with mini urban farms to grow organic produce for the restaurants. Another division is moving into solar panel installment, and yet another does silk-screen printing and embroidery.

“About 50 percent of our needs comes from our businesses, which is kind of remarkable,” says Boyle, who, while leading Homeboy Industries, has also been battling leukemia over the past decade. Now he’s feeling fine, he says, and has been given a clean bill of health.

Meanwhile, there’s more work to do.

Gang violence in L.A. has decreased significantly since the early 1990s, and Boyle believes the rehabilitation program has played a role in that. But gangs still exist and people still need help finding a way out.

“Prior to Homeboy, there was never really an exit ramp off this crazy violent freeway of gang life,” he says. “Now there is.”