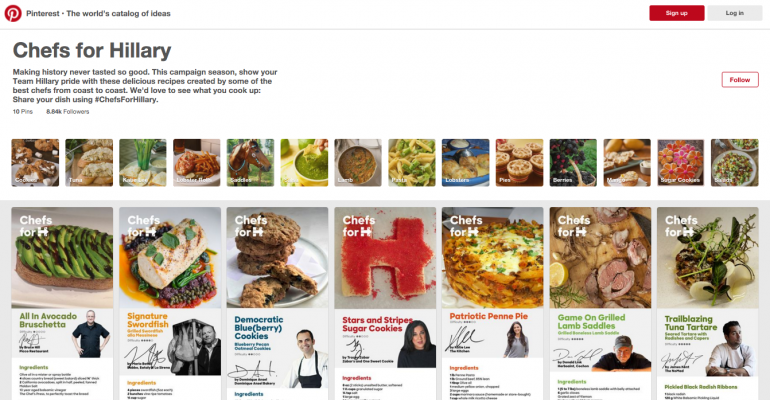 The campaign launched a Pinterest board on Wednesday at #ChefsforHillary with recipes for grilled swordfish from Mario Batali (Babbo, Eataly, La Sirena), blueberry cookies from Dominique Ansel (Dominique Ansel Bakery) and avocado bruschetta from Bruce Hill (Picco Restaurant), among others.

A goal is for the recipes to be used at campaign events and house parties, or to feed phone bank volunteers. Some participating chefs are also hosting a tasting reception/fundraiser on Sept. 13 in Washington, D.C., including Victor Albisu (Del Campo, Taco Bamba), Ris Lacoste (Ris) and Art Smith (Art and Soul, Table Fifty Two).

Clinton, through a campaign aide, told Eater, “In all my travels throughout America and around the globe, some of my fondest memories have been formed over a meal — or a really good drink. And a great recipe lets you relive those experiences over and over. That’s why I’m thrilled to have the support of these incredibly talented chefs. The recipes they’ve created will bring our volunteers and supporters together at house parties and phone banks across the country, and I hope they’ll be inspired to make them for years to come.”

Correction: Aug. 19, 2016  An earlier version of this story included an outdated reference to Ris Lacoste’s restaurant. She is chef at the restaurant Ris.