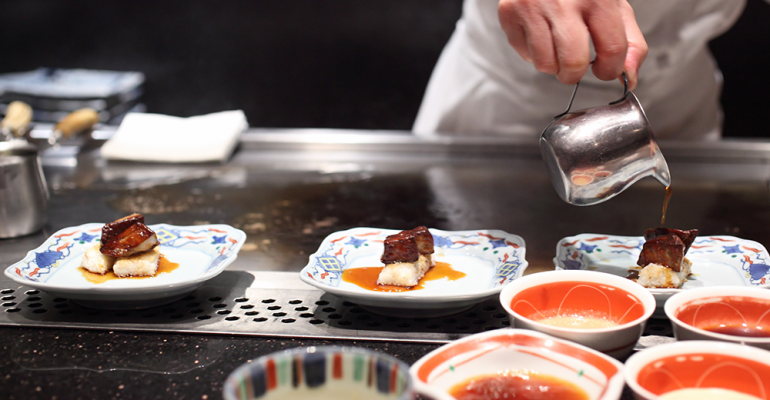 La Toque’s Ken Frank, an outspoken opponent of California’s ban on foie gras, has won a major victory in a six-year-old lawsuit that initially accused the Napa chef of subverting the law by “gifting” small portions of the French delicacy to diners as part of a tasting menu.

Judge Victoria Wood of the Superior Court of California in Napa County dismissed the case Aug. 23, ending a rollercoaster legal battle between Frank and the Animal Legal Defense Fund, or ADLF.

“I’m delighted to be out of danger and to have them off my back,” Frank said in a phone interview Thursday.

Frank has been a leading chef critic of the ban, which went into effect July 1, 2012. It prohibits the production or sale in California of any product, such as fattened duck liver, produced by force-feeding birds.

But in 2013, a handful of California fine dining chefs — including Frank — went rogue and started serving foie gras for free. Some chefs served it as a garnish, never listing it on the menu.

ALDF filed a lawsuit against Frank in March 2013 after the group found him serving foie gras as a complimentary “gift” in a tasting menu at the critically acclaimed restaurant.

At the time, Frank, and other chefs “gifting” foie gras, argued that they were not violating the law because they were not selling it to diners.

The law did not say “you couldn’t give it away,” Frank said.

“We tried a number of different ways (in 2013) to protest the law legally,” he added. “My goal all along was never to break the law but to protest it.”

The case against Frank, in the meantime, had been stayed while federal and state courts decided the fate of the California ban which has been challenged over the years.

In 2015, a Los Angeles federal district court overturned the foie gras ban and permanently blocked the state attorney general from enforcing the law.

“We put foie gras back on the menu that same day,” Frank said.

Two years later, the 9th Circuit Court of Appeals struck down that ruling. The ban wasn’t enforced as foie gras producers took the case to the U.S. Supreme Court. But in January 2019, the high court chose not to review the case, thus allowing the state to enforce the law, once again.

That set the stage for the ALDF to revisit its 2013 case against Frank, who had since lost the argument that “gifting” was not against the law.

When the original lawsuit was filed in 2013, Wood said there was no “legal precedent” yet clarifying the legality of serving foie gras as a gift “in conjunction with other bargained for menu items,” she wrote in her ruling.

Since that time, the state’s First District Court of Appeals has ruled that the term “sold” does include serving foie gras as part of a tasting menu, "regardless of whether there is a separate charge for the foie gras," Wood wrote in her Aug. 23 ruling.

Frank said Thursday that he hasn’t served foie gras since the January 2019 ruling.

Wood dismissed the case because the ALDF could not provide evidence that La Toque would knowingly violate the law in the future.

Stephen Wells, ALDF's executive director, said in a statement, "Ducks and geese suffer immensely to produce foie gras. That's why California prohibits the production and sale of this abusive product. Thanks to our lawsuit, La Toque vowed to cease illegal foie gras sales — and we will continue to hold accountable any other seller that flouts the law."

An ALDF attorney told Eater San Francisco that the ruling was a “complex” victory. “A line has been drawn in the sand by the Court of Appeal, and no other restaurant is likely to do what La Toque was doing.”

Frank said he plans to ask the court to order ALDF to reimburse La Toque for legal costs.

While he’s happy about the dismissal, Frank said he remains critical of the “poorly written” law. The legality of the ban, currently being challenged by foie gras producers, is back under review by a federal court and could be decided in the next few weeks, Frank said.

“Me winning the lawsuit with ALDF is one small battle in the bigger war,” he said.