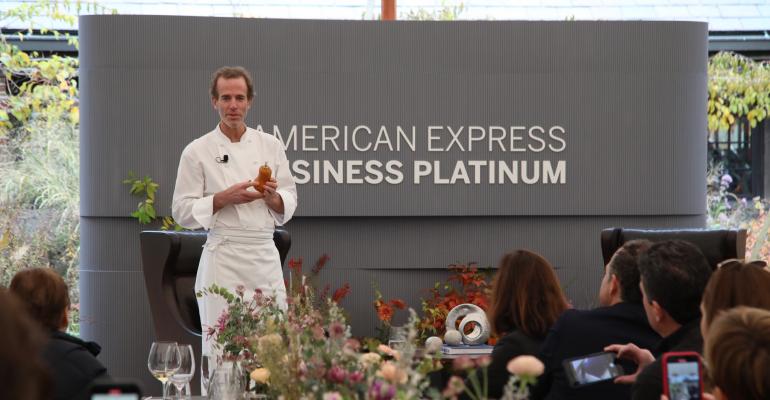 Chef Dan Barber talks about the new menu at Blue Hill at Stone Barn during an American Express event on Nov. 14.
People>Chefs

After being closed for almost two years due to the pandemic, Blue Hill at Stone Barns, the two-starred Michelin restaurant in New York’s Hudson Valley run by chef Dan Barber, is open and ready for business following an extended residency program.

The restaurant initially reopened a few months after the pandemic-induced shutdown as a visiting chefs program. The residency program hosted chefs, allowing them all the resources of Blue Hill at Stone Barns, and transforming the restaurant into different chef-operated concepts for nine months. Now, the restaurant is back to Blue Hill.

“[The chef residency] was inspiring, educational and influential for us for our reopening, which … isn’t a question mark at all. It’s very much like we are back to Blue Hill,” Barber told Restaurant Hospitality.

Blue Hill at Stone Barn reopened in late September with a full staff. Unlike other restaurants facing labor challenges, Barber said there were no issues finding workers.

“We’ve got a great young team [that’s] passionate about the issues that we believe in and are excited to create food and craft around some very important food issues that come into the foreground to light over this COVID period,” said Barber. “It's a great time at Blue Hill because we have a purpose now in a way that is really acute and everyone feels the kind of energy from that, but that's exciting.”

Part of that purpose is fixing the supply chain that so many others are struggling against.

Barber grows most of the vegetables and fruit used for Blue Hill at Stone Barns on the grounds and, for anything that they don’t grow, Barber and his team source locally. Because of that, they haven’t seen any supply chain challenges.

“I think we as consumers are going to have to start thinking more regionally and more locally for our supplies, whether it’s food or fashion or whatever it is. The international supply chain is showing its weakness, especially in times of like stress and disruption,” said Barber. “There’s a different value being placed on food that comes from a particular region that has a story attached to it… I think that the momentum for this kind of eating is getting stronger.”

At a Nov. 14 event hosted by American Express to celebrate the new Business Platinum Card, Barber spoke about his love of the grounds at Stone Barns and previewed the restaurant’s menu, including a brand-new squash that he designed as part of his company Row 7 Seed Company.

“I was speaking with [vegetable breeder Michael Mazourek] and challenged him to create a butternut squash that actually tasted good without sugar and butter,” said Barber at the event. “He said he had never been asked to breed for flavor before.”

That squash is the star of a new dish at Blue Hill at Stone Barns.

Guests can also expect more messaging from Blue Hill while they enjoy their meals.

To eat at the restaurant, guests must participate in an hour and a half tour of the grounds to understand how and where their food is harvested. This also includes a tour of the kitchen, and guests hear about the 60-plus farmers Blue Hill at Stone Barns works with.

“There’s going to be more messaging, more communication, more education,” said Barber. “Our plan is to have you work your way through the pleasure of dining at Blue Hill, but simultaneously be feeding not just your stomach but your mind.”

Ultimately, Barber wants Blue Hill at Stone Barns to serve as an educational experience for both the customers and the chefs. He wants Blue Hill to be a launch pad for other chefs to move onto bigger and better jobs for them.

“I’m hoping that the employees of our restaurant find a kind of platform that they can take with them. As they go out to the world most of our cooks, when they leave, either become sous chef or go into a food related activity,” said Barber. “That’s the best way to spread the message. I hope we can give them the tools to be successful as they move on from Blue Hill and put a stake in the ground wherever they do.”