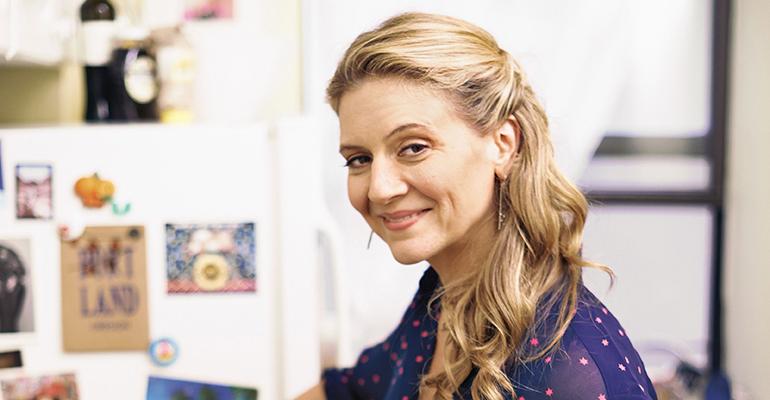 Amanda Freitag spent the better part of two decades cooking in New York City before becoming a TV personality as a judge on the Food Network series Chopped and as host with Ty Pennington of American Diner Revival.

After graduating from The Culinary Institute of America in Hyde Park, N.Y., she worked in such fine dining establishments as Vong, Verbena and Cesca before becoming executive chef first at Gusto and then at The Harrison.

She recently shared her advice for reviving diners and fostering creativity with Restaurant Hospitality.

It was great. Diners are near and dear to my heart. They’re like the pillar of the community; they’re like the town hall. They’re family-owned or operated a small group of people, whether they be extended family or it’s been passed down through generations, and they’re just operating every day and they don’t really get to put money away in the bank and save it for renovation, and if they do put money away it usually gets used on repair or immediate things, not updating the restaurant and keeping it current to compete with others.

It seems like anyone running a restaurant has trouble finding time to step back and get a big-picture look.

Right, if they’re lucky enough to be that busy. What happens is it becomes a smaller and smaller staff and everybody’s just doing the job of two or three people. It was interesting to see across the country different diners, different themes, different styles and similar issues in each one. They don’t have time to update — fix a seat, fix a booth, change a menu. Everyone’s just on autopilot, just hoping for that one day when they can take a minute to fix everything.

What solutions were you able to find?

Mostly just giving the dining room a small facelift would help tremendously. It helped the owners feel like there was hope, it helped the community want to come back there if they hadn’t been in awhile. Trying to just give it that fresher look and put a few items on the menu that are more current.

How do you determine what menu upgrades are necessary?

You just have to listen to your customers. Even if you have a theme, and your theme is Southwestern but somebody wants egg white in their burrito, you just give it to them. And if 10 people ask for that a week maybe you need to step back and say ‘you know what? Maybe we’ll create something that appeals to a lighter menu item.’”

So you could actually develop it in a kitchen so it tastes great rather than responding to special requests on the fly.

[Doing the show] was a wonderful experience. We made some beautiful friends along the way. It’s the American dream for a lot of people to own their own business and have something that was their own and work with their families and pour everything they had into their businesses. So to see them struggling and then see them come back again and feel good about what they’re doing is just the ultimate in helping people.

What advice do you have for diner owners and other independent restaurant operators?

Prioritize, first of all, what needs to be fixed in the restaurant, whether it be the menu or something in the dining room that’s an eyesore [like water damage on the ceiling]. If you’re hearing that people want different things on the menu and they’re going down the street to get it, change the menu. Make it happen. Or if you’re hearing people say “I’d love to sit in that booth, but the leather’s broken on it,” maybe take the time to fix that one thing.

I think it’s overwhelming sometimes to think you have to do a complete overhaul. So I think small victories, little projects, and just chipping away at that each day.

Just take baby steps, because if you look at the whole thing and want to change it all, it’s really not going to get done like that.

How can operators find the time to make those fixes?

That’s a big deal, the “when.” Obviously you’re not going to work on it during your busiest hours when you have the most customers in your restaurant. But you have to carve out the time for it.

A lot of these small restaurants are family owned, and they’re already juggling kids and school and business and all of that. It’s hard to find that extra time, but it’s important.

I mean these small, local restaurants are the heart of America. I know that sounds really cheesy in a way, but without those great little towns that you visit on a trip, and you remember that experience that you had at that restaurant — those mom-and-pop places that make up what is the fabric of this country. It’s small businesses, people on their own being entrepreneurs. That’s what the goals are, and it’s hard to compete against big chain restaurants. Those are consistent places. People go in, they see familiar items, they get what they want to get, they get it fast and they get out. So it’s harder and harder these days to compete.

Do you have thoughts on what independent restaurants can do to set themselves apart from big chains?

I think they really need to embrace what they are — that wonderful feeling of going in somewhere and having that greeting as if they do know you. If it’s your first time or your tenth time, you always feel like you’re a regular there.

Sometimes you get lost in a sea of people at a big chain restaurant. You’re just a number. I think it’s really important to make each customer feel like they’re the regular. That’s the specialty of those smaller restaurants.

One challenge that all restaurants face is staffing. Is there a way to instill that local independent culture into your staff, even if they’re only going to be there for a couple of months?

I think it’s really important to treat your staff well, obviously — promote from within, always find that person who’s the go-getter and nurture them. Even among the family members — we met a lot of families, and you could see who the boss was out of the kids, and you could see who just wanted to work in the kitchen, the creative one, the business-head one. Everyone has their skills that can be nurtured and used.

I think if you set examples, if you buy from the local farmer, if you buy from the guy down the street who makes the tables or the chairs, you just set that precedent of supporting your local community. I think your employees will see that, and talk about it with their customers. It spreads the good will among the community.

What else are you working on these days?

I’m doing some consulting work right now, so I’m back in the kitchen, which feels really good.

It’s super cool to see and meet the owners of these places and how excited they are to show off and compete and be able to win [the grand prize is $50,000]. I mean $50,000 is a lot for a small restaurant.

You can replace a lot of upholstery with that.

Yes you can. And you can get out of debt and move ahead and pay off some longstanding bills, make a new menu, paint the walls. It’s a lot. It’s really a big deal.

The three finalists fly out to Minneapolis, and it always gets me when I meet them and they’re excited. We have dinner with them the night before. It’s like a vacation for them, and I see it in a lot of them where they’re almost uncomfortable. They’re calling the restaurant and they’re checking in and making sure everything’s okay. It’s a mere 48 hours that they’re gone, but it’s a big deal. And I also think just stepping away and getting some perspective, and getting the appreciation that they deserve, which a lot of those small business owners don’t get on a daily basis. It’s a really wonderful thing. I’m so glad I’m a part of it again this year.

Do you miss the day-to-day adrenaline rush of running a kitchen?

I do. I miss the team. I’ve never wanted to be a personal or private chef, by myself every day in the kitchen. My whole reason for going into the restaurant world is because I love the industry, the business, the team aspect of it. My favorite part of it was the whole team, together, doing it every day. It’s like producing a show. You practice, you prep, you put on a show, which is dinner service, you finish up and you toast to your success and you do it all again tomorrow.