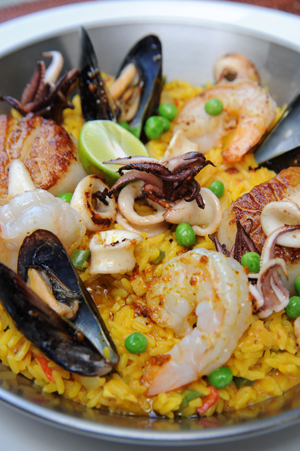 Like other popular traditions such as chili and barbecue sauce, paella recipes vary. The dish has its roots in Valencia, Spain, and gets its name from the traditional two-handled pan in which it is cooked.

Classic paella features rice and saffron, with a combination of meats, shellfish, garlic, onions and vegetables such as artichokes, tomatoes and peas. At Fig & Olive Melrose Place in West Hollywood, CA, and Fig & Olive in Newport Beach, CA, executive chef Pascal Lorange features Paella del Mar ($32), a recipe he developed while living on the Spanish Canary Islands, off the coast of West Africa.

In a large paella pan or sauté pan, add the rice and cook for 2 minutes, then slowly add the vegetable broth. Mix and season.

After 10 minutes, add liquid to cover the rice, along with all the protein placed on top. Cover with foil and finish cooking in oven. Slice lemon, garnish and serve.

Tap into the roots of Mediterranean comfort food
Dec 02, 2013