What dad eats and cooks

This is part of Restaurant Hospitality’s special coverage of the 2012 Food & Wine classic held in Aspen, Colo., June 15-17.

In honor of Father’s Day, we decided to ask some well-known chefs about their fathers: Could they cook? What was their favorite thing to eat? Were they happy with their son or daughter’s decision to become a chef?

My father was a brilliant cook. He inspired me. When I was 12 years old he got this blade steak he marinated for two days and he grilled it in the fireplace. He passed away two months ago at age 90. He had a great life. He was one of those fathers who wasn’t demonstrative with his affection, but he was very proud of me, even though he told me he cooked better than me (he laughs).

“No, my dad did not cook. Italian men of that generation

are basically consumers. He would come home and want a martini and read the paper. He had a menu he really liked and my mom had to have it on the table at a certain time. My dad was a huge pork and beef fan. I just buried him a few weeks ago and we put together a menu for his funeral before he died. There were things on there he hated, like green vegetables, which he thought were a waste of time. But we also put a 40-day dry aged ribeye, which he would have loved.

My dad didn’t cook often because he was a geologist who was often out in the woods foraging. But as a result, he would make mushroom toast with really good bread and fresh chanterelle mushrooms. I remember coming back from Switzerland and I made him a mackerel dish similar to the mackerel we grew up eating, and he said, “Wow, this is really good.” He also loved when I salted fresh mackerel that we caught fishing together. I would put it with a little mashed potato, lemon and dill. My dad didn’t understand cooking, but he was very supportive of my decision to become a cook.

Jamie Bissonnette, executive chef of Coppa and Toro in Boston

My father now cooks a lot, but when I was a kid he didn’t cook at all. He retired and fell in love with cooking. I teach him things and he shows off for his friends and brags. It’s pretty awesome. He likes to grill a lot. His favorite thing used to be Montreal Steak Seasoning, but I got him away from premixed things. He cooks steaks very well, and he’s getting very good with vegetables. At first he wasn’t supportive of me being a chef, so I put myself through school. But now he’s extremely supportive.

My dad made a couple things very well. He liked to make this egg and vegetable dish he calls pot au feu, which is really not that. And he also liked to make this sandwich of whole wheat bread, peanut butter, apples, sunflower seeds, sprouts and mayo; a  weird combination, but really good. He was pretty excited about me becoming a chef and he came with me when I competed on Top Chef Masters. My dad follows a strict diet, so he likes it when I cook vegetables. Even though I own a restaurant called Beast, I don’t mind cooking him vegetables because I love my dad.

Jimmy Bradley, chef/owner of Red Cat and The Harrison in New York City

My dad is a great cook. He’s a computer programmer and a mathematician, but he was the cook in the family. He taught me how to be a locavore. In the ‘70s, when we wanted peanutbutter we ground peanuts. There was no such thing as buying Wonder Bread at my dad’s house. If it wasn’t from a natural grain we didn’t eat it. He told me, 'How can anyone know what you want on Thursday when it’s Tuesday?' So he shopped for fresh ingredients every day. I had an amazing example that I never paid attention to until I got into the business. The things he taught me I use all the time now. 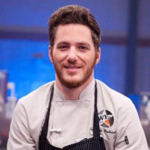 Spike Mendelsohn, chef/owner of Good Stuff Eatery and We, The Pizza in Washington, D.C.

The only thing my dad could ever make was toad in the hole. He would make it for me on my birthday. We called him the supertaster of the family. He had a great palate and he knew good food when he tasted it. My dad got sucked into the restaurant business because of my Greek mother. He had no choice because he fell in love with her. He adapted and became an amazing restaurateur and I grew up in the business. I don’t think this would have been the career he would have chosen for me, but it was natural for me to be in this business. My father loves chicken livers and sweetbreads, which I make on holidays for him.