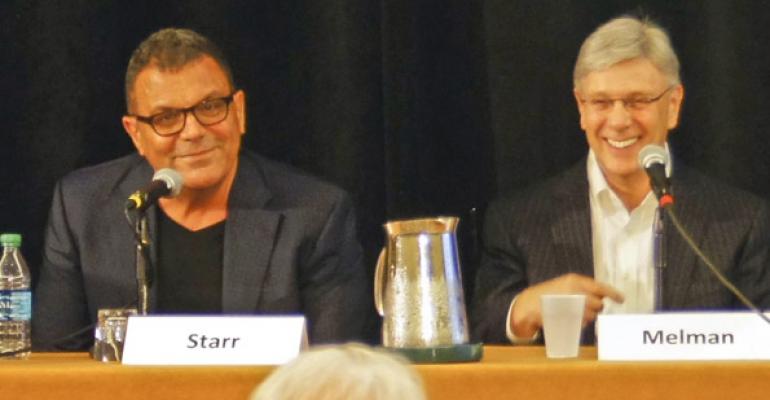 Stephen Starr, 2013 winner of the Richard Melman Innovator of the Year Award, held court with The Man on a recent panel. &bull; See more Top Chefs

At the recent MUFSO conference, Restaurant Hospitality honored Stephen Starr with the annual Richard Melman Innovator of the Year award, named for the founder and chairman of Lettuce Entertain You Enterprises. Over the last two decades, his Philadelphia-based multiconcept company, Starr Restaurants, has launched a number of stylish and popular restaurant concepts and is arguably the key reason for the city’s revitalized culinary scene. Starr has also branched out with two high-profile, high-volume spots in New York City, Buddakan and Morimoto, and other concepts in New Jersey, Florida and Washington, DC. Starr and Melman joined RH editor Mike Sanson in a spirited exchange of ideas during the conference.

Sanson: How do you move from giving birth to one restaurant then onto the next new project? What’s the process?

Starr: You just absorb things and extract things here and there. We flew in this morning and quickly went to four places (in Dallas), and it was inspirational. Two of those elements I want to extract and do somewhere. I believe when you are traveling and seeing things, you get inspired. Then there are occasions when you are truly brilliant and something great comes to you, but as you get older, that’s (less frequent).

Sanson: What projects do you both have in the works?

Starr: Something I’ve learned is that I can’t do everything myself, so I’ve been looking at other chefs and restaurateurs to “executive produce” with them. One of our latest restaurants is Serpico. I met the chef, Peter Serpico, by accident, and instead of trying to recreate what he did, I partnered with him.

I’ve been looking for talent. I used to be in the music business, and like the A&R guy, I’m looking for people to do business with. I can help with the infrastructure and experience.

Melman: We have four projects that will open before the end of February. We already have a couple of restaurants in Santa Monica, and we’ve fallen in love with it. So we decided to create a Santa Monica-type restaurant…called Summer House Santa Monica. Another Stella Barra will open two weeks later. We’ll have a new Joe’s Stone Crab in Washington, DC in January. And my kids will open RPM Steak soon.

Sanson: You recently opened Hybird, a fast-casual chicken restaurant, with Ahmir “Questlove” Thompson, the drummer on Jimmy Kimmel’s show. How did that deal come together?

Starr: He happens to be from Philadelphia, and he developed this drumstick thing on the side. It sounded pretty crazy, but I tasted it and it’s very good. I just thought it was cool, it didn’t cost a lot of money (to develop) and I thought it would be a good branding opportunity. Right now it’s in the Chelsea Market in New York, and we might be doing others. I think our company needs to stay fresh and do these innovative, slightly peculiar things sometimes. For our employees, many of them people in their 20s and 30s, it’s a cool thing for them to say, “My boss is hanging out with Questlove.”

Sanson: How do you look at expansion?

Melman: I think we are part artist and part businessman. I certainly like doing different things. A friend once told me, “Your biggest weakness is your biggest strength. You open something, it’s successful, and you never duplicate it.” I realized that it’s also one of my biggest strengths, because you learn so much from all these new things and it keeps things fresh. I’m not against growth. If I have partners who wanted to take something and grow it, I probably would not object. But we’ve never done more than 10 of anything.

Starr: We’ve been approached by companies that want to buy us, and they always say the same thing: You’re just not set up for this. I always use him (pointing to Melman) as the example of why I’m smart.

Sanson: What about experimental concepts?

Melman: We had one, Bub City, that had a music component, and it was a wonderful concept but we never made money with it.

Resurrecting Bub City was my kids’ idea. My middle son said young girls love country music—that might be the reason he wanted to do it. I thought it was crazy bringing back the name, not realizing all these kids had parties there. My kids said their friends would remember it.

Starr: I’ve been wanting to do a cabaret in New York City, sort of a young, downtown version of the Carlisle, with young people performing Cole Porter and Gershwin, great cocktails and finger food. I’ve talked to a lot of young people who would love it. I don’t think I can make a lot of money doing this, but I’m looking for a small place.

Sanson: What kind of numbers do you need to consider a project a success?

Starr: I tend to want to do anything that is interesting to me, but in the end it’s exhausting for our people to do something that only grosses $1.5-2 million a year. To make investments now we have to do at least $4-5 million a year.

Melman: We’re all over the map. We’ve done a number of QSR restaurants and we have a place that’s 600 square feet that does $1.5 million. Generally speaking we’re looking to see $1,000-2,000 a square foot, then it starts making sense.

Sanson: Stephen, you were well known in Philadelphia, but were you nervous when you first branched out to New York with Morimoto and Buddakan?

Starr: I was scared to death, but I did feel good about it, because Morimoto was already famous. Then we committed to Buddakan, and I was really concerned because (similar concepts) had already been done there, so I decided we had to shock and awe. I went in with everything I had. If was teaching at Wharton I would say this was the dumbest idea. We spent $28 million, and the budget was $12 million. We didn’t have that money, and we had to perform miracles to find it. But it paid off. Last year we did $22 million.

Sanson: You’re both involved in catering. How do you approach it?

Starr: I could see the growth in these contracts (at museums and entertainment venues) is phenomenal, so we formed a catering business, and we put everything into it. The returns are less, but the investment is less, too. A lot of it is low-hanging fruit because we are competing against big institutions. I see it as a great opportunity with less risk than we would have opening restaurants.

Melman: We haven’t done off-premise catering much. We do lot of catering business, but our plan has been to do it in our restaurants. If I were to draw a circle, and the middle is the restaurant—which costs a lot to build and requires a lot of labor and other costs—then surround that with the bar, which costs less to build, and involves fewer people and higher margins, then catering, carryout and merchandise would be the outer circle. We consciously plan the catering part in a lot of our restaurants. We have about 30 people selling parties in Chicago, so we keep very, very busy.

Sanson: How have your kids and younger staff members influenced your decisions?

Melman: Sometimes it’s difficult, but 95 percent of time it’s been enlightening. They think way different than I did. They are on top of what young people like.

Starr: Young blood is very important. I talk to the rank and file people; I like to find people who go to art school or are in the arts.