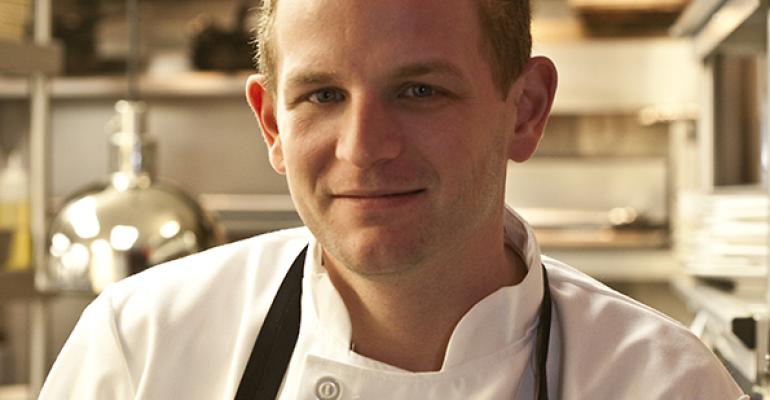 Chris Shea is the executive chef at David Burke Kitchen, the American farm-to-fork restaurant in the James Hotel in New York City. A native New Yorker, Shea's interest in food began at the early age of 12 when he took a job making deliveries for Frank's Market on Manhattan's Upper West Side. Six years later, Shea had moved from delivery to butchering meat at the market while also holding a stagiaire post at a top-rated seafood restaurant, Oceana, in Manhattan.

After attending the Institute of Culinary Education in New York, Shea worked in several city restaurants, including Park Avenue Cafe where he met executive chef and co-owner Burke. In 2003 he rejoined Burke at davidburke & Donatella, now David Burke Townhouse. Over the next eight years, Shea worked for Burke in a number of venues, including David Burke at Bloomingdale's in New York and David Burke Prime Foods at Foxwoods Casino in Ledyard, Conn. He moved to David Burke Kitchen in 2011.

In addition to working for Burke, Shea also appeared with his boss on Bravo TV’s “Top Chef Masters: Season 5,” during which he competed in the Battle of the Sous Chefs segment. “There were a lot of stressful moments but also fun moments,” he said. “I think I would do it again if asked.”

What is one of the most interesting trends you see in fine dining right now?

I think it would be tableside cooking and dining room service where things are finished in front of the guest. Certain restaurants have specialty items like Caesar salad and steak tartare, which are always done tableside. [At David Burke Kitchen] we currently have four tableside preparations — things like salads, carved meats, carved salt-crusted striped bass. We also do fish en papillote, which is nice because the guest gets to enjoy the aroma when the fish is presented.

What else do you prepare tableside?

We're doing a bison tartare appetizer. The bison meat is cut to order and presented in a dice. It's mixed with other ingredients like an egg herb emulsion, confit of porcini mushrooms, sweated shallots and capers, toasted garlic, olive oil, herbs, mustard and sea salt.

Well, we train everybody to do it … all of the servers and the runners. If it's a busy night, I'll step in or the general manager will do it. We find that it's worth it. People like to interact a little, and this gives us the opportunity to explain to the guest what's going on.

Can you talk about some of the other trends you're seeing?

We're seeing healthier and more vegetable-based dishes. And they're only going to grow more popular. Plenty of New York City restaurants have always had vegetarian options or tasting menus, but [offering vegetarian dishes] is no longer just an option. It's a much bigger part of menu development. We design our menus with a minimum of three vegetable dishes now.

What is a popular vegetarian dish?

Right now we're offering a market eggplant trio. It contains charred eggplant baba ghanoush, grilled baby eggplants that are glazed in cumin and orange, and a play on fleischnaka, which is like a rolled lasagna. [Fleischnaka] is usually done with meat, but we make it with roasted eggplant puree, grilled eggplant slices and pecorino cheese. It's rolled into a tube and poached. Then it's sliced and seared.

What do guests want from their dining experience today?

Depending on the venue, I think guests are looking for several things. They want food that is well thought out — that is interesting and flavorful. But it's not good enough for things just to taste good anymore. Guests want to know about the dishes, where the ingredients are from. People are much more informed than they used to be, and they want to make informed decisions. Restaurants need to be able to provide that information. And when people go out to eat, they want to feel good about what they're eating. They want to try different things, but also want to think they're eating something that's good for them.

How would you describe David Burke Kitchen?

I'd sum it up as being regionally inspired, seasonal American. Basically, the strategy is to buy local and seasonal, and when that's not possible, to buy the best ingredients available. For example, we just offered Alaska King Crab, which is one of the most delicious things you can get, but obviously not local.

The restaurant is known for serving whimsical David Burke-style dishes. What is a popular example?

Angry Lobster, which will be available later this month. It's a lobster that's been cut in pieces on a band saw and pan fried with a spicy flour mixture and presented on a bed of nails like a flower arrangement. It's flavored with a sauce that includes lobster stock, chile oil, garlic, lemon, basil and butter.

David Burke Kitchen has been open for three years. How do you keep things fresh?

We just change. The entire menu changes over once every three months … it's completely different. But certain items change constantly. For instance, we'll find something in the market and then make a dish based around that ingredient that day.

Any food trends or fads you wish would disappear?

Not really. I'm pretty much down for whatever. I'm good with anything as long as it’s prepared well. My wife is from Peru [and] there are a lot of distinctive things in Peruvian cuisine. But if it's not well executed, you would think it’s pretty humdrum. But when prepared by somebody who knows what they're doing, you'd think it's awesome. I think of all food like that. A cheeseburger prepared with care — I'm going to love it. And that's true with just about any food.