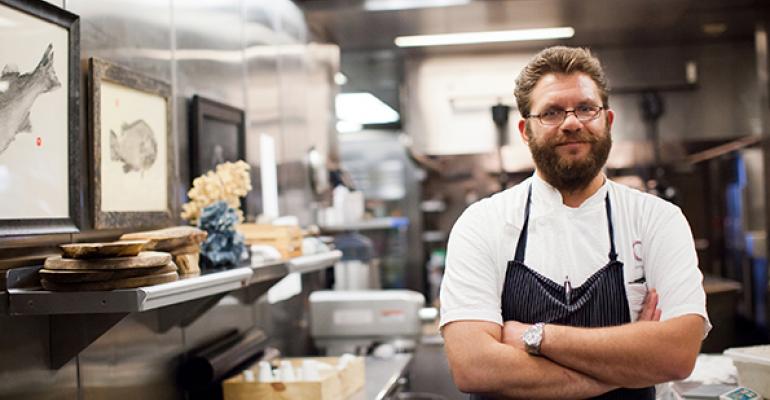 In June, Providence celebrated its 10th anniversary, a milestone indicating a certain staying power for a restaurant that has refused to stray from its original values: serving the best quality seafood from sustainable sources in an atmosphere that is at once comfortable, hospitable—and “grown up,” says co-owner and executive chef Michael Cimarusti. “It’s a place where food and service are taken very, very seriously.”

The restaurant is one of three in L.A. to earn two Michelin stars and it was nominated for a James Beard Award for Best New Restaurant in 2006, after its first year.

Here’s what Cimarusti had to say about his restaurants’ past and future:

Last year you shifted from an a la carte to a tasting menu format. What prompted you to do that?

Cimarusti: We offered tasting menus from day one, but now we offer three tasting menus, and that’s pretty much it, though we do have regulars who have come in for 10 years and prefer to just have a couple courses. But the shift helped us to get closer to our goals, which were to be the very best we could be for every table in the dining room. It helps with consistency and timing and service and everything.

Does it have to do also with availability of ingredients? I know you’re a big proponent of sustainable fishing practices and responsible sourcing. Is that part of it?

Cimarusti: Yes, it definitely fits into that philosophy. We only want to take what we can use and we what we use we want to make sure is sustainably sourced every day of the week, and the tasting menus allow us to do that.

Tell me about Connie & Ted’s. It’s a Rhode Island clam shack, the same quality ingredients as Providence but a more accessible price point. Why do that?

Cimarusti: I grew up eating that food. I spent my summers in Narragansett as a kid. My mother and father met in Rhode Island and my grandmother still lives there. I’ve always had a soft spot for that kind of food and that style of cooking. I wanted to do something true to those roots here in L.A.

How is it going?

Cimarusti: It’s going great. The restaurant’s busy. It’s full every night. It’s a casual place but we take the quality of the seafood and guest experience very seriously there as well. We have a huge oyster bar, one I’m very proud of. And the chef Sam Baxter does an extraordinary job. It has a little West Coast flavor as well, using fish from California, Washington, Oregon and Alaska. It’s all from well-managed fisheries and we are, after all, on the West Coast. So it’s a little of both: the best of the East and the best of the West.

Are you thinking of doing more of those?

Cimarusti: We’d love to do more if we find the right opportunity.

What are plans for Cape Seafood. When will it open?

Cimarusti: Probably in September. We’re in the midst of construction now. What we want to do there is essentially make the raw materials that we use at Providence and Connie & Ted’s available for the general public. It’s a small shop, so it won’t have the biggest selection of fish in the city, but there will be a wide selection and it will be all wild and sustainable. The idea is to bring people a little bit closer to the source.

Purchasing seafood is a bit daunting to many people. People want to buy the right thing but they’re not sure how to do it. These will be all great products that are responsibly sourced.

So will it just be a market then, or will it also be a restaurant?

Cimarusti: Just a market. You will have some prepared items and we’re putting together a smoking program as well, so we will have varieties of smoked fish. We’ll do everything in house.

As someone who’s been cooking in L.A. for about two decades, what do you think of the $15 per hour minimum wage to come?

Cimarusti: It’s something we’re all going to have to face. I think there was a lot of popular support for the idea that the minimum wage needed to be raised. But now the price of business services in L.A. will reflect that.

The general public will have to put their money where their mouth is. If they supported the idea of a higher minimum wage, they’ll have to understand that they’ll have to pay for that. If it costs us more to produce the food we make in our restaurants and serve it, our prices will reflect that. That’s just the bottom line, there’s no real way around it.