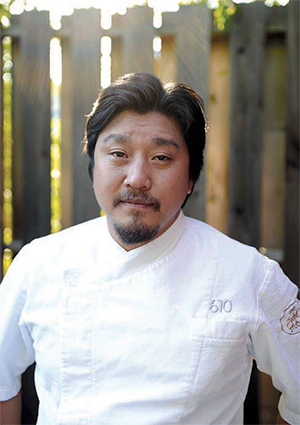 Ed Lee is a Korean-American who grew up in Brooklyn, trained in New York City kitchens and spent the better part of a decade honing his vision at 610 Magnolia restaurant in Louisville. His culinary style draws inspiration from his Asian heritage, his New York training and his embrace of the American South. In addition to 610, Lee also operates Milk Wood, his interpretation of a modern speakeasy that offers Southern comfort food. Additionally, he runs a dining room and cooking class venue called The Wine Studio. Lee has been a James Beard finalist for Best Chef: Southeast several times. His cookbook, Smoke & Pickles: Recipes and Stories from a New Southern Kitchen, was published in 2013.

1. Country ham. It’s an ingredient that’s always in my pantry and we use every part of it. The cured fat gets used in our cornbread; the scraps go into our greens for flavor; the meat around the shin gets dehydrated and ground to a powder, which we use like salt; the bone goes into our ham stock. Each ham gives me so much.

2. Southern Pride Smoker. It’s my best friend in the whole world. The smoker pretty much never goes idle. Aside from our roster of meats that smoke around the clock, I also smoke everything from strawberries to octopus to cheese. It gives me endless pleasure to add smoke flavor to new ingredients.

3. Bourbon. It’s pretty much what I drink, and that’s it. I cook with it. I use the barrels to smoke with and to plate on. I collect vintage bottles. But mostly, I just drink it. And so far, it has never let me down.

4. Quintin Middleton Knives. They are so seamless and beautiful that you’ll forget where your fingers end and where the blade handle begins. Everything else just seems clumsy.

5. My mom’s kimchi recipe. I use her recipe at my restaurants, though I don’t know if it’s exact because she won’t tell me precisely what goes into it. I know... her own son! But it’s pretty damn close and damn good. If I ever get it completely right, I’ll know I’ve made it.