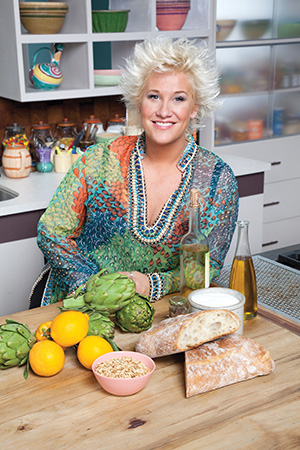 You always know when she’s in the room. If you don’t spot her spiky blonde hair, then you’ll hear her. She’s no wallflower, that Anne Burrell. And that’s why you’ll see her cooking on several TV shows. She was first spotted as Mario Batali’s sous chef on Food Network’s Iron Chef America. She was so good in front of the camera, Burrell landed a number of starring roles, including her current gig as host of Food Network’s Worst Cooks in America. Before that she hosted a number of other shows, including Chef Wanted and Secrets of a Restaurant Chef. Burrell also competed on Next Iron Chef: Super Chefs, proving she is one of this country’s most talented and versatile cooks.

1. Salt, olive oil and bacon. This is the holy trinity in my kitchen. All three ingredients are the bases of so many of my dishes.

2. Wooden spoon and food mill. There’s nothing to turn on. It’s all about what you, as a cook, do with them. I love that everyone, from top-rated chefs to grandmas, has to use them.

3. My own cookbooks. I wrote them—Cook Like A Rockstar and Own Your Kitchen—but I use them.

4. Chef Anne Sparkler. It’s my go-to drink — prosecco on the rocks with a splash of Aperol.

5. Bolognese. It’s my go-to comfort food. It took me forever to learn how to make it properly. Now, it’s always the number one recipe of mine that people come up to me and say they love. It’s also the first dish I ever made on the Food Network.