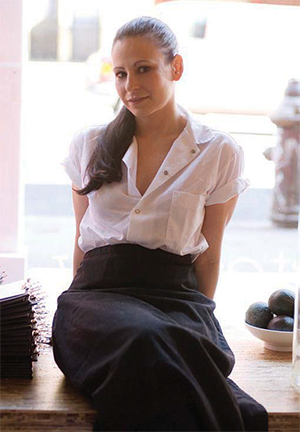 Amanda Cohen is the chef/owner of Dirt Candy, a New York City vegetarian restaurant. In a two-star review, the New York Times wrote: “Eating at Dirt Candy can be like going to a child’s birthday party in a country where all the children love vegetables.” Food & Wine named Dirt Candy one of the 10 best vegetarian restaurants in America. Cohen is the first vegetarian chef invited to compete on Iron Chef: America and is the author of Dirt Candy: A Cookbook, the first graphic novel-style cookbook in the U.S.

2. Deep fryer. People who complain that deep-fried food is greasy are people who aren’t doing it correctly. I don’t want to share oxygen with people who are scared of deep frying.

3. Spiralizer. Get one, stat. It costs $30 and nothing impresses a guest more than augmenting pasta with spiralized zucchini or making potato salad out of spiralized potatoes.

4. Maurillio. He’s my dishwasher. He’ll do anything that needs doing. I would fire every single member of my staff twice before I’d even joke about letting him go.

5. Water and wine. It’s what I drink without much deviation, though during a long week nothing keeps me going more than the dream of a Bloody Mary or six on Sunday.