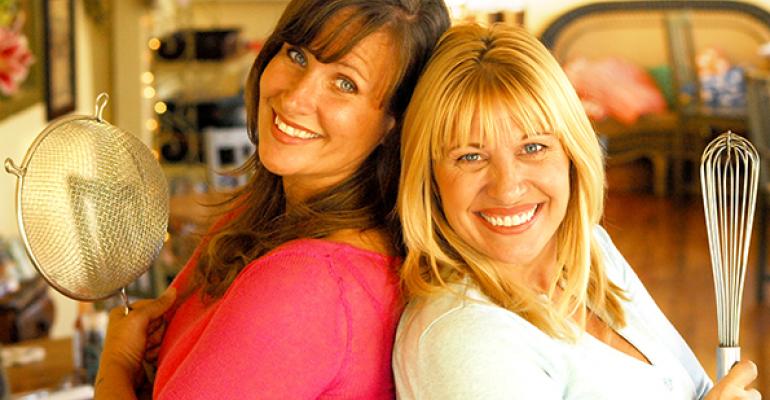 <p>Denise DeCarlo, left, and Betty Fraser created As You Like It Catering and Grub Restaurant in Hollywood, Calif.</p>
People>Chefs

A recent New York Times op-ed by Toronto restaurant operator Jen Agg raised the issue of rampant sexism in restaurants, especially on kitchen staffs. She argued that the long-practiced hazing that occurs is one reason many women either avoid the business or burn out quickly.

But foodservice still has appeal for many women. According to the National Restaurant Association, women own or co-own more than half of all U.S. restaurants, and women-owned businesses are growing at a faster rate than the overall restaurant industry. Additionally, the association points out that 45 percent of restaurant managers are women, compared to an average of 38 percent in other industries.

We asked some female restaurateurs why they chose the restaurant industry and their thoughts on the advantages and future outlook for women in the business.

Erin Archuleta was a school teacher and small business consultant before partnering with her chef husband to form ICHI Dozo Restaurant Group in San Francisco eight years ago. “It was clear about a year into us dating that he was starting his own catering business and could use the support,” Archuleta recalls. “We've been a partnership ever since.”

Betty Fraser was an actress/singer and Denise DeCarlo was an architect before the duo teamed up to become the owners and chefs of As You Like It Catering 20 years ago and Grub Restaurant 14 years ago—both in Hollywood, CA. Affectionately called the Grub Gals, Fraser says they went into the business because they love to cook. “Ironically, when we started our catering company we were cooking all of the time,” says Fraser. “But when it came time to open the restaurant, we took on more administrative roles with operations, television stuff and the catering schedule.”

Emmy Kaplan says she was in her early 20s when she opened Emmy’s Spaghetti Shack in San Francisco in 2001. “Prior to owning my own establishment, I worked my way up from a busgirl at 13 to front-of-house manager at 24,” she says. “Being in my early 20s I had no fear and no idea of what failure was, so I just rushed into my newfound little space with all of my young energy and ideas bursting out of me. I wanted to have a fun place where people such as my service industry friends and I could go after work or on our nights off. I still want that. Being a new mom within my first year of opening, it was also vital that families were very much a part of the fabric of my restaurant.”

While some may consider a sensitive side a disadvantage in business, many women restaurateurs see it as an advantage when it comes to dealing with people, an important aspect of the industry. “The ability to balance taste, design, creativity, management, hospitality and dealing with customers is something that comes more naturally to women,” Blau observes

“I think being women in the industry gives us the best advantage of all,” says Fraser. “Denise and I know how to communicate; we talk to each other and work things through.”

Kaplan agrees, saying that she thinks the ability to put the “I know best” mentality aside may be more of a female trait.

“We all have egos, male and female,” she says. “But I’m proud that I can show my Shack Girls how to be a boss with integrity and without ever talking down to anyone. I let my staff lead me, and I’m always open to input and new ideas.”

Blau says there aren’t a lot of disadvantages to being a female in the industry. But she admits that “there’s still a lot of male chauvinism in the kitchen, and while I don't think that's a disadvantage, and the tide is starting to turn, the back of house and a lot of management positions are still very male dominated.”

Fraser says it’s all in one’s attitude. “We’ve been around this industry for long enough to realize that it's not about gender, it’s about attitude,” she says. “There may have been disadvantages 10 years ago, but not anymore; there are too many terrific female chefs rising to the top, and it's a place they deserve to be.”

Archuleta brings up something that restaurant equipment manufacturers may not have taken into account—the smaller stature of many women chefs and restaurateurs. “I still think most equipment is made for someone taller than 5'2",” she says. “I'd like to see some racks that are made for me!”

Insights into women in the industry

“I’m a trustee at the Culinary Institute of America,” says Blau. “Last year almost half of the students at the CIA were women, and it seems to be growing every year. There’s a great tradition of female restaurateurs, from Lally and Ti Brennan to Egi Maccioni, Barbara Lazaroff, Lidia Bastianich, Alice Waters, Nancy Silverton—the list goes on. I think it’s as good an industry as any for women, especially those with an entrepreneurial spirit.”

Archuleta would like more room for families in the restaurant. “I'd like to see a better opportunity to have a family and still remain in the kitchen or out on the floor,” she says.

“I think as women gain confidence in the fact that they belong in the restaurant world you will start to see more and more of us stepping up to the cutting board,” says Fraser.

Kaplan acknowledges that the restaurant business is tough and takes a lot of energy, especially for women who are also trying to raise children. “Prioritizing family is important, and I know for me being home with my son is the most important duty I have in life, so hiring the right people to be there is key,” she says. “With that said, in San Francisco and Sonoma we have a lot of women running very successful restaurants. It's just a matter of time before women begin to get more restaurants and original ideas on the market.”