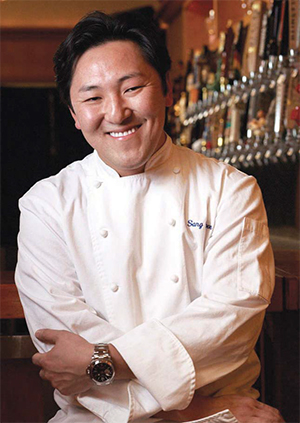 1. One thing you don’t know about me is that I love junk food.

2. If I could trade places with one chef it would be Mak Kwai Pui from Michelin-starred Tim Ho Wan in Hong Kong. I wanted to swap places with him after eating his pineapple buns on my last visit.

3. One of my most memorable meals was at Donburi with my dad in Tokyo. I was about eight years old and he let me have an orange soda, which my mother would have never approved. It was my first guilty pleasure.

4. If there was no ice cream I’d have no reason to live.

5. My go-to drink is Champagne.

6. If I were on death row I’d probably be there for killing a man for his ice cream.  So, my last meal would be ice cream.

7. My worst culinary creation may not have happened yet. Ask me when I retire.

8. If I could change one thing about me I would

be a soba noodle master. It’s impossible to perfect unless you dedicate your entire career to it.

9. My favorite junk food is gummy bears.  Specifically: Champagne gummy bears. I discovered these delightful imports from Germany at Sugarfina, a candy shop in L.A., and have been addicted ever since.

10. If I wasn’t a restaurant operator, I’d love to be a former professional hockey player. I played hockey in college and still play in a league now, which I really shouldn’t be doing anymore at my age, but it’s my only hobby.