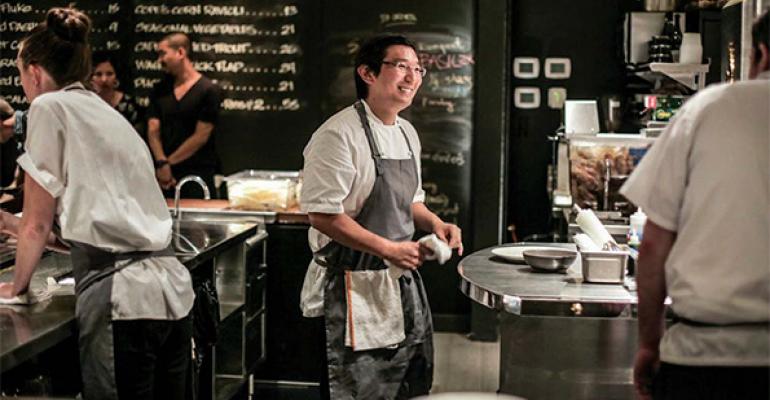 Peter Serpico was the director of culinary operations for David Chang’s Momofuku restaurants for several years before joining forces with restaurateur Stephen Starr to open Serpico, a restaurant that serves global cuisine in Philadelphia.

1. One thing you don’t know about me is that I don’t take myself that seriously.

2. If I could trade places with one chef it would be Alex Lee because he figured out how to be successful and spend time with his family. He used to be the chef at Daniel in New York City and then he moved out to the suburbs and became the chef at Glen Oaks Country Club.

3. One of my most memorable meals was at Jean-Georges for my birthday. The meal and the staff were amazing. JG came out to the table to say “Hi,” looking dapper as always. The pastry chef at the time, Johnny Iuzzini, made a really beautiful blow-it-out chocolate sculpture special for my birthday. They killed us with hospitality, and it was a very special meal that I will never forget.

4. If there were no chicken fingers I’d have no reason to live.

5. My go-to drink is coffee during the day and Fernet and soda at night.

6. If I were on death row my last meal would be a Big Mac with medium fries and a medium Coke from McDonald’s, a personal pan Meat Lovers Pizza from Pizza Hut, three crispy strips with honey mustard from KFC, a Whopper Jr. from Burger King, a Soft Taco Supreme with fire sauce from Taco Bell and a coconut doughnut from Doughnut Plant.

7. My worst culinary creation was, by far, a deviled-egg terrine.

8. If I could change one thing about me, I would like to be an optimist.

9. My favorite junk food is fried potatoes of any sort, mostly French fries.

10. If I wasn’t a restaurant operator, I would be an engineer and take after my father.