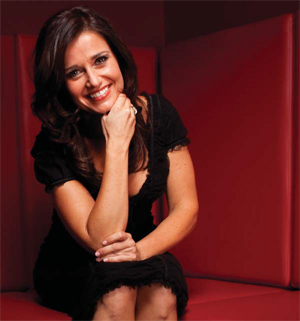 For 20 years Marisa May was the g.m. of San Domenico NY until it closed in 2008. The next year, she and her father, Tony May, opened SD26, a fine dining Italian restaurant in New York City’s Madison Square Park.

1. One thing you don’t know about me is that I have a tattoo. I won’t tell you where, but I got it with my girlfriends on Canal Street while attending New York University.

2. If I could trade places with one person it would be Gail Simmons. She’s done so much these last 10 years between judging Top Chef, her new book (Talking With My Mouth Full), her beautiful family and the magazine (Food & Wine). She balances it all so well and really took her passion for food to the next level.

3. One of my most memorable meals  is a toss-up between my gorgeous meal at Il Bulli in Spain, my first time at Torre del Saracino in Italy (near Naples), and my first time eating at San Domenico in Imola, Italy. I was 15 years old at San Domenico sitting with the owner, the chef and my dad, Tony May, who talked about opening San Domenico NY, in 1988.  It was an unbelievable meal, my first experience at a Michelin-starred restaurant and one of my favorite food memories.

4. If there were no pasta, I’d have no reason to live. I can’t live without pasta, even if I’m on a diet!

5. My go-to drink is a spicy, smoky margarita with salt. I love Jim Meehan’s Margarita at PDT (a New York City speakeasy).

6. If I were on death row I’d start my last meal with guacamole and a big bowl of chips from ABC Cocina. Then I’d have the Bucatini All’Amatriciana at Sandro’s in New York.  It’s a rich, beautiful dish made with guanciale, pecorino and tomatoes. Then, I’d have my SD26 chef Matteo Bergamini make me his Rosemary & Fennel Seed-Roasted Porchetta on a Rosetta Roll. For dessert, I’d eat a trio of yogurt, chocolate and stracciatella gelato from the Gelateria Buonocore on the Island of Capri.

7. My worst culinary creation was the first time I made Spaghetti alla Puttanesca alone. My dad taught me how to make it right, but I put way too many anchovies in the sauce and it made for a salty mess. The dish was completely inedible.

8. If I could change one thing about me it would be the ability to know when to stop eating. I order too much and then I eat too much.

10. If I wasn’t a restaurant operator, I’d love to be a star on Broadway! I studied voice at NYU and I wish I was still involved in performing. I’d love to play the lead in Mamma Mia on Broadway here in NYC!