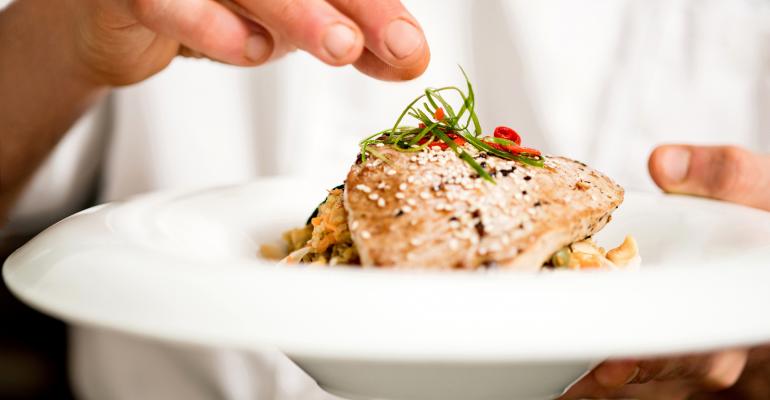 Special ingredients can be the most convenient and affordable flavor enhancers.

Whether complex or simple, nearly every highly successful recipe includes an ingredient which elevates a dish from good to great. These versatile ingredients tend to be readily available and inexpensive, and in many cases can be found in multiple preparations enabling operators to offer customers a wider range of menu choices.

“Everybody’s got a go-to like that,” says Levon Wallace, executive chef at Gray & Dudley restaurant in Nashville, Tennessee. “Mine keeps changing with the seasons.”

Drawing on this summer’s harvest, Wallace has created a chopped herb and oil mixture he unglamorously calls “parsley sauce.” Describing it as being like gremolata and chimichurri, he says its flavor comes from “tons of fresh chopped flat-leaf parsley, which adds so much brightness and freshness to a dish.”

Added to the fresh parsley are chopped shallots, chile peppers, garlic, white wine vinegar, celery, lime zest and olive oil. He lashes roasted meat with it, tosses fresh greens in it and brightens a rustic ratatouille with a spoonful or two.

Alfred Portale, executive chef and co-owner of Gotham Bar and Grill in New York, leans toward the dry side, seasoning all meats, seafood and grilled vegetables with chipotle powder to add “gentle smoke and mild heat.” And instead of ordinary black pepper to finish dishes, he sprinkles them with ground espelette to add mild heat and some red accents. “It is a great addition to dressings, mayonnaise, warm olive oil-based sauces and vegetable dips like hummus,” he says.

Danny Grant, executive chef at Maple & Ash in Chicago, concocted his own blend of brown butter with crisped chicken skin, shallots and garlic to make what he calls “savory sprinkles.”

“I like to use it as a topping on salads, deviled eggs, baked chicken breast and mac and cheese,” Grant says. “It adds this crunchy-buttery flavor to everything.”

He calls another of his flavor boosters “beef butter,” which consists of red wine reduction, beef jus, garlic and herbs. Most everything at Maple & Ash gets a bit of it, he says, and “at home I like to add it to rice, popcorn, noodles, steamed or stir-fried veggies and, of course, steaks.”

Prepared dressings and sauces can also be used to enhance an otherwise bland dish. While Ken’s Dressings were created for salads, chefs recognize their versatility for adding surprise flavors and helpful textures to many dishes. Ken’s Ranch Dressing blended with mashed avocado and hot sauce makes a flavorful topping for fish tacos, while a drizzle of Ken’s Balsamic Vinaigrette adds tang to a savory butternut squash pizza. For extra moisture in Greek meatballs, a dose of Ken’s Greek Dressing does the trick, while adding pizzazz to ordinary Greek yogurt for a delicious dipping sauce for the meatballs.

Several of the chefs interviewed professed a love of Asian fish sauce for delivering a welcome jolt of umami to their dishes. TV Top Chef Katsuji Tanabe, who operates Barrio in Chicago, uses barrel-aged fish sauce to add “a depth of flavors … to sauces and marinades” and “as a substitute for salt.” He’s also fond of Mexican olive oil for the pleasantly bitter and fruity flavors that it brings to ceviches, roasted chicken and pasta — even desserts. “Yes, you can use olive oil for finishing desserts,” he says.

“It adds a depth that no one can really detect as fish sauce,” she says. But the Korean-American chef is equally fond of earthy gochujang paste, which she says gives foods subtle depth and complexity. “It’s any Korean’s secret ingredient to take anything to the next level.”

For Bryan Florence, executive chef and partner at Seasons 52 in Raleigh, North Carolina, a 15-year-old balsamic vinegar adds seasoning versatility to a wide range of savory and sweet dishes. It’s the final flourish for an oven-roasted, prosciutto-wrapped, Gorgonzola-stuffed fig, and the zesty finale for a sandwich of grilled vegetables, portabella mushrooms and burrata.

“We use eight to 10 vinegars daily to add some tang to dishes like our Asian-glazed sea bass with sherry vinaigrette,” Florence says. “But it can move to the dessert side of the menu, too.”

For a seasonal dessert featuring strawberries, servers bring aged balsamic to the table in a pipette and apply it to the fruit.

“The sweetness from the vinegar works surprisingly well with the berries,” Florence says. “It’s a neat flavor profile that people don’t expect.”

Chefs aren’t the only beneficiaries of such easy seasoning solutions; customers benefit as well. And as their demand for choice and variety increases, it makes more sense than ever to have such quick fixes available to “wow” them.