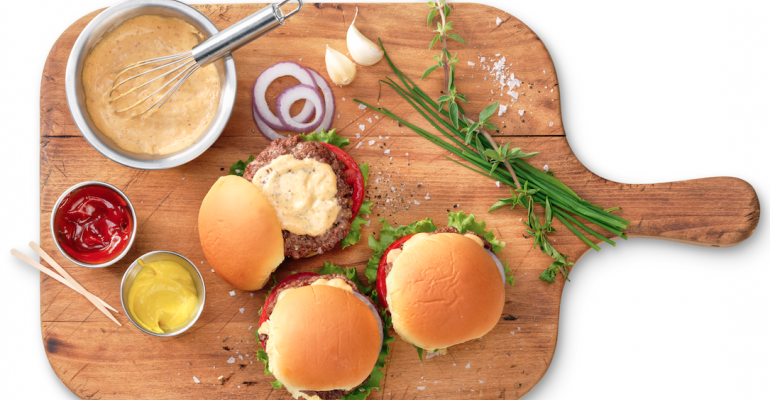 Offering a variety of sauces can help take sandwiches to another level, drive frequency.

America’s love affair with the sandwich has been red hot for decades and shows no signs of diminishing — thanks in large measure to the bold flavors of companion dressings operators are menuing coast to coast.

With restaurants offering sandwich sauces such as pesto, sweet chili, Ranch, Parmesan, peppercorn, blue cheese, garlic aioli, Caesar, Sweet Vidalia and a host of flavored mustards and flavored mayonnaises or aoli, guests are discovering that creativity and customization give them ample reason to come back for more.

“Introducing sauces to sandwiches is a great way to kick it up a notch and place your own signature on the menu item, allowing it to be a focal point for the consumer,” says Jeff Denton, owner of TS Fork, Salt Fork Kitchen Market and The Brick House Grille, in the Tonkawa, Oklahoma, area.

Denton says dressings broaden a restaurant’s selection by allowing guests to enhance and customize each sandwich.

Maeve Webster, president of Menu Matters and trends analyst, agrees but asserts there are an infinite number of sandwich possibilities that have yet to be discovered.

“There are countless dressings, sauces and dips from international cuisine that haven’t even been leveraged for sandwiches. There are international versions of sandwiches such as the banh mi that have not yet impacted American menus,” she says.

Thom Sehnert, owner of Annie Gunn’s and The Smokehouse Market in Chesterfield, Missouri, and winner of the International Foodservice Manufacturers Association’s 2016 Silver Plate award for independent restaurants, says a pineapple coconut mango tequila sauce on a ham sandwich recently “wowed” him. “The sauce made the version of the classic Cuban ham sandwich [Cubano] simply outstanding. It took the sandwich to a whole new level.”

At Navy Dining Services in the Southwest, guests are taking notice of a Sweet Vidalia sauce used to complement a signature burger. “We have used the Sweet Vidalia Onion by Ken’s on our Brunch Burger. It's a great taste profile combo with the burger, bacon and sweetness of the Vidalia sauce,” says Nichole Mischo, regional business activities manager of Dining Services for Navy Region Southwest. She says her group is just beginning to experiment with different sauce profiles but initial results are trending positive. Middle Eastern and Korean flavors are other sauce profiles finding their way onto American sandwich menus.

“All the flavors give chefs a lot to work with. They inspire the style of sandwich from an American Hoagie to an Italian Panini. These sauces add to the flavor and the inspiration of the sandwich,” says Andrew Freeman, owner and president of Andrew Freeman & Co., restaurant and hospitality consultants. “With today’s dining trends going more global, these sauces enhance the flavors and the offerings.”

Sandwiches, which are popular across all segments of the foodservice industry, have been the mainstay of countless quick-service, fast casual and casual restaurants, not to mention colleges and universities where food trends often get a start.

Ron DeSantis, former consultant at the Culinary Institute of America and now director of culinary excellence at Yale Hospitality in New Haven, Connecticut, says the bread and sauce are the most important ingredients in a sandwich, but it’s the sauce that provides the real kick.

“Sauce adds flavor, texture and moisture,” he says. “The sauce brings everything together in a sandwich, as long as it complements the other ingredients.”

DeSantis emphasizes that it’s key to use just the right amount of sauce.

“Too little sauce and it gets lost and the sandwich is boring. Too much sauce and the other ingredients are lost — in other words, no balance.”

Sauces, which can be menued on both hot and cold sandwiches, bring great versatility to any kitchen operation.

“Sauces are incredibly versatile back of the house tools as virtually all can be used for many other applications from appetizers and salads to pizzas, entrées and pastas,” says Webster. Sauces also are popping up as dipping sides to sandwiches, an application which allows the guest to control how much they consume.

“I love the idea of having a dipping sauce with all sandwiches,” says Freeman. “Most consumers like to control the amount of dressing they put on their salads — dressing on the side, and now with sandwiches — we can follow the same trend, sauce on the side.”

But Webster cautions operators should always be savvy about how best to offer sauce on the side.

“I think if operators are looking to offer a dipped sandwich, they have to think hard about the size of the sandwich, how easy the sandwich is to manipulate during the dipping and what container is used to provide the dip,” she says. “If it’s too small, it then becomes a frustrating experience for the patron.”

In today’s ultra-competitive sandwich market, sauces are perfect enhancements which allow chefs to kick up the flavor and at the same time customize the experience.

Letting guests control the food experience is always a plus, no matter the venue or size of restaurant operation. “Let’s face it — it’s all about customization right now so the sauce can be the finishing touch on a very unique sandwich,” says Freeman.