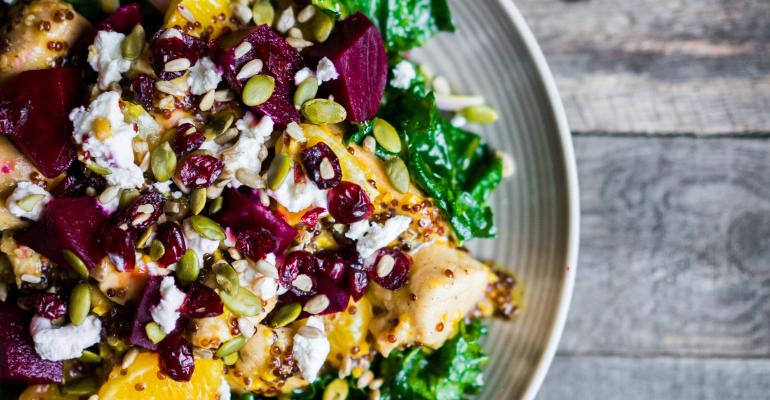 Innovative fall salads keep menus fresh and relevant for customers. Starring as main courses, starters and side dishes, they are springboards for local ingredients, global flavors and healthful eating.

While for some the term “salad” may still conjure up the traditional medley of leafy greens, tomato and cucumber, seasonal ingredients paint a more colorful picture on menus today.

The top flavors/ingredients on fall salads across all U. S. restaurant menus are apple, cranberry, onions, tomatoes and goat cheese, according to the market research firm Technomic. Ingredients which have been increasingly featured in fall salads over the past year include:

“I like the seasonal aspect of salads because it takes us back to what we should all be eating, which is seasonal produce,” says Chris Dahlander, founder and chief executive of Snappy Salads, based in Dallas with 17 units. “We have eliminated seasons from the grocery store, where people find things like apples, potatoes and onions available all year.”

“This will be an opportunity for us to share a salad with people who are creatures of habit,” says Dahlander. “This seasonal salad might be the one that takes them out of their routine.”

Seasonal salads like those “show our guests that we are keeping it fresh and offering items that will make them salivate a little more,” says Dahlander.

Distinctive dressings also provide chefs and operators with options for creating fall signature salads. Ken’s Foodservice dressings include offerings such as Apple Cider Vinaigrette, Sherry Shallot Vinaigrette and Lime Vinaigrette Dressing and Marinade. For an extra flavor twist, combine one of those dressings with fresh ingredients. An example is cilantro and lime dressing made by adding chopped cilantro to Ken’s Lime Vinaigrette.

Research indicates how seasonal salad claims resonate in the marketplace. Sixty-five percent of consumers associate seasonal ingredients with improved taste, Technomic reports. A significant majority (64 percent) say they are more likely to purchase salads with seasonal claims — an attitude that is even more widespread among younger consumers (72 percent). In fact, 38 percent of younger consumers say they are more inclined to purchase, and are willing to pay more for, salads billed as seasonal, compared to 29 percent of the overall population.

Stellar salads are high in the customer consciousness at Shaw’s Crab House in Chicago, one of the Lettuce Entertain You Enterprises' restaurants based there. In addition to an array of finfish and shellfish offerings, Shaw’s is known for a signature seafood salad topped with shrimp, Alaskan king crab and Maine lobster, and salad-like tuna and salmon poke bowls which showcase fresh raw fish and a variety of vegetables.

In another nod to lighter eating, the kitchen sometimes tosses together seasonal salads to garnish fish entrées in lieu of rice or potatoes.

“Our chef may mix a nice little apple salad to go with a piece of grilled swordfish or offer pumpkin with walleye later in the fall,” says Shaw’s managing partner Bill Nevruz. “Little salads go great with fish. People really appreciate that it’s not a heap of mashed potatoes with butter. They’re eating fish because they want a meal that is lighter if not healthier.”

Ken’s Foodservice dressings are versatile tools for creating fall salads. Ready-to-use dressings streamline the creative process by allowing operators to focus on preparing fresh produce. They also eliminate a lot of laborious cutting, measuring and mixing. Here are some salad suggestions for the season:

The arrival of fall heralds a major opportunity for chefs and operators to create signature salads with seasonal appeal. Working with fresh, local produce, premium proteins and dressings that highlight on-trend flavors is a proven way to attract customers and bring them back for repeat visits.