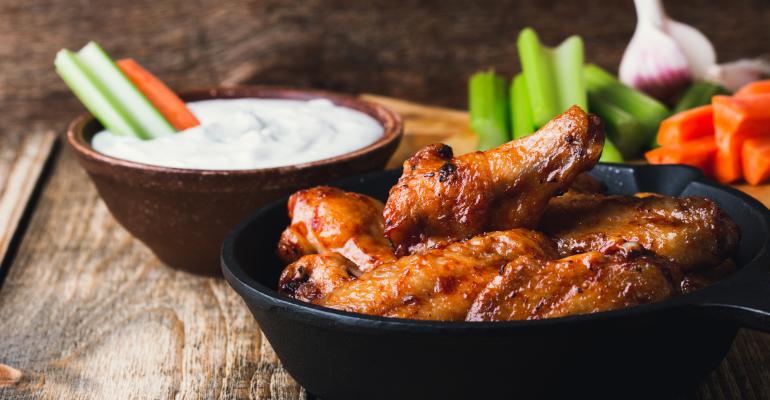 While football season for many Americans means Sunday get-togethers, fantasy leagues and tracking their team's progress on large-screen TVs, restaurateurs also recognize that it's the perfect time to focus on happy hour promotions.

Football and food have always been closely intertwined, and highlighting that relationship with offerings has emerged as a winning approach for operators in recent years. “Typically, football games are shared among friends and family, and create the opportunity for high-volume food and beverage sales,'' says Arlene Spiegel of Arlene Spiegel & Associates in New York. ''Guests stay in place for the duration of the game, allowing for many dining purchases. And the items that a restaurant would offer at happy hour are usually the same items that are perfect for sharing during a football game. It’s a ‘tailgate experience’ without going to the actual game.''

Lucrative opportunities
Clearly, the relationship between football and food presents a lucrative opportunity for restaurateurs. The Super Bowl, for example, ranks as the second-largest food consumption day in the U.S., surpassed only by Thanksgiving. According to the National Chicken Council, Americans consumed 1.33 billion chicken wings over the 2018 Super Bowl weekend alone. And while some restaurateurs make the most of this annual event by showcasing their own signature barbecue sauces and flavorings, others look to national brands such as Sweet Baby Ray's to provide them with a variety of high-quality alternatives for popular wing dishes and other barbecue items.

But the Super Bowl does not represent the only opportunity for operators to leverage the nation's most popular sport into sales. The National Football League's regular season begins the weekend after Labor Day in early September and extends for 17 weeks of regular games — a time when restaurateurs find great success catering to their customers' months-long football frenzy with happy hour fare designed to be shared among friends or eaten individually.

Restaurant deals
Today's restaurateurs appreciate the importance of menuing quality foods during happy hour. “Our customers have changed over the years,” says Bob Barry, president and CEO of The Greene Turtle, a 49-unit casual-dining/sports bar chain based in Columbia, Md. “Not everybody had a large-screen TV before. Now they do. And they can also watch games through their phones or iPad[s]. So we have to focus on making sure the guest has an enjoyable, relaxed experience — and that means having great food to share.”

Restaurant deals also offer a proven way to attract customers. According to the Value and Pricing Consumer Trend Report, 2017, 46 percent of younger consumers seek out restaurant deals and promotions more often now than they did two years ago. The report also found that happy hour specials are likely to encourage 61 percent of Gen Zers to visit a restaurant.

Meanwhile, 38 percent of consumers say they would be encouraged to order small plates more frequently if offered at a happy hour discounted price; 43 percent of Gen Zers say the same.

The Greene Turtle offers two-for-one drinks during NFL games and all shareable bites are available at half price during happy hour from 3-6 p.m. and late night from 10 p.m. to closing. Guests at casual operator TGI Fridays can order from the Fridays Five Menu, which features a variety of $5 alcoholic beverages, and $5 bar bites including Cajun Fries and Boneless Wings with a new spicy sauce.

The right menu items
While merchandising happy hour promotions represents a productive strategy for attracting game day fans, it's essential that a restaurant offer the right food items. “Happy hour menu items should generate reasonable volume for the cost — like nachos — possess high-flavor profiles and are easy to share,” says Dennis Lombardi, president of Insight Dynamics, a restaurant advisory service in Columbus, Ohio. “Customers probably don't want to sit there carving up a steak while watching the game or talking with friends."

Spiegel says happy hour shareables can include such items as meat and veggie burger sliders, fried vegetables and cheese, charcuterie and crudités, and flatbreads and dips. She also adds that traditional and boneless wings are the ''perfect'' canvas for a creative chef when served with a variety of sauces ranging from the typical blue cheese to spicy Korean — an Asian-inflected barbecue sauce that is gaining in popularity and is also available from Sweet Baby Ray's. ''Wings are the chameleons of the happy hour world and can become whatever the chef wants them to be,'' she says.

Give them choices
Not surprisingly, operators seek to offer today's consumers a range of choices. The Greene Turtle, for example, offers a selection of some 20 shareables including a choice of Hand-Breaded Tenders and 100 percent All-Natural Wings served with a variety of flavorings and sauces — notably barbecue variations. The chain also offers its meaty Hog Hammers — bone-in barbecue pork with onion straws. The Hog Hammers are available with Bangin' barbecue, smokey barbecue, golden barbecue and spicy barbecue — as are the wings.

Stan Dorsey, director of research and development for Tampa, Fla.-based craft beer and entertainment concept The Brass Tap, features happy hour items priced between $4 and $7 each. Selections include cheese quesadillas, avocado toast and Boom Boom Shrimp. While the 49-unit chain features a separate happy hour menu, guests can also request almost any item on the menu to be shareable. For example, several regular-sized dishes such as Korean BBQ Sliders, Korean BBQ Pulled Pork Tacos or Korean BBQ Pulled Pork Nachos can be ordered as shareable portions.

Food sales generated during happy hour is a ''huge deal,'' says Dorsey. ''It can run as high as 35 percent of sales in some locations.''

To be sure, sharing plates and finger foods are perfect happy hour options, Spiegel says, adding that happy hour is also a good time to introduce new food items and to get instant feedback. However, she advises, ''Operators should always try to keep the presentations and quality ingredients that relate to their regular dining options.''

For those savvy foodservice operators who are looking to maximize happy hour opportunities during football season or are just looking to refresh or update their menus and seasonal recipes, Sweet Baby Ray's can provide a flavorful, labor-saving solution.