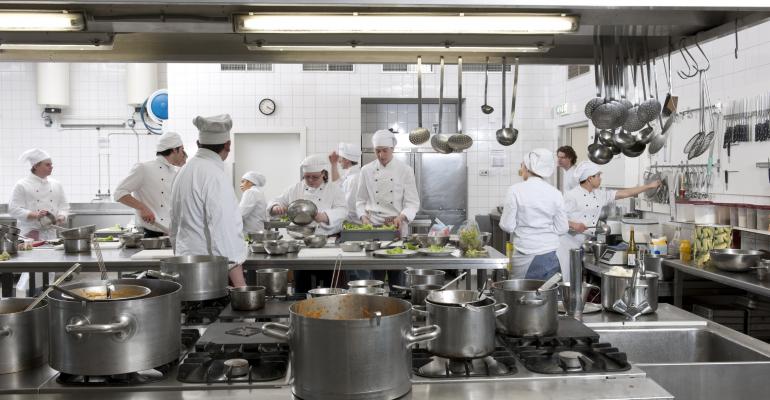 Operators can cut costs by rethinking not just labor but also the supply chain.

Margins are razor thin in the restaurant business, so operators are looking for inventive ways to pare costs. According to the National Restaurant Association in its Restaurant Trends Survey 2016, while recruiting and retaining employees was the top challenge for many operators, food and labor costs were also among their biggest concerns.

Here are some ways to reduce labor costs in the back-of-the-house.

It makes sense to buy high quality foods that eliminate some of the food prep work, says Bruce Reinstein, president of Consolidated Concepts in Waltham, Massachusetts. “Say you buy chicken breast with a half-ounce of fat,” he says. “You have an employee trim a half ounce of fat and they trim a half ounce of chicken too, and throw it in the trash. You are paying for labor and chicken.”

The same holds true for other ingredients, such as broccoli florets getting thrown away with the stems. It is better to buy the chicken already trimmed or the broccoli florets only. “Food and labor are separate line items, but when you combine them as the cost of goods sold, they really are together,” Reinstein says.

Having the purveyor cut the meat not only reduces waste, but it frees up kitchen staff to perform tasks in which they excel, says Eric Stangarone, founder, partner and culinary director of En Su Boca Taqueria + Cantina and Beauvine Burger Concept in Richmond, Virginia. His restaurants go through about 400 pounds of pork butt each week, so he buys it already cut. This also saves space in the kitchen, as no one has to set aside an area for a worker to spend hours cutting pork.

“The purveyor can do it faster and better,” Stangarone says. “I want the cooks to be mastering certain things, not cutting big blocks of meat into smaller pieces.”

Sauces are another area in which operators can save labor by buying ready-to-use products. Ken’s Foods offers an extensive product portfolio of ready-to-use sauces, including their new line of Signature Sauces such as Basil Pesto Aioli, Remoulade Sauce, Brewpub Mustard, and others. These sauces can save hours in the kitchen by eliminating time-consuming prep tasks such as chopping, measuring and mixing ingredients for scratch-made sauces.

Back-of-House recipes can vary from one batch to the next, in terms of flavor, color, and viscosity.  Ready-to-use sauces can provide consistency, so every batch, in every location, will have the same flavor and viscosity.

Ken’s Foods Signature Sauces are versatile and can be used as a dip, on a sandwich, a pizza, and more. Even further, they can be combined with other pantry ingredients to make your own signature sauce. For example, Ken’s Garlic Aioli, mixed with fresh cilantro and lime juice, makes a great sauce for fried calamari. The Garlic Aioli can also be used as a base to make Sriracha Aioli, which can add kick to sweet potato fries, sandwiches, and burgers.

Streamlining the menu can help the kitchen to run more efficiently. At fine-casual Greek restaurant Souvla, with three locations in San Francisco, the menu is limited. “That comes from the counterintuitive belief that the consumer doesn’t want choice,” says chief executive and founder Charles Bililies. “They really want to go to a place that does one thing well.”

Operators should also limit how often they prepare items, says Dean Small, founder and managing partner for SYNERGY Restaurant Consultants in Newport Beach, California. Think of the restaurant as a manufacturing facility, he says. “If you have a 50-item menu, that means you have 150 production items you have to make.” Instead of making tomato sauce from scratch every day, staff should prepare a larger batch twice a week.

That’s another advantage of using ready-to-use sauces: They have a long shelf life, so the operator does not have to spend time making, and remaking, every sauce or dressing a few times a week.

At Sharky’s Woodfired Mexican Grill, the Big DOG, or Daily Operations Guide, is a list of systems and activities that takes each workstation and breaks down activities each worker needs to do to set up the next shift for success. “Moving quickly and efficiently and having every tool at your hand, every ingredient you need when you need it is exceptionally helpful,” says David Goldstein, chief operating officer. “The Big DOG has saved us an hour per shift per day, on both sides, front-of-house and back-of-house.”

Everyone Is an Expert

Another counterintuitive best practice is to have each worker do one task. “When we get busy, one person will just be making dough and tossing it; the next guy makes the pizza on the peel and the next guy cooks it,” says Ethan Stowell, owner of Ballard Pizza Co. and other Seattle restaurants. “Three people can put out a lot more pizza.”

Managers should train employees for their position, and make sure they stay in their position, says Manolis Alpogianis, co-founder of America’s Dog And Burger in Chicago. “Often employees want to jump into different positions during peak times, but what we've found is that line jumping causes their own station to back up or causes tickets to get neglected. By letting workers know ahead of time which position they will work, the four-location eatery was able to decrease the line by two people, and the average ticket times went from 12 minutes to four minutes.

At Chicago-based Potbelly, the way to save labor is to save steps, says Chris Birkinshaw, senior director of domestic franchising. “Observe your team during peak business and count any unnecessary steps or movements. What may seem like one or two steps out of the way to complete a task, when done repeatedly, can turn into miles of extra walking.”

Getting in front of labor costs starts with scheduling correctly, says Uriah Blum, vice president of operations for Vitality Bowls, based in San Ramon, California. The company uses software that forecasts average sales, factors employees’ pay into the equation, and builds a schedule around the location’s labor percentage goal. There are real-time reports that show current generated revenue versus employee labor. “We can cut shifts or send people home early if our labor is running high,” Blum says.

Hiring is important too. “I can’t stress the importance of hiring the right person,” says Sterling Robinson, proprietor of Billy's Inn/North County Restaurants in Denver. “I will look at 100 résumés to call 50 people to interview 30, to hire two, to keep one.” He estimates the cost of hiring someone is $5,000.

Reducing labor and controlling labor costs affect the establishment’s bottom line, says Mary Jane Riva, chief executive of Pizza Factory in Oakhurst, California. “Labor, taxes and workers' comp are all tied together, so keeping labor in line reduces several categories,” she says. “Use a good POS system to track labor, have a good training program and cross train. Ultimately, it's the leader who is going to help maintain good labor.”