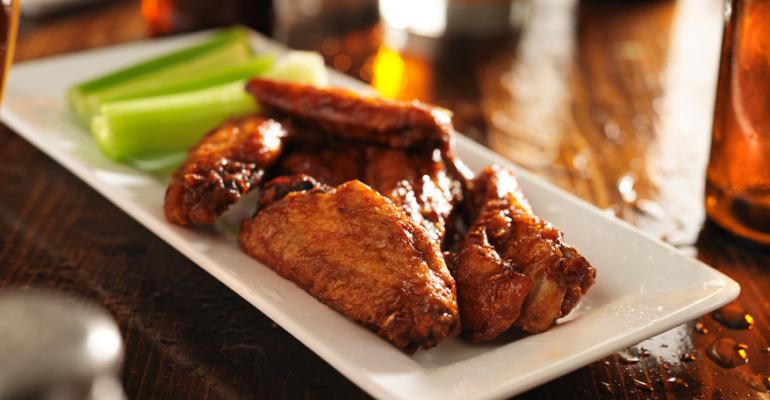 Chefs and operators are amping up flavors, variety to satisfy evolving customer demand for chicken wings.

Even though beef is in the name, chicken wings are one of the most popular menu items at Beef 'O’Brady’s, says Stan Dorsey, director of menu development for FSC Franchise Co. LLC, the Tampa, Florida-based parent of the family sports bar chain.

“Wings are carriers for the sauces and the flavors,” Dorsey says. “It’s not the chicken; it’s the sauce.”

And consumption is expected to increase during the upcoming fall football season, culminating with the Super Bowl.

“Wings have never been as popular as they are right now,” says Elliot Jablonsky, research and development chef for Columbus, Ohio-based Buffalo Wings & Rings.

Growing sales — and stiff competition — across the foodservice industry are inspiring operators and suppliers to increase the variety of treatments and flavors for chicken wings. According to Chicago food marketing research firm, Datassential, top wing flavors include Korean, sriracha and peanut. Milder flavors have also increased over the past year with salt and pepper up 30 percent, and garlic Parmesan up 27 percent. Suppliers such as Sweet Baby Ray’s also are focused on creating a range of popular flavors like Garlic Parmesan, Sweet Teriyaki, Sweet Red Chili, Mango Habanero, and Kickin’ Bourbon Molasses to help operators meet the demand for variety.

Beef 'O’Brady’s offers 13 sauces and three dry rub flavors, including a lemon and pepper rub. Its newest barbecue sauce, Kentucky Bourbon, has been a hit with customers, Dorsey says.

While some operators choose to make their sauces in-house, an increasing number are looking to suppliers for variety, inspiration and convenience when it comes to flavoring their wings. “It helps to have a supplier with a nice stable of offerings you can pick from,” Dorsey says

With its own mild flavor, chicken easily adapts to the flavors of seasonings and sauces, observes Jablonsky of Buffalo Wings & Rings. “White meat and chicken has a perception of healthy — yes, we bread it and fry it, but we also grill it,  which is a better option for some of our guests,” he says

Because the chicken wings themselves are relatively neutral in flavor, chefs are going for bold flavors where rubs and sauces are concerned.

“The expectation, particularly in sports bars, is for a big flavor profile and spice,” Jablonsky says.

Canela Bistro & Wine Bar in San Francisco is not a sports bar, but the call for bold flavors with wings still holds true. Chef Mat Schuster often adds wings to the fall menu but puts a Spanish twist on the appetizer. The spicy sauce for the wings is made with roasted red Spanish piquillo peppers, guajillo chiles, garlic, pureed tomatoes and smoked Spanish paprika.

“Chicken is pretty mild, but once you fry it it becomes very juicy,” Schuster says. “Add some spice and heat and garlic, and it becomes a very savory, mouthwatering dish.”

Customers have come to expect hot flavors, even if they are not the top sellers, says Stephen Snyder, systems manager for Native Grill & Wings, a family sports bar concept based in Chandler,  Arizona.

For years Native’s best-selling wing flavor was Honey Hot, a mix of honey and hot sauce. Two of its newer flavors are in that same vein — mixing sweet and spicy — Habanero Mango and Honey Chipotle. But the third is the Ghost Sauce, made from the extremely hot ghost pepper.

“We know Ghost is not going to be a top seller, but as a wing place you have to have something incredibly spicy,” Snyder says.

Executive chef Mike Ward of The Restaurant at Wente Vineyards in Livermore, California, brings back wings every fall, although for the past few seasons, his twist on the appetizer is to use duck wings.

The duck wings are brined over night, rolled in a rice flour batter and then fried. The result is wings, crispy on the outside, and moist on the inside. The wings are tossed in a hazelnut blue cheese sauce.

“They are really good,” Ward says. “It was a way to take chicken wings to the next level.”