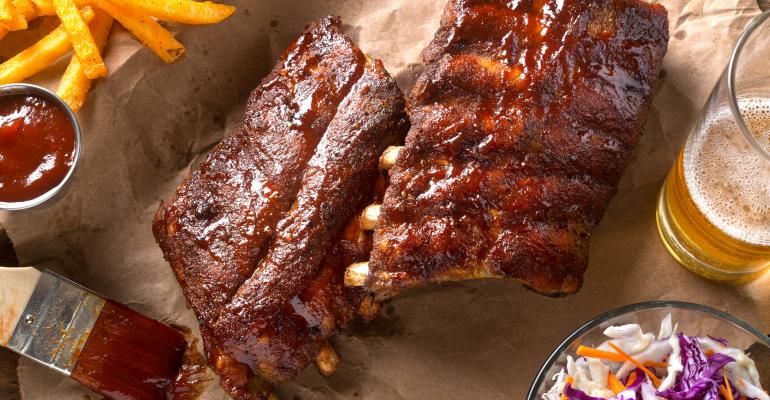 While consumers pursue their cold-weather quest for palate-pleasing comfort foods, many are looking for the kind of sweet and spicy profile that only barbecue can deliver.

Comfort foods have always been popular, but their prevalence on menus has exploded over the last few years, says Dale Miller, president of Master Chef Consulting Group. “In these challenging times, people realize more than ever the need to get grounded and back in touch with their roots,” Miller says. “Eating comfort foods is the perfect way in which this can be accomplished, as the smell, taste and feeling can be emotionally calming.”

For restaurateurs seeking to expand their comfort food catalog, barbecue, with its pleasingly sweet and smoky flavors, offers a perfect, versatile solution. Not only is barbecue popular among a wide range of Americans, but its distinct and pleasing flavors can be easily incorporated into a wide range of dishes, cuisines, and preparations.

“Even though barbecue is so unique from region to region, it is embraced by the American consumer as a back-to-your-roots comfort food,” Miller says. “The word ‘barbecue’ is universal and evokes a feeling of warmth and familiarity.”

Consumer appeal
According to a recent study conducted by research firm Technomics for Sweet Baby Ray’s sauces— “sweet” and “smoky” rank among the most popular basic flavors for consumers, with 52 percent and 51 percent of those respondents stating that they found the flavors appealing. Similarly, the most popular flavor combinations were those that included “sweet and smoky” (51 percent) and “sweet and spicy” (47 percent).

But the uses for barbecue are always expanding. The Technomics study, for example, also found that barbecue chicken entrées were rising in popularity, and featured 7 percent more on leading restaurant menus in 2018, while 7 percent more foodservice operators called out barbecue sauce on their boneless Buffalo wing formats than in the year before.

Stan Dorsey, director of research and development for The Brass Tap and Beef ‘O' Brady's concepts, agrees that barbecue “fits readily into the comfort food category.” However, not all barbecue-flavored menu items necessarily take the form of traditional American dishes and flavors. In fact, one of the biggest culinary hits for The Brass Tap  has been its Asian-inspired line of Korean BBQ items.

Familiar with a twist
''Korean BBQ is a huge addition to our menu,'' Dorsey says. ''It's extremely popular. Our guests get to eat something familiar — but with a twist.''

Brass Tap guests who want to enjoy the flavor of Korean BBQ can choose from items such as:

These Korean BBQ items have proved so popular for The Brass Tap that plans have already begun to incorporate them into the Beef ‘O' Brady's menu next May.

Opting for quality branded sauces
Rather than prepare its own proprietary sauces, Brass Tap flavors its Korean BBQ line — along with other barbecue items such as wings and burgers — by turning to sauces crafted by Sweet Baby Ray's. ''It's a high-quality sauce, so making sauce from scratch seems silly,'' Dorsey says. ''It saves on labor, time, ingredient costs and equipment — we don't need to have a lot of smallwares around. Making our own sauce seems like a long run for a short slide.''

Miller agrees. ''There are many outstanding barbecue sauce brands on the market to choose from, so it makes sense to take advantage of the quality and consistency they bring,'' he says. ''Chefs can choose a pre-made sauce and add a unique ingredient to it, so to give it their own signature flair. In this day of labor shortages, it is great that small independent operators have many options to choose from.''

Suppliers don’t just stop at providing sauce either — many offer help with menu ideas as well. Sweet Baby Ray's, for example, has crafted a variety of barbecue-based comfort food recipes for its operators, including:

Whatever form it takes, and however it’s incorporated, sweet and spicy barbecue flavors continue to be a hit among customers seeking comfort food, so savvy restaurateurs everywhere should consider updating their menus accordingly.