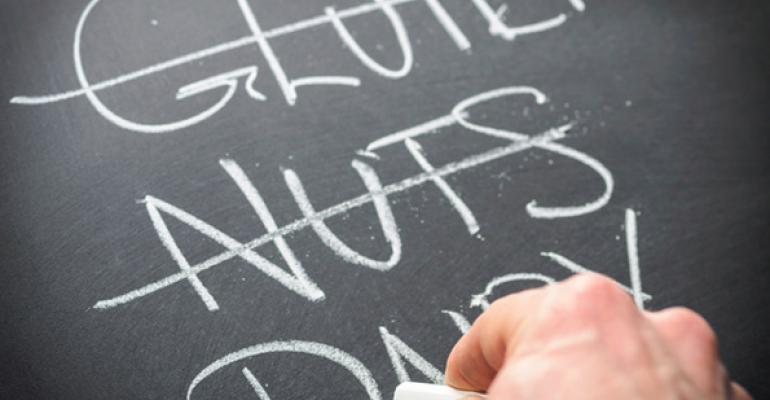 Many of you are old enough to remember the famous line: “It’s 10:00 o’clock. Do you know where your kids are?” I can’t believe that it’s 2015 and many (possibly most) of your staff don’t know where their allergies are. Based on what I’ve seen lately it’s time to review this ever-important topic.

Now, before you think that I am overacting, I want you to rest assured that I have heard all the stories about people claiming to have serious allergies who really didn’t understand what they were talking about. We’ve all heard about people who are allergic to gluten so they won’t order an apple/steak/olive to go with their doughnut. My favorite one is actually personal.

I was catering a 50th birthday party for a man. The party was thrown by his wife and sister, who told me it was critical to not use eggs in any dish. The guest of honor, Bob, was violently allergic to anything with eggs in it. Around 6:00 p.m. Bob came into the kitchen, said his sandwich was too dry, reached into the refrigerator and pulled out the jar of mayo and put a large glopping spoon on his sandwich. I watched in amazement, astonishment, and horror as he horked it down and walked back to the party. Three hours later when we left he was still fine.

Of course, many people have real allergies with real consequences. Have you adequately trained, retrained, and followed up with your servers and kitchen staff on this? Even if you have, I suggest you do a double check. All of the below happened to me in the last several weeks. Note: I have issues with milk, cream and non-aged cheese. We aren’t talking mild discomfort, we are talking major issues that more than once landed me in the hospital. Fortunately, I can handle a trace amount, but:

1. At a recent food demonstration I tasted a seafood cake. After tasting it I was asked what I thought and was told that a low-fat milk and flour roux were substituted in place of the eggs. I was shocked to hear that milk was in a crab cake.

2. I had brunch at a high-end restaurant. I ordered the eggs benedict. Four hours later I was in bad shape, eight hours later I was in the emergency room. When I called the restaurant a few days later I was told that they add heavy cream to their hollandaise to give it “the creaminess of the eggs and extra impact.” For some reason they didn’t want to pay my medical bills claiming that I should have asked if there was milk in the hollandaise.

3. Last night at dinner I ordered a pasta dish in a tomato sauce. I asked the server if it contained any dairy products. She looked at the menu with me and told me that it came in a tomato sauce. When it arrived at the table I looked at the sauce and knew—as a chef—that the color indicated milk or cream had been added. I sent her back to ask in the kitchen. She came back and said that the relief cook that evening thought that it was too boring with just tomato sauce and had added cream.

4. A friend of mine is allergic to eggs. He ordered a steak and mashed potatoes at the same time as the incident above. Halfway through his potatoes he found an eggshell in their midst. What it the world was it even doing there in the first place?

5. I swear I am not making the following up. I was out with a friend with a nut allergy. He told the server he was allergic to “tree nuts.” He ordered a salad and it came with pecans on top of the salad. He told her that she was informed that he had a tree nut allergy. Her reply: “That isn’t a tree nut, that’s a pecan.”

6. “Is there any milk or cream in the crab ravioli?” I asked. “No sir.” The ravioli came plated with a sauce. I called the server over and asked, “Is there milk or cream in the sauce?” She replied and said she didn’t know. I had to ask her to check. She came back and said, yes, there was. She seemed puzzled why I unhappily asked her to take the plate away.

7. At a recent reception at a major culinary institution there were multiple food stations. I went to one and noted that one of the instructors was serving. I asked her if there was any milk or cream in the item. “I don’t know, I didn’t make it,” she replied. “I’m just serving it.” My students know that everyone in every group must know all of the ingredients of all dishes. On Wednesdays I teach in the local jail and all of the inmates know the same thing. If people in jail who have never cooked or served a day in their life know this, why doesn’t your staff?

Before I close, do you and your staff know the ingredients in the convenience products you are using?

Sorry to scare you like this, but as owners, managers, kitchen managers, chefs and sous chefs, it is critical that we teach about allergies to everyone and that FOH and BOH work as a team. Killing someone is not going to be good for your bottom line.