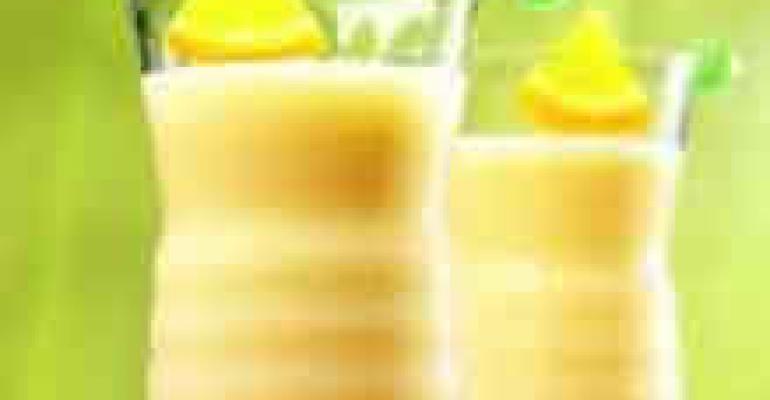 Shake Up Your Milk Sales

Summer may be over, but with some creativity, you can keep customers interested in delicious shakes, smoothies and other profitable milk-based drinks.

On the opposite coast, Scott Marcus, owner of the New York Milkshake Company, NYC, uses whole milk, but freezes it, so his 24-ounce concoctions stay cold until the last gulp. The other secret? Marcus says premium-quality ice cream and good syrups help perfectly bind the milk and ice cream. Although smoothies omit ice cream, high-quality ingredients, including fresh, cold milk or yogurt and in-season fruits are important.

Sky's the Limit!
Raise the excitement level for shakes and smoothies by offering new and unexpected varieties, including global flavors.

Variety is one of the secrets to milkshake success at Burgerville. Unexpected varieties include this fall's Pumpkin and Egg Nog flavors. At the New York Milk Shake Company, novelty keep customers coming back. With 14 ice cream varieties and a host of syrups, Marcus is able to offer such unexpected choices as Watermelon, Grape and Fruit Punch.

Of course, ethnic flavors are hot now, even when it comes to shakes and smoothies. At Louisville's Vietnam Kitchen, the parrot-green Avocado Milkshake is a standout. Along with fresh avocado, the shake contains fresh milk, sweetened condensed milk, and ice. Back at the New York Milkshake Company, the Green Tea Milkshake, made with green tea ice cream, frozen milk, and a shot of vanilla syrup is one of their best-sellers. Licuados are the specialty at Luna's Cafe and Juice Bar in Sacramento, Calif. These Latin-inspired smoothies deliver refreshing flavor with fresh milk (or orange juice), honey and a bit of lime, blended with the guest's choice of seasonal fresh fruit like melons, pears, mangos, and papayas.

Seasonal Specialties
Cold weather needn't put a chill on your shake and smoothie sales. "I sell milkshakes in the dead of winter," says New York Milkshake Company's Marcus. George Brown at Burgerville agrees: "They order them for their uniqueness, rather than for the refreshment," he says. Seasonal shakes and smoothies can help keep the momentum going.

Brown and his team are currently choosing the Holiday milkshake Burgerville will offer this December. Contenders are Caramel Apple, Peppermint Fudge, and White Chocolate-Cranberry varieties. His favorite, however, is a Cranberry-Orange milkshake flavored with fresh orange juice and cranberry sauce made by a local grower. After January, think Valentine's Day. The Denver-based Red Robin chain gave its February shake sales a shot in the arm last winter with the Chocolate-Cherry Milkshake.

Delicious Indulgences
Taking the nutritional value up a notch can also steer customers to milk-based drinks. However, the classic shakes like chocolate, strawberry, peach, banana and vanilla are still top sellers. "Chocolate is king," when it comes to shakes, says Red Robin's executive chef Luke Belsito, and for many guests, the richer the better. One of his best-sellers is the Cookie Magic, a simple blend of ice cream, milk, chocolate syrup and Oreo cookie chunks.

Burgerville's Brown says adding something to chew on always takes the satisfaction level up a notch. One of its top sellers, the Chocolate Hazelnut milkshake, features satisfying chunks of roasted hazelnuts.

So pull up a blender! Create shakes and smoothies to bring cool profits all year long.