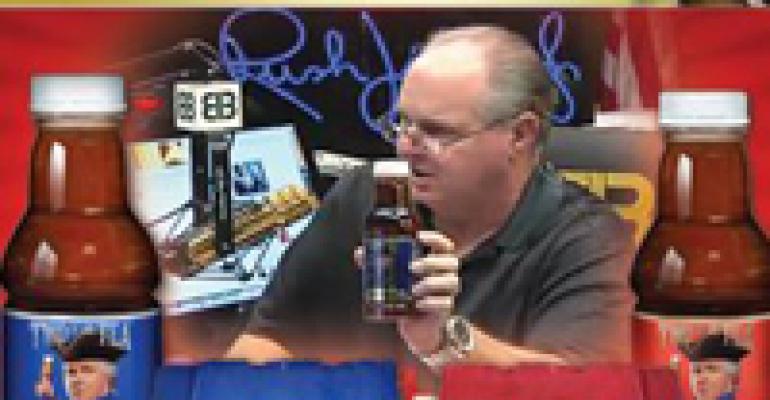 Never made any money off of Red Bull? Miss out on the Four Loko craze? Maybe your restaurant should stock one of two new libations backed by celebrities who bring a built-in following: Rush Limbaugh’s Two If By Tea and Snoop Dogg’s Blast by Colt 45. No mixologist required.

Even the experts can’t predict when or if a new beverage will catch on with a particular demographic. So it’s often worthwhile for restaurants to stock some new ones, if only to add some novelty value to their offerings. And you can’t beat these new products from Limbaugh and Snoop Dogg for novelty, because they appeal to opposite ends of the political and demographic spectrum.

Granted, Limbaugh’s pull isn’t as great as it was in the early 1990s. That’s when he first made his mark as a conservative radio voice. We’ll bet at least a few RH enewsletter readers can remember the “Rush Room” craze, when Limbaugh followers would gather in restaurants for lunch while his midday radio show played over the sound system.

It seems pretty old school now, especially since Limbaugh’s conservative media dominance has since been eclipsed by Fox News. But Limbaugh helped a lot of restaurants make money in his day, so perhaps his bottled tea venture, meant to appeal to supporters of the Tea Party movement, could help you tap into his fan base once again. Researchers at the Gallup Poll estimate the size of the Tea Party—including active members and those who say they support its ideals—at 28 percent of all Americans. That’s a lot of tea drinkers.

As for Snoop Dogg, his rap career is still going strong, but he’s become even more famous for being able to remain in permanent party mode no matter the circumstances. His legion of fans hope to get their party on, too, and they’ll definitely be able to once they start drinking Blast.

The product is a malt liquor beverage that’s sold in 23-oz. cans. It’s fruit-flavored, available in flavor combinations that include strawberry lemonade and raspberry watermelon. Blast is part of the Pabst Brewing Company’s Colt 45 line and contains 12 percent alcohol. So consuming a single can is the equivalent of drinking five 12-oz. regular-strength beers. One can is enough to push the blood alcohol content for many people over the 0.8 legal limit.

So you know many younger patrons will be eager to give it a try…presuming the actions of 17 state attorneys general don’t prevail. They’ve asked Pabst to consider reducing the alcoholic content, labeling Blast as a “binge in a can,” or withdrawing it from the market entirely. Stay tuned.

We don’t know if either of these products would be right for your particular customer base. Each has its drawbacks. Two If By Tea seems expensive, costing $23.76 per 12-pack at retail. For now, consumers can only buy it online. Blast is easier to get (it moves through the usual beverage distribution channels) but you’re probably going to need to schedule an extra bouncer or two if you start to sell a lot of it at your place.

Either way, we think one or both of these products will get your customers talking and will add some life to your beverage program

How will you market them to your customers? Blast doesn’t need a lot of verbiage to get its position across. Its simple three-word promise: “Works Every Time.” This phrase paints a vivid picture for its intended audience.

Limbaugh went the other way, posting a lengthy manifesto about his tea product online after reading it on his radio show while introducing the product. It begins this way:

You can find the rest of this spiel on the product’s website, http://TwoIfByTea.com. An additional benefit for Tea Party enthusiasts is that “A portion of every bottle sold goes to our wonderful friends at the Marine Corps-Law Enforcement Foundation. Now, these people are the ones that dole out college scholarships to families of Marines killed in action.”

Give Limbaugh credit. Two bucks a bottle for iced tea, with the extra spin of a donation to the Marines built into the deal. The man knows his market. So does Snoop Dogg. That’s why we think one of their new beverage products might be able to make some money for you.