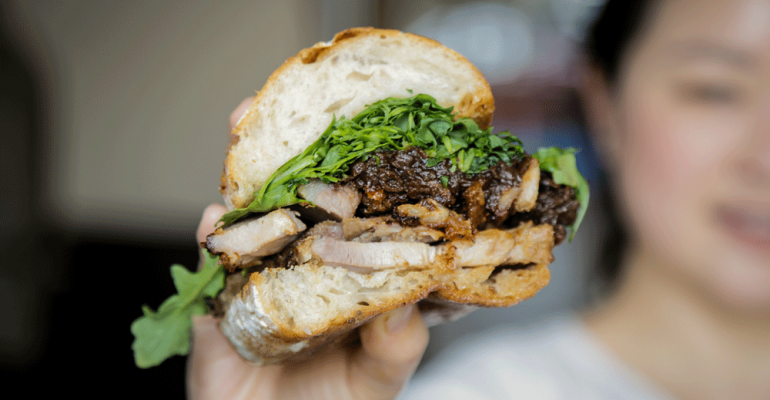 What makes it special: The Roli Roti food truck was founded in 2002 by Thomas Odermatt, a third-generation butcher from Switzerland who moved to the San Francisco Bay Area. His family still operates a butcher shop outside Zurich.

Missing the rotisserie meats of home, Odermatt used his family recipe and butchering techniques to make his porchetta, which is cooked on a rotisserie so the meat stays juicy and moist while allowing the pork belly and skin to crisp up and make cracklings. The porchetta is sliced piping hot, so the sandwich is layered with tenderloin and pork belly with the crackings, and the bread sops up the juices. The marmalade adds sweetness and the arugula cuts the fattiness of the meat. The house-made rosemary sea salt adds a touch of herbaceousness.

Served on Thursdays and Saturdays at the San Francisco Ferry Building farmer’s market, this sandwich has quite a following. This month, the sandwich is scheduled to be featured on the Food Network’s “Carnivorous,” with a taping scheduled in August for the Travel Channel’s “Man Versus Food.”

See all of the 2019 Best Sandwiches in America here >>