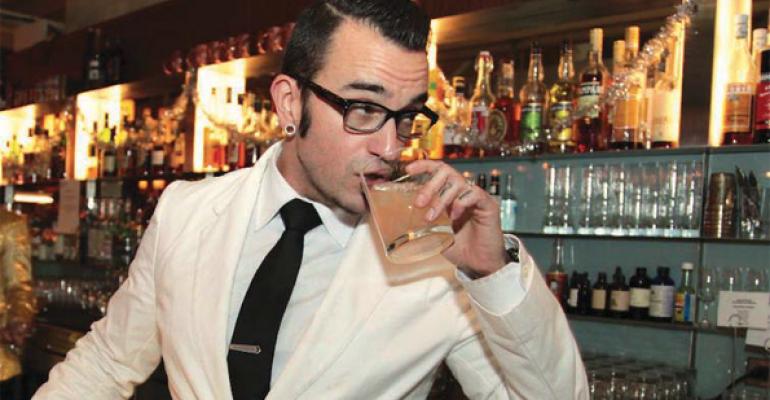 Sean Kenyon: Born to be a bar man

Just about all young boys grow up dreaming of becoming an astronaut or a big league baseball pitcher, but Sean Kenyon dreamed of becoming a bartender. Upon hearing such a thing, most parents would rush their kid off to a psychologist for an attitude adjustment. Not Sean’s. His family has owned pubs in New Jersey since the 1930s, so Kenyon was destined to see his dream come true. As for the would-be astronauts and pitchers, well, they’re now selling insurance or working at Home Depot.

No need to get melancholy about the vagaries of fate because we all need insurance, hardware and a good drink. The latter is a sure thing with Kenyon, who cut his teeth behind the bar at age 16 and never looked back. He’s no astronaut or big league pitcher, but this guy’s drinks can make you soar or back you off the plate. He’s far more than a shot and beer guy.

Kenyon plies his trade at Williams & Graham, which is a speakeasy at the back of a bookstore in Denver. Despite W & G only being open since 2011, Esquire named it to its list of the Best Bars in America, while Food & Wine declared it one of the Top 10 Best New Bars in the U.S. Late last year, W & G was also a Tales of the Cocktail finalist for Best American Bar, while Kenyon was nominated for Best American Bartender.

The co-owner of W & G, Kenyon has a fondness for classic cocktails and a deep respect for their history. He’s all about attention to detail and putting the customer first. He bristles at new-age bartenders who wear suspenders, curled mustaches and newsboy caps. Bartending, he says, is about taking care of people and not about fashion. Any bartender caught wearing a hat behind Kenyon’s bar has to buy a round for the house.

As serious as he is about his craft, W & G is a fun place with a lively attitude. Even the names of cocktails suggest whimsy, including Purple Drank (Ocho Reposado Tequila, fresh lime juice, agave syrup, allspice dram and spice wine), Somewhere in California (Method Roasters Cold Toddy, Pierre Ferrand Druy Curacao and Leopold Bros. Absinthe) and the Charles Bronson (Rittenhouse Rye, Strega and Amaro Montenegro).

Kenyon looks far too young to have been in the business for 27 years, but when you belly up to the bar, you don’t want some crusty, old dog barking at you and you certainly don’t want a hipster who’s more interested in his or her tattoos than in making you a proper drink. What you want is someone like Sean Kenyon. Salud!