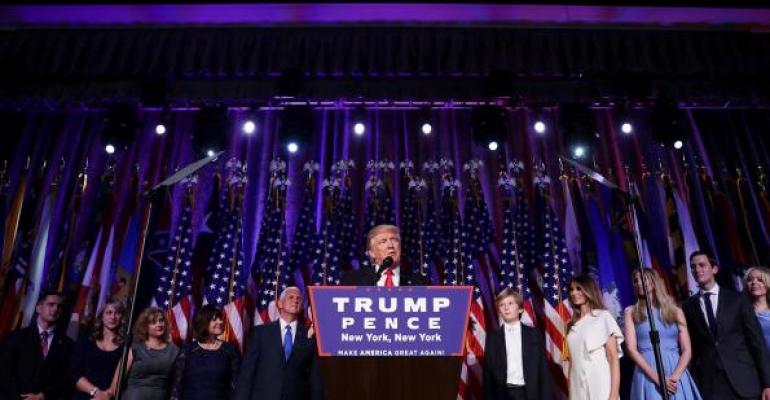 <p><em><img alt="" src="/site-files/nrn.com/files/uploads/Election%202016_thumb.png" style="width: 125px; height: 100px; float: left; margin: 2px;" />This special Election Day recap was written by the Align Public Strategies team, a full-service public affairs and creative firm that helps corporate brands, governments and nonprofits navigate the outside world and inform their internal decision-making.&nbsp; Align&rsquo;s managing partner Joe Kefauver is a regular columnist for Nation&rsquo;s Restaurant News. This article does not necessarily reflect the opinions of the editors or management of Restaurant Hospitality. Read the full report <a href="/site-files/nrn.com/files/uploads/Align_2016_Election_Day_Recap_NRN.pdf">here</a>.</em></p>

A big chunk of American citizens and corporate leaders are going to wake up this morning, tomorrow and the next day with more questions than answers on the heels of Trump’s shocking win. Nowhere are there more questions about the future than on Wall Street. The simple fact is that markets hate uncertainty — and many investors believe Donald Trump's unpredictable nature and anti-trade stance could bring lots of global uncertainty in both the short and long-term future.

Make no mistake about it, Trump’s victory was a vote against Washington, against politics as usual and against the “system.” It was not only a rebuke of the last eight years under President Obama, but also of Mitt Romney, John McCain and George W. Bush.

It’s worth pointing out that campaigning and governance are very different, as is running a business in the private sector and managing a sprawling bureaucracy. One of the primary jobs of the president and his cabinet secretaries is managing the federal government, broken into agencies. We can safely assume an immediate reversal of the posture of all agencies from the Department of Labor to the Environmental Protection Agency. The National Labor Relations Board will continue operating as currently constituted until the president can seat a new appointee to the board in 2018. There will be no love lost between President Trump and bureaucrats at the Internal Revenue System, the Department of Labor and the Securities Exchange Commission. A full-scale dismantling of federal agencies and subsequent war with public sector unions is not out of the realm of possibility.

TRUMP ON THE ISSUES
Trump won with a campaign that avoided revealing policy details for the majority of key issues that will affect P&Ls. That creates a significant problem for business planning. Here are the general conclusions we can make about Trump’s positions:

• Minimum Wage
Trump has taken multiple positions on minimum wage over the course of the campaign. Ultimately, he settled on a $10 an hour federal minimum wage, allowing states to pursue higher rates. It’s unlikely that this issue will be a priority in a Trump administration.

• Overtime Regulations
When questioned on the new overtime regulations, Trump stated that he would like to see “a delay or carve out” for small businesses. He has not put forward a specific position other than that. If the courts do not prevent the overtime regulations from going into effect on Dec. 1, then a Trump administration will be faced with the dilemma of rolling back the regulation after employees have grown accustomed to the new threshold.

• Pay Equity
Trump has not committed to a position on this issue. His daughter, Ivanka, floored conservatives during the Republican National Convention by saying her father “will change the labor laws” and support equal pay and paid family leave. Trump’s lack of a stated position and previous comments like “You’re gonna make the same if you do as good a job,” show a lack of commitment to changing labor laws. If there is any labor-related issue he actually takes an interest in as president, it may be this one. The Trump administration will have to decide whether or not to roll back the U.S. Equal Employment Opportunity Commission’s new pay disclosure requirements.

• Paid Leave
Trump has not taken a meaningful position on paid sick leave; however, Trump’s parental leave proposal is one of the most detailed employment policy proposals released to date and would include six weeks of paid leave and an earned income tax credit for dependent care. Conservative groups derided the plan.

• Health Care
Trump says he will ask Congress to immediately repeal Obamacare on the first day of his administration. He plans to work with lawmakers to replace it and “implement reforms that follow free market principles.” His only definitive proposal on health care to date is allowing people to buy insurance across state lines — which isn’t a new policy discussion but would be a significant change to the insurance market. It's widely expected that Trump would hand off the health policy portfolio to House Speaker Paul Ryan.

• Taxes
Trump has proposed large tax cuts across the board coupled with proposals to reduce spending. The Trump tax plan is dependent on economic growth expanding the tax rolls. Congress, regardless of party control, rarely reduces spending, and many economists are predicting a significant increase in the deficit.

• Trade
This is the second easiest issue to predict for Trump because he has never wavered from the populist viewpoint. “Free trade” is practically blasphemy to him and his base, at least as a candidate. Trump slams NAFTA and the Trans-Pacific Partnership deal. He pledges to rip up old deals and introduce tough trade measures, especially against China.

• Immigration
Employers dependent on migrant labor and visa workers should be concerned with Trump’s punitive approach to immigration. Trump will feel pressure to show immediate progress on this issue and some employers may end up in his administration’s crosshairs. Others may face worker shortages.

BALLOT INITIATIVES
Since Congress has not taken up minimum wage at the federal level (and is unlikely to), ballot initiatives at the state and city level will continue to be the norm. Each minimum wage initiative that appeared on the 2016 ballot (four states and one California city) passed. Of particular importance, while raising their state minimum wage, Maine voters also eliminated the tip credit, giving momentum to national efforts on this issue. Despite many of their candidates losing, the labor community overall had a good night with regard to ballot initiatives, winning on minimum wage and defeating right to work measures.

Also of note, two cities, Youngstown, Ohio, and San Jose, N.M., passed scheduling mandates. Scheduling has become a favorite issue for labor activists and this issue will appear on future ballots. The Youngstown mandate will likely be challenged in court on preemption grounds.

Employers may find themselves in the unusual position of facing few immediate threats out of D.C. However, an overall environment of economic uncertainty, which could tighten credit markets and shake consumer confidence and spending, could negatively impact bottom lines.

The biggest, most important take-away for entry-level employers following Election Day results is the reality that with Washington D.C. closed to the labor community, we can expect a surge in activism at the state and particularly local level. Now, with no allies at the Labor Department, the only level of government available to activists will be dark blue urban centers. Even though voters reaffirmed Republican majorities in D.C. and at the state level, they continue to take a schizophrenic approach to employment policies, approving minimum wage and paid leave proposals. Employers would be wise to recognize this reality and acknowledge we still have a lot of work to do.