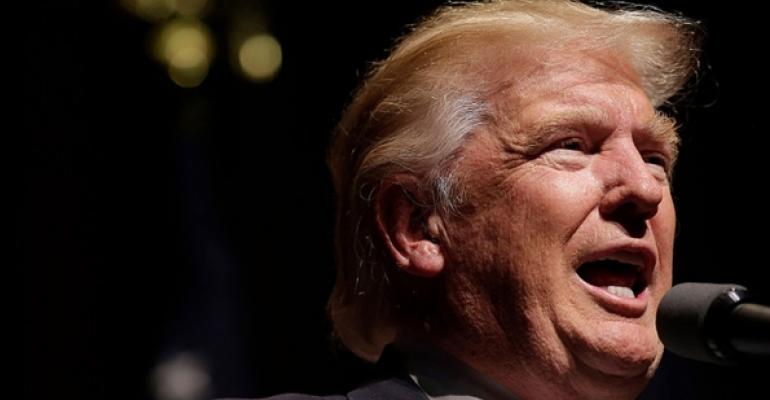 Uncertainty looms in wages and regulations at end of close race

Along with Trump’s election as the 45th president of the United States, which gave restaurant executives hope for the easing of regulations and executive orders, voters approved new minimum-wage increases in Arizona, Colorado, Maine and Washington.

Robert Cresanti, president and CEO of the International Franchise Association, called the election “historic,” but said that now “the real work begins.”

“The American middle class, upward mobility and opportunity have suffered from the years of political gridlock and business as usual,” Cresanti said. “This election marks a sea change in how the American people expect their elected officials to conduct themselves. We have to find the third way — not the Republican way, not the Democrat way, but the American way.”

Cresanti said voters rejected candidates who intended to govern “by regulatory fiat or impose policies that would destroy jobs and crush small businesses.”

Dawn Sweeney, president and CEO of the National Restaurant Association, said the group congratulated Trump and looked forward to working with him “to protect and expand the contributions restaurants make” to communities.

“We are committed to working with both sides of the aisle to find solutions that grow our economy and help all Americans succeed in the workforce,” Sweeney said

The results were “a confirmation of free enterprise and a rejection of ever-expanding government, a belief that we can and should do better for our nation and our children,” he added.

The winners were “America's working and middle class,” Puzder said. “Now we need to come together. As President-elect Trump said: ‘To be historic, we have to do a good job.’”

The theme of unity was echoed elsewhere. Howard Schultz, Starbucks chairman and CEO, issued an open letter to employees saying that he was “stunned” by the results.

“We cannot know what the precise impact will be on our country and the rest of the world,” Schultz said. “I am hopeful that we will overcome the vitriol and division of this unprecedented election season.”

Schultz said Americans should honor the democratic process and give Trump the opportunity to govern.

“We can choose to answer the challenges of the day with kindness and compassion,” he said. “We can choose to listen, to understand and to act with respect. We can choose to live by the values that reside in each of us, and honor our commitment to nurture the human spirit with love, and offer everyone in our stores and communities a place of inclusion and optimism.”

Schultz added that “together is where our collective power lies,” a sentiment shared by Art Smith, chef of Blue Door Farm in Chicago and Southern Art in Atlanta.

“Congratulations President Elect Mr. Trump. We can build a better America together as one people,” Smith said in a tweet.

@realDonaldTrump Congratulations President Elect Mr.Trump we can build a better America together as one people.

Even José Andrés, the Spanish-born chef who had a verbal dust-up with Trump over his immigration statements and pulled out of a planned restaurant in the President-elect’s new Washington, D.C., hotel, offered words of support in a tweet directed at Trump.

@realDonaldTrump I pray that your words, wisdom and actions from now on, will be the ones of the leader that America truly deserves.congrats

Stephen Anderson, an analyst with the Maxim Group, issued a report Wednesday morning that said the largest impact would be on such brands as Chipotle Mexican Grill, Jack in the Box and Red Robin Gourmet Burgers because of their exposure in those states.

“With last night's results, Maine joins seven other ‘One Fair Wage’ states — including California and the entire West Coast — all of which have seen their restaurant industries flourish since eliminating the subminimum wage. Maine and Flagstaff are this movement's latest victories, but they certainly will not be the last,” said Saru Jayaraman, ROC United co-founder and co-director, in a statement.

Anderson of Maxim said it was unlikely, with Republicans holding majorities in both the House of Representatives and the Senate, that a federal minimum wage above the current $7.25 an hour would be enacted.

“Although President-elect Trump pushed for a $10 per hour minimum wage early in his campaign, he now appears to favor leaving this issue to the states,” Anderson noted.

“We believe the prospects for an increase in the federal minimum wage are limited,” Anderson said. “We also do not rule out potential relief on healthcare and overtime labor costs for restaurant companies.”

Trump and Republican leaders have vowed to repeal the Affordable Care Act, or Obamacare, in favor of a currently undefined alternative.

“We believe it is too early to measure the potential cost savings of a potential replacement for the Affordable Care Act, but we estimate the labor cost margin impact from the implementation of the act in the past couple of years at roughly 30 basis points to 50 basis point,” he said.

Anderson also said President Barack Obama’s executive order on overtime for exempt employees, set to go into effect in December, might be revisited in the Trump administration. Those regulations call for the exempt employee threshold for overtime pay to be increased to $47,476 a year, from the current $23,660 a year.

“Assuming an easing of overtime regulations, we estimate restaurant operators could see a labor cost margin benefit of about 20 basis points to 30 basis points, depending on the operator,” Anderson said.

Beyond the economic implications of the election, some foodservice leaders were generally sanguine about Trump’s election, such as chef and cookbook author Graham Elliot.

Regardless of who's president, this country has endured and thrived for 240 years. Our best days are ahead of us if we all stay together.

This week's top 10: A disaster expert on preparing for a second wave, the restaurant players who got PPP loans, Chef Kwame Onwuachi leaves Kith/Kin
Jul 09, 2020