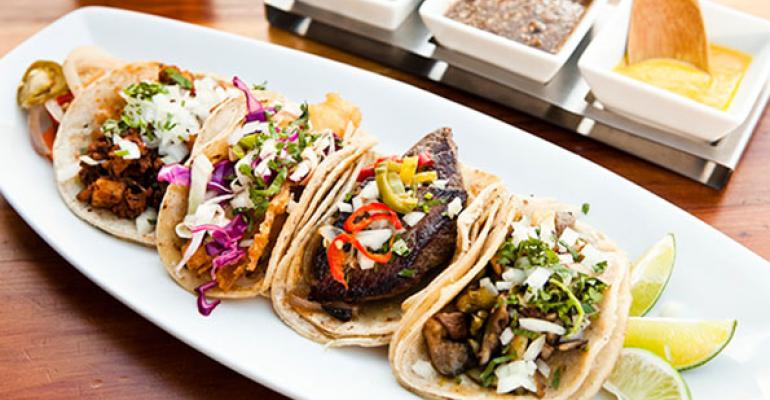 <p>the Mexican segment is dominated by independent operators like Tacolicious, a small group based in San Francisco.</p>
Trends

Restaurants that offer Mexican food are staples within the U.S. foodservice landscape. From large chains to small mom-and-pop operations, there is consistent demand for this flavorful cuisine. With contributing factors like diet, taste preference, affordability and location, data shows that Mexican food continues to be a popular menu type among a wide variety of diners.

While prominent chains like Chipotle, Qdoba, and Taco Bell maintain their place in the media with hip add-ons like tofu, innovative breakfast meals and efforts to use fresh local ingredients, it’s the smaller independent Mexican restaurants that are using this market to their advantage.

The most recent data shows that intimate one-offs outnumber dominant chains by three to one. According to CHD FIND there are approximately 57,000 Mexican restaurants in the U.S., of which approximately 15,000 are classified as chain restaurants. To be considered a chain, a restaurant must have 10 or more units in operation. While you may be more aware of your local Taco Bell and the rising popularity of Chipotle, there’s a greater chance that the smaller, authentic restaurants nearby are part of the 62 percent of all Mexican restaurants that have been in business for at least five years or more. Given how rapidly restaurants go in and out of business, this is a number everyone likes to hear.

As the third most popular menu type, Mexican accounts for eight percent of all restaurants in the U.S. Considering that the catchall Varied menu type remains at the top of the list as the single most popular menu type in the U.S., the only specific category larger than Mexican food is pizzerias. Some 10 percent of U.S. restaurants specialize in pizza, just two percent greater than those that serve Mexican food.

Mexican restaurants naturally have a stronger presence in Southwestern states. Texas tops the list for states with the largest share of Mexican restaurants at 17 percent. California and New Mexico follow with 14 percent each. Arizona and Colorado come in with 13 percent and 12 percent, respectively.

Which ones? Places like Border Grill, started by the dynamic duo Mary Sue Milliken and Susan Feniger, who have taken a simple Mexican-style menu and surpassed the typical marks of success within this menu type. Their Mandalay Bay location in Las Vegas is part of the elite group of restaurants pulling in more than $5 million annually. It’s further proof that there is something to be said for a fairly simple menu with truly authentic flavors.

Other notable independents on the list of top-grossing independent Mexican restaurants are the creative menu type Topolobampo in Chicago, the classic L.A. joint El Cholo, Las Delicias in Denver and El Pinto Restaurant in Albuquerque. These restaurants boast a unique atmosphere, well-known chefs and a focus on recreating classic meals with the same recipes and techniques that natives have followed for generations before them.

While these restaurants are more upscale than many of their Mexican counterparts, they still remain more casual than the average steak or seafood restaurant. Data shows that 12 percent of all casual dining in the U.S. is Mexican and 20 percent of all fast-casual restaurants in America have a Mexican menu type.

So why do small independents continue to do so well in the Mexican segment? It’s because consumers want authentic flavor their way—at any price point—with a family-friendly environment. That’s exactly what independent Mexican restaurants give them.