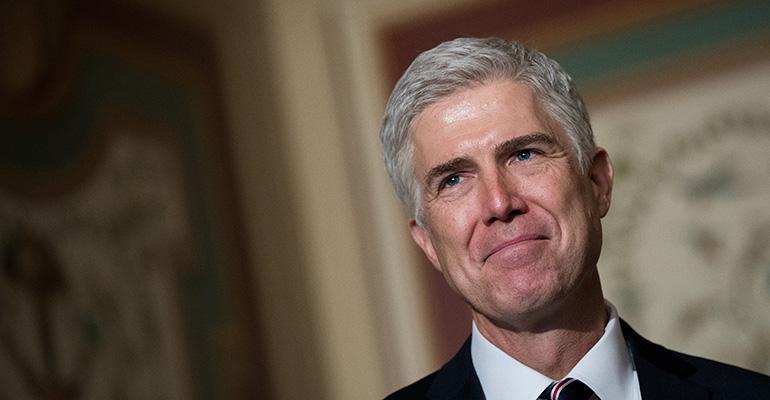 Drew Angerer/Getty Images
Supreme Court nominee Neil Gorsuch looks on as Senate Judiciary chairman Sen. Chuck Grassley speaks to reporters before their meeting on Capitol Hill in Washington, DC. President Donald Trump has nominated Judge Gorsuch to the Supreme Court to fill the seat that had left vacant with the death of Associate Justice Antonin Scalia in February 2016.
Trends

If approved, Gorsuch, who has served on the U.S. Court of Appeals for the 10th Circuit since 2006, would replace Justice Antonin Scalia, who died in February 2016.

The nomination was applauded by the National Restaurant Association, which recently asked the Supreme Court to hear a challenge to existing laws that prevent cooks and dishwashers from sharing in tip pools.

Angelo Amador, executive director of the NRA’s Restaurant Law Center, described Gorsuch as “an experienced and knowledgeable judge who had extensive bipartisan support when he was confirmed to the 10th Circuit unanimously. We look forward to again having a full bench in the U.S. Supreme Court to decide cases of critical importance to our industry and the economy in general.”

Hospitality attorneys see the choice of Gorsuch, if confirmed by the Senate, as generally positive for employers.

In a report Wednesday, attorneys at law firm Fisher Phillips wrote that Gorsuch has a general reputation for siding with employers, but not always on gender-related claims, and he has upheld the rights of employees in various retaliation lawsuits.

On National Labor Relations Board issues, Gorsuch has upheld decisions aiding both unions and employers in various cases, so it’s difficult to gauge any anti-employer or anti-union animus, the report said.

But Gorsuch is seen as hostile toward burdensome government regulations.

“Employers can feel confident that he will more often than not side with them when it comes to workplace issues that land at the Supreme Court,” the report said.

However, Fisher Phillips noted that Gorsuch’s approval may not sail through the Senate.

Senate Democrats appear ready to use the nomination as a staging ground to express opposition to Trump, the report said, with many still upset about the Republican-led block of President Barack Obama’s nominee, Judge Merrick Garland.

Senate filibuster rules would require 60 votes in order to confirm a nominee to the Supreme Court, which would mean Gorsuch would need to win at least eight votes from Democrats or Independents to be approved, assuming Republic lawmaker vote unanimously to support Trump’s choice. Republicans, however, could invoke the “nuclear option” by suspending procedure to permit a simple majority vote.

Confirmation hearings are expected in late March or early April.