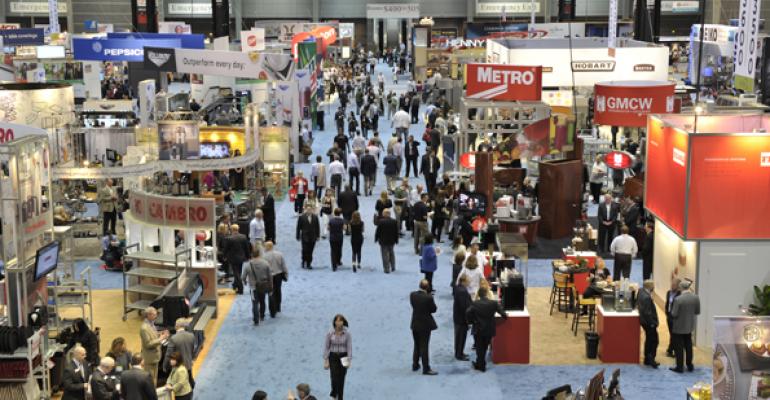 If the 94th annual National Restaurant Association Restaurant, Hotel-Motel Show was any indication, the restaurant industry is doing pretty well. There were 62,500 registrants, from all 50 states and more than 100 countries, and exhibitors filled 579,000 square feet of space at McCormick Place in Chicago over four days in May.

Attendance was up for a second straight year, and more than 2,100 exhibitors led to a 6.8-percent increase in floor space and the opening of a third exhibit hall. Somewhere in all that chaos and activity were several new features like the Alternative BiteStyle specialty pavilion for people with special dietary needs, free health care consultations from industry leaders at the Health Care Knowledge Center, the action-packed iSculpture competition and a fully functioning hydroponic garden. There was also the show within the show, the sixth annual International Wine, Spirits & Beer Event that took place over the middle two days of the NRA Show.

Away from the trade show and inside the meeting rooms were robust discussions and educational insight into subjects like sustainability, health care, technology, social media, franchising and more.

There were awards, parties and receptions and probably almost as much action away from McCormick Place as within. The 2013 Operator Innovations Award winners were crowned: Ninety Nine Restaurants for Food Safety; United States Air Force for Health & Nutrition; HMSHost for Menu Development; Kennesaw State University for Sustainability; and Walt Disney Parks and Resorts for Technology. Steve Schneider, principal bartender at New York’s Employees Only, won the IWSB 2013 Star of the Bar mixology contest and a $5,000 prize.

“NRA Show 2013 and IWSB reminded us of the fun and excitement found in the restaurant and foodservice industry,” said Jeffrey Davis, the convention chair and c.e.o. of the U.S. Beef Corporation. “From serendipitous business encounters to educational discoveries and networking opportunities, no other event provides this kind of access to the ‘who’s who’ of industry leaders, celebrities, brands, products and services. In just four days, industry attendees and operators received a year’s worth of key learnings and industry insights to not only build their business, but also provide solutions to their everyday challenges.”

Here  is a complete list of our coverage from the show, with highlights from each:

18 things we learned from Anthony Bourdain: “I get to go anywhere in the world with my friends and tell a story about it. I get to get drunk, I get to curse and I get paid for it,” he said.

Schultz inspires with story of Starbucks' rise, fall and revival: “We made the mistake in ’07 and ’08 of talking about millions of customers and thousands of stores,” said Howard Schultz, Starbucks’ c.e.o. “That’s ridiculous. The moment of truth for Starbucks, and for all of you, is one customer, one Starbucks partner wearing that green apron, and that one experience based on the best-tasting coffee on the planet.”

Ready to live in the cloud?: Reduced costs and less on-site staff were the biggest pros to jumping into the cloud, but fear of change and adapting to new procedures were two of the cons cited by panelists during an educational session on the topic.

Experts offer tips on starting sustainability programs: Chef Rick Bayless was creating sustainable restaurants and food programs before the word was even being used. He and other panelists discussed how a restaurant could add value by telling a story of sustainability.

Pours, presentation key with craft beers: Experts discussed the growing trend and how restaurants could capitalize on it to drive more revenue.