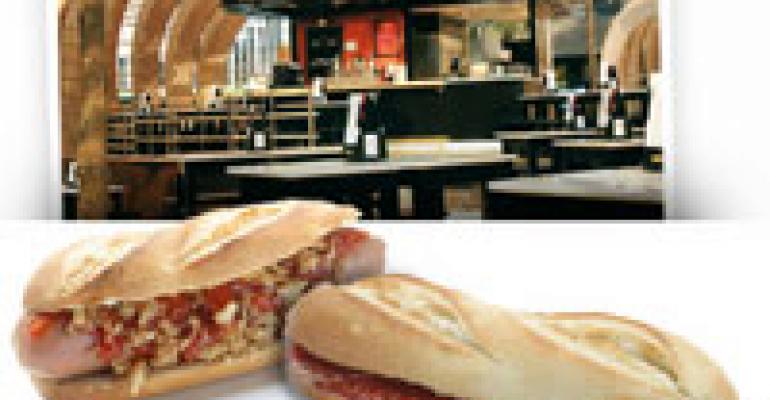 It sounds like a genius idea: Open a restaurant that stuffs high-quality Spanish tapas ingredients—100 different combinations—into baked-to-order rolls to produce slider-sized sandwiches, then sell them for as little as $1 apiece. Throw in cheap-but-good imported beer and wine and we could be looking at a fast casual growth concept waiting to happen.

If you’re wondering what the next big thing in the restaurant world might be, you’d better take a look at 100 Montaditos.

You’ll have to head to Miami do it. That where the chain’s two U.S. location can be found. Two more stores are scheduled to open there before the end of the year, as well.

There should be plenty to see when you get there. Bloomberg Businessweek reports the twp open 100 Montaditos stores have been doing $140,000 each per month since opening earlier this year. That’s less than the $213,000 average monthly take at the 200 or so units open in the concept’s home country, Spain. But it’s a solid first-year revenue stream for an unknown foreign brand making its U.S. debut.
It may not be unknown for long. Parent company Restalia Grupo de Eurorestauracion has big plans for the U.S. market. It hopes to have the 100 Montaditos store count reach 4,000 in five years. It thinks going the franchise route will enable it to reach that goal. It might make it but, hey, even Starbucks didn’t expand at this rate.

It’s an ambitious target, but almost everything about 100 Montaditos is ambitious. In an era where the fast casual mantra is to simplify operations by making just a few things very well, 100 Montaditos is going the other way. It offers guests a combination of quality and choice previously unseen at these price points. It’s to the company’s credit that it provides fast service despite the operational complexity the concept entails.

100 Montaditos indeed offers 100 sandwich choices. The list starts with sandwich No. 1, Serrano ham and olive oil, just one of 10 sandwiches that sell for a measly $1. There are 20 choices at the $1.50 price point, ranging from tuna with alioli (that’s the Catalan spelling of “aioli”) through grilled chicken with Iberic cheese and piquillo pepper to a dessert-like cream cheese and guava combination. Two-dollar options, 30 in all, include pulled bbq pork with blue cheese, bacon, tomato and alioli; and shrimp with guacamole. The list here includes a couple of options featuring anchovies, perhaps a tough sell in the U.S. market.

Moving up the price scale, there are 14 choices at $2.50 (the Serranito, Serrano ham, pulled pork, Iberic cheese tomato and olive oil); seven more at the same price but served on whole wheat bread (goat cheese with sundried tomato and pesto sauce) and 14 sandwiches that go for $3 (No. 100 on the menu features duck mousse with minced olives, tortilla Espanola, chorizo and mojo picon).

To accommodate less ambitious palates, the Miami stores even offer four U.S.-specific items—two burgers and two hot dogs, both served on the same baked-to-order five-inch rolls as the rest of the offerings. These items go for $2 apiece.

The beverage lineup is a real eye-catcher, too, and appears to be a key profit center. The least-expensive option is a range of fountain drinks for $2, the same price coffee and coffee drinks fetch. Bottled drinks are $2.50 and bottled beer is $3. Customers willing to spend $3.50 can choose from a 17-oz. mug of Spanish beer Mahou 5 Estrellas, a four-ounce glass of red or white Spanish wine, or two specialty drinks: Clara, draft beer blended with Sierra Mist, or Tinto De Verano, a 17-oz. combination of red wine and Sierra Mist similar to sangria.
Patrons can also order a bucket of Mahou beer—five bottles—for $12. On Fridays, there’s an all-day two-for one offer on buckets. Ten imported beers for $12 seems like a surefire way to draw a hard-partying crowd. The chain’s Wednesday “Dollarmania” deal is every sandwich for just $1. It’s another crowd pleaser, especially since 100 Montaditos has nixed takeout on this deal after huge orders backed up service.

There are plenty of pluses to this concept. It appeals to multiple demographics, ranging from foodies to frat boys, and should do well during both the lunch and dinner dayparts. And it should absolutely kill with the late-night bar crowd, since it’s open until 1 a.m. on the weekends. We’re not saying it’s a can’t-miss concept—let’s see how it does in a different part of the country, for one thing—but if you’re shopping for a franchise, this is one that’s definitely worth a look.