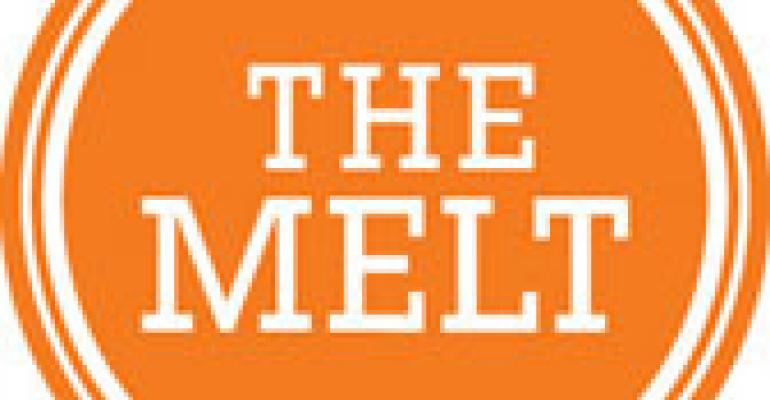 We all hope to make money fast in the restaurant game, but leave it to go-go tech investors-turned-operators to show us how it might actually be done. We’re not saying you should emulate their particular concept—The Melt, a fast casual grilled cheese chain. But their business plan is worth exploring, especially the big payout that comes at the end.

Remember Meltworks? It was the fast casual grilled cheese concept bounced from NBC’s “America’s Next Great Restaurant” halfway through the series because judges like Bobby Flay and Chipotle’s Steve Ells thought its appeal and menu were too narrow. They felt such a concept couldn’t scale up and go national.

Jonathan Kaplan thinks one can and he’s brought “James Beard award-winning restaurant designers, retail leasing experts, operational process and kitchen workflow engineers and the culinary talents of a visionary Michelin Star-awarded culinary team” on board to make sure that it does.

Kaplan’s business plan is straightforward. Have five units of The Melt open in the San Francisco area by the end of 2011, and build it out to 500 or more locations across the country by 2015. Five years in, sell the whole deal off to private equity buyers or go public. Either way, the original investors will be rolling in dough.

It seems like a naive view of how the restaurant industry actually works, but this is the way business is done all the time in the technology world. You dream up a new app, service or digital device; get money from some deep-pocketed venture capitalists; use it to hire a bunch of super-smart tech whizzes to develop the product, giving them a small slice of the company so they’ll stick around; make a splash in the marketplace; and, finally, sell out. This scenario happens perhaps several times each month, with most startups cashing out in less time than the five-year plan The Melt envisions here.

In fact, that’s how Kaplan made his money. He was the founder of the Flip digital video camera, selling the company that owned it, Pure Digital, to tech giant Cisco for $590 million. Cisco, which had no experience in consumer electronics before buying the Flip, shut down production of the Flip earlier this year, choosing not to sell it to another company.

Now Kaplan is taking this tech world business model into the restaurant world. He describes the concept this way:

The place should serve a decent sandwich. In addition to the upscale ingredients, Beard Award winner and Michelin-star holder Michael Mina is overseeing the food. He has a seat on the company’s board of directors and, we presume, a piece of the action if the concept succeeds as planned.

But exactly what kind of “innovative cooking technology” is required to produce a simple grilled cheese sandwich? The Melt’s backers say they have developed specialized cooking equipment that can produce a sandwich in just one minute, while its soup will be aerated prior to service to produce “combinations of flavors and textures that until now have been reserved for traditional fine dining experiences.”

Their thinking is that the one-minute turnaround time is necessary because many customers will place remote orders from their computer or mobile phone, then come into a unit to pick it up. “When a customer places an order, they will receive a QR code that can be scanned at any restaurant location,” The Melt people say. “This enables customers to pay through their phone, skip the line and pick up their freshly made order within minutes.” Price points are envisioned as roughly $5 for a sandwich, $8 for a soup/sandwich combo.

Kaplan and Co. are planning on being very busy for a concept whose menu is limited to items that lack the broad appeal of hamburgers, subs and other sandwich favorites. But at least the company will have some sharp minds advising and funding its operations. Besides Mina, the board of directors includes Ron Johnson, head of Apple’s retail operations; legendary tech investor Michael Moritz of venture capital firm Sequoia Capital; and Bruce Dunlevie of Benchmark Capital. Sequoia will fund the first 20 stores; some of its previous investments include early stage backing of Apple, Google and Oracle.

These heavyweights aren’t always right, but we know they expect a huge payout when a company begins to hit its stride. Keep your eye on how rapidly The Melt executes its ambitious expansion plans. We’ll learn either than tech guys can’t do restaurants, or that most of us need to rethink our business plans so we follow the tantalizing blueprint Kaplan and his brainiac board has drawn for us here.