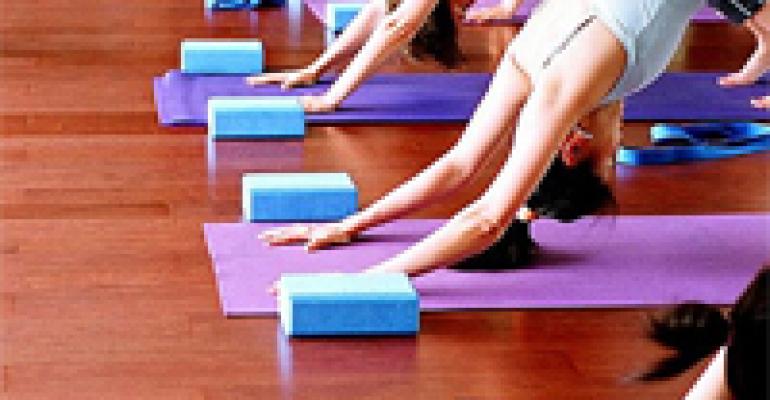 We’re not sure when or where the notion of combining a workout with a high-end meal got started. But it’s likely to get even bigger now that New York Times reviewer Frank Bruni has anointed Napa, CA, restaurant-yoga studio Ubuntu as his No. 2 “Best New Restaurant” in the country. Whether patrons are doing shoulder stands before their starter course in Napa, going for a pre-dinner single-track bike ride with their chef in Boulder, CO, or tuning up their putting stroke before sitting down to dinner in Corona, CA, more of them are looking to break a sweat before having their meal at full-service restaurants.

You’d think that Bruni, on a coast-to-coast search for the best new restaurants outside of New York, would have been put off by the parade of sweatsuit- and lycra-clad yoga students that passes through Ubuntu’s dining room on their way to and from the yoga studio upstairs. But it was he who found nirvana instead. ‘Ubuntu is where virtue meets naughty sensuality,” he wrote of the vegetarian-only restaurant where most dishes cost $15 or less and the seven-course tasting menu goes for $70. “It’s the Angelina Jolie of restaurants. I can guarantee that the next time I’m in Napa, I’m back at Ubuntu.”

The upstairs yoga studio is no mere add-on. Unlike some spa-associated restaurants, where the “activity” involves laying flat while a masseuse manipulates your muscles or an attendant places hot stones on your spine, the yoga students at Ubuntu work up a sweat. The place incorporates 53 classes each week into a schedule that runs from morning to night, seven days a week. Classes cost $18 apiece, $125 for a 10-class pass. On Thursdays, following the yoga happy hour class, which runs from 6:30 to 7:40 p.m., students head down to the restaurant. There they sit down at the Ubuntu community table to enjoy a $32 “family style” meal, complete with a glass of house wine.

Note that “Yoga for Lunch,” taught by Dr. Juan Sacristan, does not involve any food. But the restaurant is open for lunch seven days a week. Dinner, too, and even before the Bruni review, reservations were a must.

Ubuntu chef Jeremy Fox is highly talented, but he leaves the sun salute and spinal twist instruction to someone else. In contrast, chef Jason Rogers takes the hands-on approach at the St. Julien Hotel & Spa in Boulder, CO. The chef at the resort’s Jill’s Restaurant personally leads the single-track mountain bike rides that are part of the St. Julien’s “Boulder Biking and BBQ” experience. It’s a three-part adventure that makes for an interesting day for guests.

Rogers is a lifelong biker. “In college, I started riding single track religiously,” he says. “Once I became executive chef at St. Julien, I was able to live near work and ride every day.”

There are plenty of trail options near Boulder—200 miles worth. Rogers leads groups of up to six guests at a time over them, even packing along some house-made “biking boost” granola to perk up his charges on the two-hour-long rides. As they pedal, Rogers queries guests about what they would like to have for dinner when they get back.

When the group returns from their outing, Rogers adjourns to the kitchen to start prepping the evening’s meal. Guests, meanwhile, get pampered with a 50-minute post-biking massage at the St. Julien. Next comes a session on the hotel’s terrace, where guests soak in the views and suck down some locally brewed beer, wine or, if they choose, some non-alcoholic refreshment. Then it’s time for a four-course gourmet dinner, custom-crafted by Rogers to the group’s specifications.

“This is the quintessential Boulder experience,” the chef says. “Come and experience the best of the Front Range single track, then kick back and take it easy. I’ll do the cooking.”

The Boulder Biking and BBQ package goes for $250 per person, which includes mountain bike gear and rental, the customized tour lead by Rogers, the post-ride massage, and drinks and dinner. He’ll do it for groups as small as two, and as large as six, and you don’t have to be a hotel guest to participate.

The Citrus City Grille is a big-ticket white tablecloth restaurant that had so much success since opening in 1996 in at original Southern California location, Orange County, that it has since added outposts in, first, Riverside, CA, and then, just last month, in Norco. The new Norco outlet of this contemporary-casual eatery is a big restaurant—10,000 square feet. It’s located in The Promenade Shops at Dos Lagos, the town’s first “lifestyle center” and offers its patrons a view of the lake. You wouldn’t think Citrus City Grille patrons would lack for something to do before dining, since there are 60 retail shops and a 15-screen theater located just steps away. But Citrus City went ahead and installed a lakeside putting green, making it the only restaurant in the region to have one.

Like Ubuntu and the St. Julien, Citrus City is a strong business perfectly capable of standing on its own, and doesn’t need a gimmick to lure people in. But their experience so far with, respectively, yoga, mountain biking and golf indicate that if you want tap into what the travel industry has labeled “the active adventurer market,” it doesn’t hurt to meet them halfway. Just as adventure travel has become a huge and lucrative part of the travel industry, adventure dining just might make it big in the restaurant world.
Recommended Reading