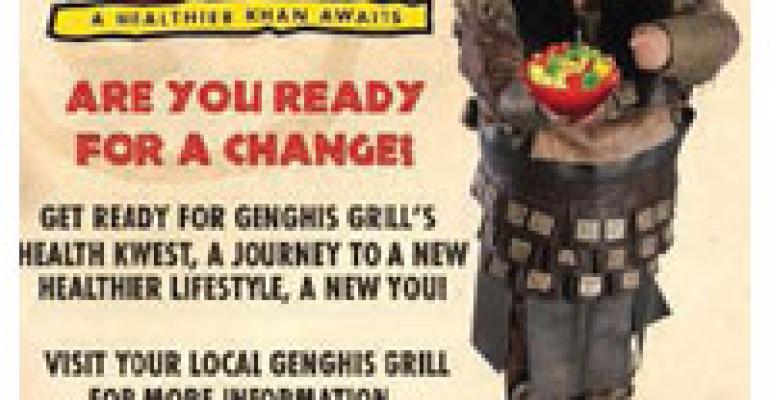 You have to love the thinking behind stir-fry chain Genghis Grill's new Health Kwest campaign. The three-month-long contest takes elements of NBC's enduringly popular tv show Biggest Loser and recasts them online, relying on contestants' command of social media platforms such as Facebook and Twitter to stoke interest in the event.

For a modest investment of company resources — the energy and time of its marketing staff, the cost of one free meal per day per contestant from each of the chain's 60 units, plus a grand prize of $10,000 cash to the winner — Genghis Grill should raise its profile dramatically within its target demographic, while simultaneously driving home its key marketing point that it's a healthful place to eat.

“We always felt that we didn't do enough to educate our fans about the healthier and nutritional aspects of our restaurants,” says Genghis Grill president/c.e.o. Al Bhakta. “I really feel this message will be driven home with this campaign.”

Health Kwest was set up this way.

Prospective participants could nominate themselves online during January, submitting a digital image and telling their personal story. Contest judges then chose 60 contestants, pairing each with a Genghis Grill unit close by. Participants then eat free for the next three months while attempting to follow a dietitian-designed diet and exercise plan provided by Medical City Hospital in Dallas. Experts from the hospital will analyze each contestant's results during the contest to ensure compliance and safety.

Along the way, participants are expected to update their personal blog and post photos of themselves weekly on the contest's website, www.gghealthkwest.com. They're also encouraged to build a social media network of Facebook fans and bombard followers with Twitter tweets.

Expect some creative campaigning, because online activity will likely determine the winner. While the highest percentage of weight lost counts for half of each contestant's total score, blogging activity accounts for 25 percent, as does the public vote each individual receives. Thus someone who loses a decent amount of weight while posting a lot of clever content on their blog that helps convince people to vote for him or her can win the big prize. Ballot-box stuffing is not allowed; individuals can vote only once per day during the contest's three-month run.

Health Kwest ends this May. We like that it takes a known format and leverages social media to create buzz about the restaurant. It's low cost, yet high impact. If you're wondering what smart marketing looks like in the digital age, we offer this as exhibit “A.”