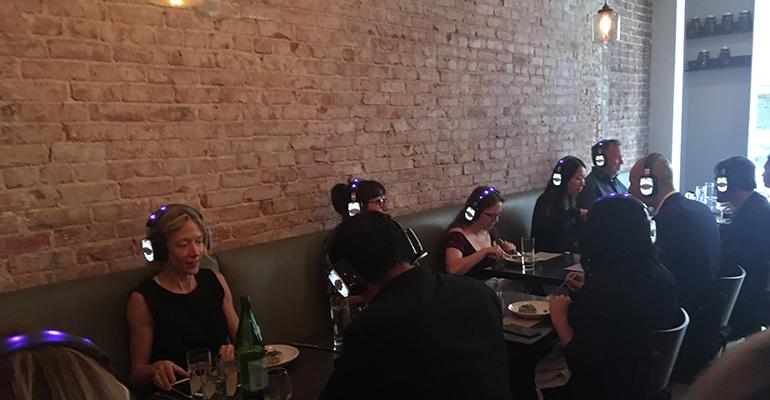 Music has long played an important supporting role in restaurants. But one California restaurateur is experimenting with a unique event that attempts to literally choreograph a meal to music.

The event is an example of how restaurants are looking to enhance the experiential aspects of dining out, going beyond food, drink and atmosphere to bring guests together in new ways.

The Tasty Tunes event featured a one-seating, three-course prix fixe dinner and dessert combined with hand-selected music that was delivered via wireless headphones. While Union chef and co-owner Bruce Kalman said the initial plan was to attempt to time the music to each course of the meal, they realized that everyone eats at a different speed, so they set it up based on speed instead.

“We decided to organize the playlist to go with the speed of the meal,” said Kalman. “The beginning of the meal usually starts slow, so we started with mellow music such as Billy Joel and Marvin Gaye.”

The first course was a fava bean crostone with pecorino Toscano and pickled shallots.

Kalman said the music was more about setting the energy, grabbing attention and getting diners focused.

“This type of event puts the focus on the food, not all of the background noises around you,” he said. “By laughing and smiling and head bopping, they’re not necessarily talking, but they’re keeping their focus on the music and the food.” Distracting one of your senses heightens all of your other senses, argued Kalman. As a result, their perception of what was on their plates was enhanced.

“At the end, most people got up and danced, and afterward, we did a conga line through the dining room,” he said.

The servers, kitchen staff, hostess and guests all wore headphones throughout the night, which could have potentially caused service issues, but Kalman had it covered.

“We came out and talked with everyone before the event and explained how the night would go,” said Kalman. “We let them know that if they needed anything, they could just raise their hand like they were in class.”

The event was the first dinner event for HUSHconcerts as well, according to director of Southern California operations Jason Gaulton.

“It’s something that had been in the back of our minds for a while, but it took the phone call from Bruce and his PR company to put us into motion,” said Gaulton. “We’re hoping to collaborate with Bruce again, and maybe even on a larger scale.”

Gaulton was also at the event, and said it was a very open and community-oriented atmosphere. “Instead of everyone keeping to themselves, there was more of a social scene amongst the diners even though they were strangers beforehand,” said Gaulton. “It set a looser tone than a normal night at a restaurant, and everyone was on their feet dancing by the end of it.”

“It was fun to watch people try to figure out what was going to happen in the beginning since the headphones weren’t functional until the first course came out,” said Gaulton. “The first course dropped, the first beat followed, and everyone fell right into it,” he said.

Kalman is a musician and lover of all genres of music. He plays in a cover band called Foie Grock with other restaurant industry peers, including Duff Goldman, Francis Castagnetti, Ben Offenberg and Jeff Liffmann.

He said the next Tasty Tunes event is in the works.

“We’ll definitely plan another one for later in the year, most likely off site at an event space or on the beach,” he said. “We’d like more space for the dinner and for a dance party afterward.”