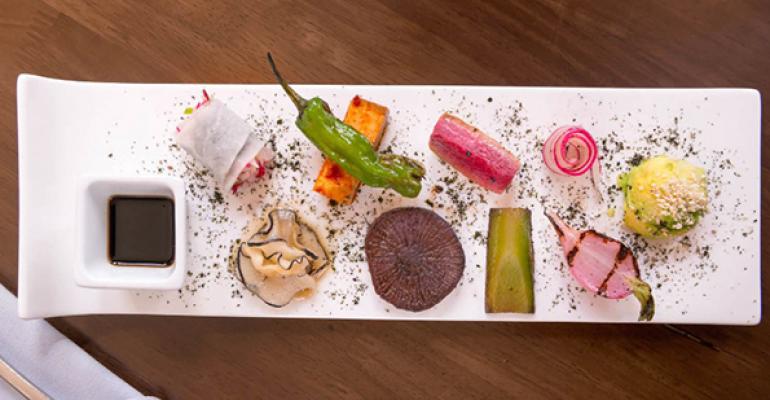 11 trends that will impact restaurants in 2016

The two most noteworthy trends in for 2016 have nothing to do with food, according to long-time food trend mavens Baum+Whiteman. Rather, the consultants expect a revolution in high-speed food delivery and an ever-louder national conversation regarding tipping and pay disparities to have the greatest impact on the restaurant world.

Baum+Whiteman creates high-profile restaurants around the world for hotels, restaurant companies, museums and other consumer destinations. Based in NYC, their projects include the late Windows on the World and the magical Rainbow Room, and the world's first food courts. A condensed version of their insightful annual hospitality predictions follows; the complete report along with a couple dozen buzzwords for the coming year can be found on their website.

1. Amazon, Uber and others will shake up the delivery game.

Tech-driven delivery is 2015-2016's Big Disrupter of food retailing and foodservice. Delivery affects everyone from McDonald's to white tablecloth concepts. Smartphoners, latching onto the ease of locating a restaurant, ordering, paying, and getting loyalty points—without ever speaking to a human being—are driving this revolution.

Muscling into high-speed food delivery: Google, UberEATS, Amazon Prime Now, Postmates, Grub Hub, Yelp. None of them make food. They collect fees and personal information about who orders what, when and from which restaurants. 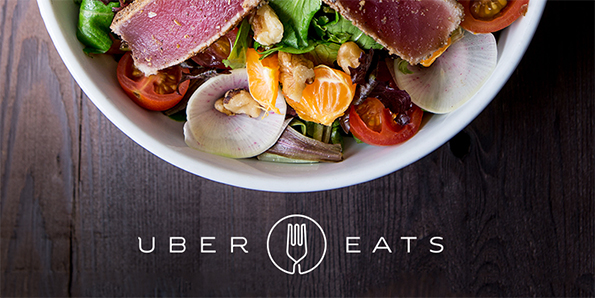 UberEATS is one of a handful of companies promising meal delivery convenience. Photo: UberEATS

Most fast-casual outfits, initially designed for consumer involvement in the assembly process, will have to wrestle with this delivery challenge.

They're all racing to your door. UberEATS gets a limited menu to your curb in ten minutes by preloading food into drivers' cars. Amazon's Prime Now app gets entire menus delivered in an hour (39 minutes in Seattle). The Postmates Pop app promises 15 minutes in San Francisco.

Now things get blurry. Outfits like Amazon and Google ultimately won't care whether consumers order rotisserie chicken from Boston Market or Kroger or Dean & Deluca or a local food truck. This means the battle for food dollars among various distribution channels will intensify.

The danger for restaurants: Suppose customers are craving barbecued ribs, and sites like Amazon or Uber or Google gave them a dozen restaurants and gourmet shops near their zip code, along with professional reviews of these producers, along with rankings? Poof! Restaurants lose marketing control of their businesses.

After watching consumers attack Big Food over chemicals and additives, Big Restaurants are suddenly ditching some artificial and bad-for-you ingredients from their menus. A recent survey found that 36 percent of consumers worried about "chemicals" in their food. In another survey, 40 percent of consumers report it’s “very important” that foods use all-natural ingredients, free of GMOs and artificial flavors or colors.

Odd that most of this activity is occurring at quick-service and fast-casual chains, with little word from full-service restaurants. But getting rid of selected no-nos is no mere fad. Everyone will scramble to "sanitize" their menus.

3. Could pasta become an endangered species?

In the last five years pasta sales dropped 8 percent in Australia, 13 percent and 25 percent in Italy of all places. It isn't a crisis here yet, but pasta's down 6 percent as Americans focus on proteins and shed carbs, or shun gluten, or subscribe to Paleo diets. Even carboholics have more nutritious alternatives, such as  quinoa, chickpeas, lentils, spelt, barley, chia. So it looks like a trend.

Vegetable spiralizers are selling like, well, hotcakes. Chefs will experiment with vegetable ribbons to replace pasta. And look for pastas incorporating more vegetabales, too.

4. Vegetables will continue to step up on the plate.

We've reached a tipping point for vegetables. They're pushing animal protein to the side of the plate, sometimes entirely off it. Relentlessly rising beef prices, concerns over hormones, a scramble for ever-more antioxidants, health and diet concerns, growth of farmers’ markets, locavore proponents, increasing numbers of flexitarians: All the stars have nicely aligned.

It helps that vegetables are more seasonal than animals, adding menu excitement for restaurants recognizing that buying seasonally reduces food costs and keeping menus fresh. Say hello to "root to stem" dining, a logical extension of the nose-to-tail movement, with restaurants serving vegetables trimmings otherwise heading for the trash. Say hello to "vegetable forward" restaurants, with chefs deploying flesh as a condiment rather than the main act on the plate.

Not just vegetarians and vegans consumers behind this shift are omnivores who believe they eat too many animals. It’s noo accident that Bon Appetit named quirky Al's Place, in San Francisco's Mission District, as best new restaurant of 2015. Most meat on their menu is listed under "side dishes," and the food is head-spinningly complex: sunchoke curry with black lime, cod and grapefruit; brined and fermented french fries with smoked applesauce. Nothing's wasted, citrus peels are transformed into flavored oils that are frozen for freshness and eggplant mayo is made with pods of shelling beans.

The transforming idea is that veg-forward restaurants no longer sell hippie food tasting like punishment. They're serving great meals composed mostly (or entirely) of vegetables that are great to look at, satisfyingly memorable and compatible with wine.

How mainstream are we? White Castle now has a veggie slider, served on a vegan bun.

5. Have tipping and wages reached a tipping point?

"Fundamentally, the cost of going out to a fine-dining restaurant is false." Danny Meyer said so recently, while he explained why he's moving his restaurants to a no-tipping policy, thereby raising wages for all of his staffers, front- and back-of-the-house.

In truth, the restaurant industry's amazing growth over the past five decades has depended on artificially low prices that in turn are based upon underpaid labor. In the fast food business, low labor costs are subsidized by taxes on the general public to pay for employees' food stamps and other supplementary welfare payments. In fancy restaurants, your $36 main course could easily have been made by a $10/hour cook sweating in an overheated kitchen.

Social and economic trends move glacially—and then seem to happen all at once. While most people pooh-pooh no-tipping restaurants as un-American, the movement now possess momentum. Fact is that even above $15/hour, restaurants are finding it impossible to hire cooks while keeping their labor costs in line, indicating two things: (1) pay is too low; and (2) prices are too low. If forced to pay the full price for food, would consumers eat out less? Quite probably. You might conclude that we have too many restaurants and not enough cooks, and that shifts in prices and wages might even things out. At least that’s what Economics 101 teaches us.

Most no-tipping restaurants tend to be upscale. In highfalutin restaurants with multicourse price-fixed menus, service generally is included in the price. Recently opened Dirt Candy adds a 20 percent administrative fee. Japanese Ippuku in Berkeley imposes a $6 service charge per person. Ivar’s Salmon House raised prices and wages so workers are paid least $15 per hour and declared it a success. But it isn't all sweetness: Two restaurants in San Francisco, Bar Agricole and Trou Normand, went tip-free and then switched back because they couldn't hang onto servers. But the policy is trickling down.

6. Poke may be the next ceviche/sashimi/crudo.

Poke is a Hawaiian mainstay that's migrating to the mainland. Basically it’s a bowl of marinated chopped or cubed raw fish (traditionally ahi tuna) served over over seaweed-seasoned rice

The dish is all over L.A. and starting to surface in places like Salt Lake City, Boston and NYC. 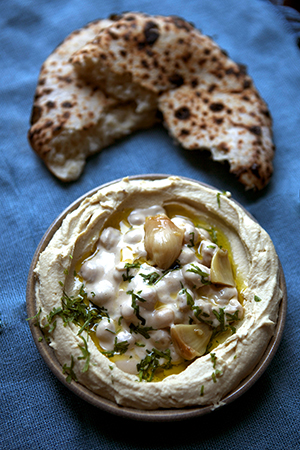 Shaya, a "Jew-ish" concept, has a whole section devoted to hummus. Photo: Shaya

How come now? Because chefs everywhere are today exploring their roots and cuisines. "Heritage cuisines" are being expressed with stories behind them. Grandchildren and great-grandchildren are reinventing dishes and foodways that second-generation immigrants turned their backs on (except at holidays).

Atlanta's General Muir typifies the trend, curing its own meats, rolling its bagels and  turning out food with only a slight accent: matzoh ball soup, and smoked duck with peaches and blackberry gastrique; chopped liver, but also halibut with heirloom tomato sauce and pea tendrils; gruyere burger with crisped pastrami.

Move over, smoothies. Acai bowls are the next big hipster food. Using a fruit from Brazil, they're migrating from Hawaii and spreading cross-country. It’s fundamentally a big-bowl smoothie, made from frozen acai pulp and soy or other milk plus bananas, bits of other fruit and lots of ice, with toppings like granola, chia seeds, chocolate chips, coconut flakes and peanut better. You eat it with a spoon and it tastes fairly close to ice cream. You also pay about $10. Google searches for acai bowls have more than doubled this year.

8. The obsession with fried chicken will grow.

Shake Shack made headlines this year with a limited release of a fairly conventional ChickenShack sandwich. So did David Chang, with an incendiary sandwich at Fuku, perhaps a nascent chain. They follow an emerging obsession. No longer just southern, fried chicken sandwiches have gone creative and ethnic.

In Fuku's case, you're munching on a mammoth boneless thigh marinated in habanero purée, buttermilk, and Changian spices, deep-fried and topped with some acidic vegetables. Barbecue maven Mighty Quinn smokes its thighs before frying and tops them with fermented chilies-garlic-lime sauce. 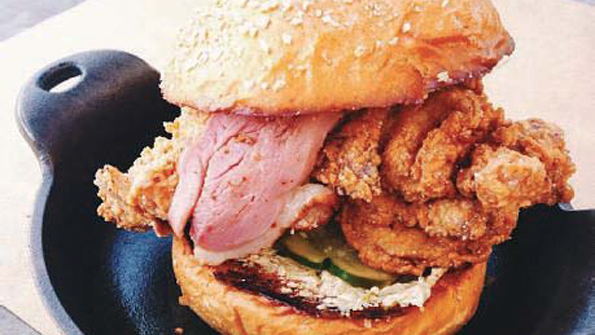 Nashville hot is a cult favorite that's spreading across the country. It's  meant to burn your lips for days on end. Like buffalo wings, Nashville Hot Chicken is dunked in hot sauce after frying; but it ain't plain old hot sauce. This is a thermonuclear paste of melted lard, sugar, sadistic quantities of cayenne, sugar and each chef's secret spices. It is showing up in fried chicken joints and sitdown restaurants, including Carla Hall's soon-to-open spot in NYC.

9. Sometimes heat alone will not be enough.

America's pepperheads are (finally) discovering that heat is not enough ... that food also has flavors. So we're watching an interesting shift from just-plain-incendiary to aromatic and flavorful spice blends and sauces, including:

10. Retailers will renew their attack on restaurants.

In our 2014 forecast we highlighted how U.S. retailers are building revenue by luring shoppers into stores for snacks and meals. Retailers, we said, were discovering what we call the magic of "dwell time" ... the longer you keep a shopper on the premises, the more the shopper will buy per hour of stay.

• Whole Foods jus invested in the boutique high-volume sandwich-salad chain, Mendocino Farms, to help them grow and will be opening units at select Whole Foods Markets and their more popularly priced 365 stores.

• Lexus has a lifestyle showroom in Tokyo called Intersect, with a street-level cafe and a bistro upstairs serving a global French-Japanese-Mexican mishmash with lots of pretention

We seem to be moving from three meals a day to none! Snacks are obliterating meals. It's not just Millennials or dashboard diners; growing numbers of Americans snack four or five times daily. Snacking increased 47 percent from 2010 to 2014. We raise this because snack flavor profiles are changing:

• The ground is shifting away from sweet to savory, and from high-carb to nutrient dense high-protein indulgent snacks. Even when sweeteners are involved, they're often combined with spicy.

• Sour is replacing sweet. Consumers are seeking deep contrasts to richness, which explains why fermented condiments (like kimchee and house-pickled vegetables) are popular on menus. Tart + bitter is also rising in popularity with new kale, crunchy broccoli and other vegetable chips.

• Bitter is also gaining momentum, especially in beverages like coffee and tea.