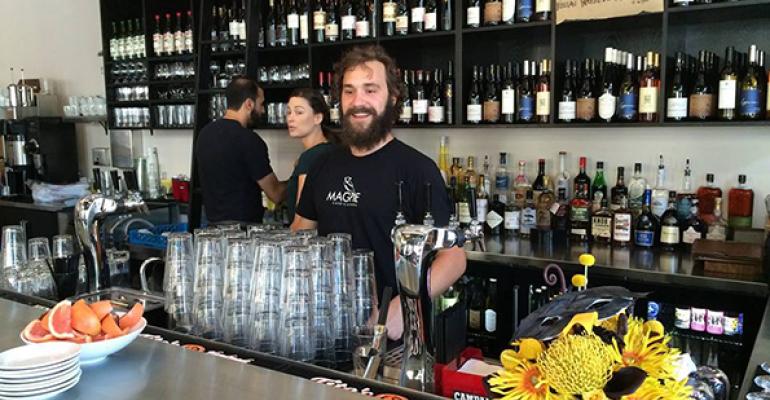 <p>Guests can now designate a portion of their tips to kitchen help at Magpie Cafe.</p>
Trends

In the West, where a number of states do not allow a tip credit, the disparity between front- and back-of-the-house staff compensation is a growing concern for restaurant operators.

Rising minimum wage rates benefit all restaurant workers, but servers have the added benefit of tips on top of the full hourly rate in states like California. Unless servers tip out the kitchen staff voluntarily (it's illegal to require servers to share tips with kitchen staff), those in the back of the house do not share in that prosperity.

Restaurant operators like Ed Roehr and Janel Inouye, who own Magpie Cafe in Sacramento, are trying to address that pay gap.

Earlier this summer, when the restaurant moved to a new location, the owners instituted a new two-tiered tipping policy. Every guest check had two lines for leaving a tip: one for the server, and one for the kitchen.

"We have worked hard to try to make this a better restaurant with natural, seasonal and organic ingredients," Roehr explains. "We also wanted to create a restaurant that was better for our staff, and one that wasn't dependent on the hardship of people in the back of the house."

The initial response from guests was surprising. Most had no idea the kitchen staff generally doesn't get included in tips.

In the beginning, guests tended to split the two tips 50/50.

That didn't go over well with some servers, however.

"We wanted it to be meaningful for the back of the house, but not destroy the tipping system as we know it," Roehr says.

Not all customers contribute both tips. Some tip the server and draw a line through the kitchen tip option.

On the other hand, when guests are particularly happy and want to tip a little extra, those "windfall tips" generally go to the kitchen, he adds.

Unlike the server tips, those that go to the back-of-house staff are pooled and distributed via spreadsheet under a weighted system based on hours worked. A line cook gets a certain percentage more than a dishwasher, for example. The kitchen pool does not include any managers.

The addition of the kitchen tip has boosted back-of-the-house wages by roughly $2 per hour. Now line cooks are earning close to $16 per hour.

That's a key factor at a time when many restaurants are struggling to find quality kitchen staff. "It's going to be more and more difficult if we can't make this work," Roehr says.

Still, Roehr says he realizes this is a difficult adjustment for servers. But business is up, in part because of the new location, which includes a new bar, and servers are benefitting.

"There have been no mass migrations," he says. "We understand that it's a lot to ask the servers to have faith that we're trying to make a better restaurant."

Magpie isn't the first restaurant to institute a two-tier system. They got the idea from Alimento in L.A., which began adding a separate gratuity line for cooks at the end of last year.

Roehr hopes the idea will catch on.

While some of the "chatter" about the new tipping policy has been negative, Roehr says he believes front-of-the-house/back-of-the-house wage disparity is an issue that needs to be addressed.

"We could have not done anything about this, but we think it's a real issue, and we're restaurant people," he said. "We want Sacramento to be a better place."