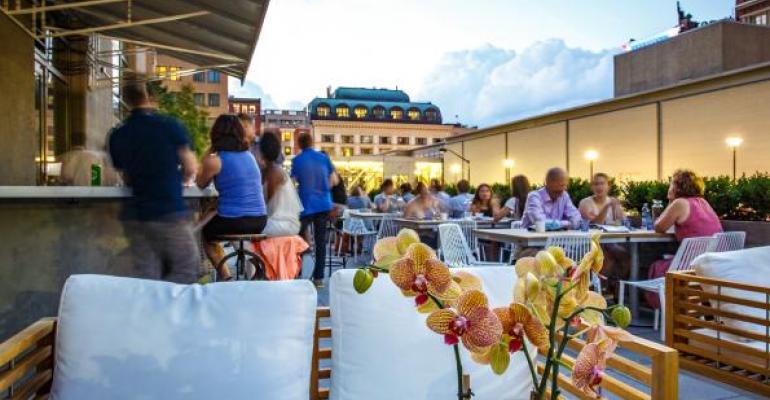 <p>Porto Restaurant is inside the Prudential Center apartment building in Boston.</p>
Trends

In big cities such as New York, Los Angeles and Boston, where it can be a mission to secure reservations and parking, restaurants housed inside apartment and condo buildings tend to be more commonplace. But now the concept is spreading into more urban areas where operators are searching for creative real estate options and landlords are looking to provide tenants with more amenities.

“This arrangement is pretty commonplace in New York City, where we’re from, but we definitely think it will continue to spread,” says Marc Rose, co-owner of Winsome at The Elysian in Echo Park, a Los Angeles neighborhood. “Having a great place to eat in an apartment or condo is an incredible amenity if it’s done right, and it guarantees longevity for both the residence and the restaurant.”

“It’s impossible to find stand-alone buildings anymore, so many restaurant owners are instead opening in luxury apartment buildings and office buildings,” says Jody Adams, co-owner of Porto Restaurant, inside the Prudential Center apartment building in Boston. “Opening Porto in an apartment building was a function of all of the development in Boston. It’s a trend that’s definitely growing in urban developments because of lack of real estate options. We’ve been approached by other developers outside of Boston, so now it’s expanding outside of the city and into the suburbs.”

“I think it makes sense to grow this idea of upscale restaurants in high-end, luxury apartments as an amenity,” says Michael Schlow, chef and owner of Doretta Taverna & Raw Bar (formerly Via Matta, also owned by Schlow) inside Heritage on the Garden in Boston. “It’s a win for the restaurant as there’s a built-in customer base, and it’s a win for the landlord as there’s an amenity that makes their property more unique and appealing to the tenants.”

The benefits to a restaurant in residence are threefold, with something for operators, residents and landlords.

“We have a built-in community with the residents, and they’ve become like an extended family,” says Med Abrous, co-owner of Winsome at The Elysian. “Whether they’re grabbing coffee on the way to work, coming down for a breakfast or lunch meeting, or bringing a date for dinner, they are a key driver of business for us.”

“We have wonderful regulars who are part of our family now,” Schlow says. “We see familiar faces daily and they feel like this is ‘their restaurant,’ which is what we we’re always striving for.  For the landlord of Heritage on the Garden, the benefit of having a notable chef with an upscale restaurant in his building is that he can use it as a selling point and an amenity for perspective buyers.”

Restaurants in residences face the same types of challenges as any restaurant, with the added tasks of trying to please a landlord and tenants on a regular basis.

“The biggest struggle so far was when we hit the 13-year mark as Via Matta. We realized that we needed to reimagine ourselves and offer our guests a new and fresh idea so that we would continue to appeal to them,” says Schlow.

“We reopened this past November as Doretta Taverna & Raw Bar and the tenants of the building were thrilled. It’s a Greek restaurant with a focus on seafood that has been a hit with them.”

“We challenge ourselves to make sure that Winsome is always an exciting place to eat, even for those who have been here a thousand times,” says Rose. “We make sure to change our menu every so often and as the seasons call for it, particularly when it comes to our baked goods and desserts.”

“The biggest struggle is being on the first floor of a 30-story tower. It’s hard to have a physical presence because the building was never intended to have a restaurant, so we have visibility challenges,” says Eric Papachristos, co-owner of Porto Restaurant, inside the Prudential Center apartment building in Boston. “We are a side entrance from the main road so we don’t have the organic foot traffic. But we are working on visibility, and people are finding us.” 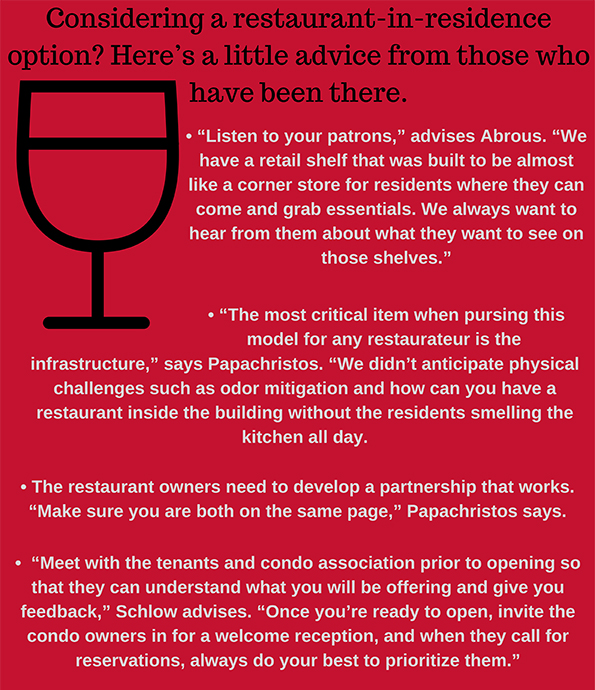