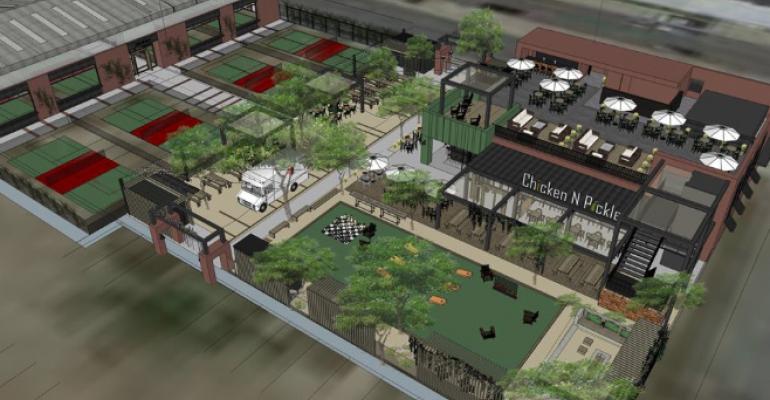 Curious about the viability of an activity-based sports bar operation that includes an ambitious food component? Check out the expansion going on in what we’re calling the paddle sport restaurant category. That’s where three concepts now enjoy a revenue stream that includes more than just food and drink. Two table tennis-based operations, SPiN and AceBounce, already have multiple locations. A third, Chicken N Pickle, hopes to cash in on the fast-growing pickleball craze to do even better.

Bowling-based restaurants have already shown that operations where customers not only watch sports but actively play them can prosper. The lineup in this segment includes 16-unit Lucky Strike Lanes, 19 Bowlmor entertainment destinations and seven-unit Pinstripes. A basic formula of booze, bites and bowling has helped this segment endure.

We’ll find out next if paddle sport restaurants will have the same sort of staying power. The recent table tennis revival means there should be more than enough customers to fill the tables at SPiN and AceBounce. The indoor sport, once primarily played in suburban basements by kids, is now a must-have workplace amenity at Silicon Valley companies ranging from Google and Facebook on down to tiny tech startups. Employers elsewhere are also on board with the trend. So are landlords who hope to attract millennial-aged renters.

SPiN got its start in New York City in 2009. This concept’s public face is that of partner and Academy Award-winning actress Susan Sarandon. It was a low-key club at first, but has since expanded to five units across the country, some of which offer serious farm-to-table menus to go along with drinks and games.

At SPiN’s just-opened Chicago location, reserved tables go for $59 an hour for nonmembers, with memberships priced at $99 per month. Walk-in rates during evening prime time hours are $39.

The shareable plates menu at SPiN Chicago comes from chef Ariel Bagadiong, late of Aja at the Dana Hotel. The 16,000 sq.-ft. David Rockwell-designed space houses 20 tables. When hitting on all cylinders, the tables can bring in as much as $1,000 per hour in rental fees. One upscale feature at SPiN: customers don’t have to retrieve stray balls. Players merely pluck a new one from tableside ball buckets and continue their game. SPiN employees retrieve loose balls that collect on the floor.

One look at a SPiN operation may have convinced the backers of London-based ping-pong venue AceBounce to give the U.S. a try. Its first unit is a 14,500 sq.-ft. space that’s also in Chicago. Off-peak (before 6 p.m.), each of the 17 tables at AceBounce costs $25 per hour. Prime-time evening slots go for $39.

The menu at this palace of pong is the work of Rick Gresh, former executive chef at David Burke’s Primehouse and the Virgin Hotel. Its a key factor that makes Bounce quite a scene when going full throttle. “Ping pong players can grab bites in between serves and diners can take it all in from an elevated restaurant beside a world-class kitchen,” the concept’s website says.

SPiN and AceBounce have definitely elevated the table tennis experience. Chicken N Pickle hopes to do the same for pickleball.

The North Kansas City, MO, concept adheres to many of the same principles as SPiN and Bounce, but differs in three important ways:

• CNP is an indoor and outdoor entertainment complex, not just indoors

Pickleball, routinely described as the fastest-growing sport in the country, is a hybrid of tennis, badminton and table tennis. It’s played on a court roughly 40 percent the size of a tennis court, and its galloping popularity makes it hard for players to find an open court.

Not a problem at Chicken N Pickle, which has eight courts, four indoors and four outdoors. Rates begin at $5 per hour for drop-in play before noon, increasing later in the day. It’s $20 per hour to reserve a court.

Just opened in June, the facility already host four leagues, a series of skill clinics and the occasional tournament, all of which help keep the facility buzzing. Because pickleball is a cross-generational sport that not only allows grandparents to compete with their children and grandchildren but in many cases administer an epic beating, pickleball is particularly popular with older players. They tend to play early in the day, driving court revenue in what otherwise would be off-hours. Younger demographics show up later.

CNP’s food component, built around rotisserie chicken, has been pushed back until October. In the meantime, a rotating lineup of food trucks services the complex. Chicken N Pickle gets 10 percent of the day’s take from the trucks.

Given the enduring popularity of bowling-based restaurant entertainment concepts, chances of these paddle sport offshoots surviving should be good. If you’re looking to add a revenue stream to your operation,  something similar—customers eat, drink and entertain themselves playing games while simultaneously giving other patrons something to watch—could work.