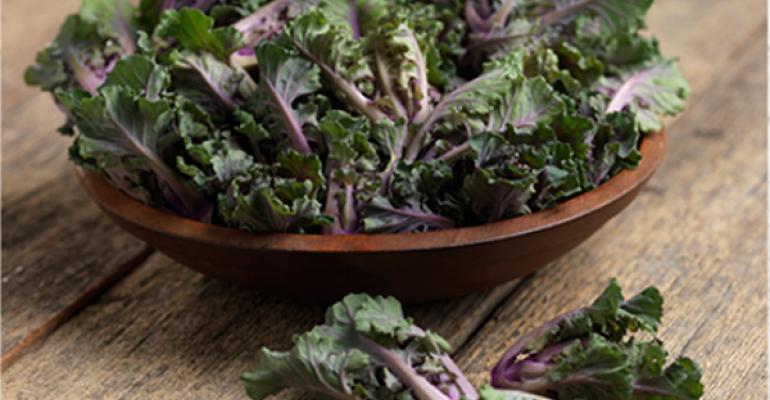 No one knows if the many restaurant trend predictors who say the kale craze is over are correct. But produce suppliers are ready with a promising spinoff vegetable if they are. It’s the kalette, a tasty kale/brussels sprout hybrid whose nutritional profile is on a par with its superfood predecessors.

The miracle of kale is that it became a national trend without any promotional push or marketing support behind it. The once-obscure leafy green caught on because it offered  the whole package. Kale-eating customers could watch their weight and their wallets while enjoying its unsurpassed health benefits, displaying their foodie street cred every time they ordered it.

Restaurant operators embraced kale, too. It’s inexpensive to buy and easy to source year-round. Also, most varieties of kale have a bitter taste and peppery flavor that requires the culinary touch of a professional kitchen to make the end product delicious. Best of all, customers would order it.

Kale’s popularity grew in a hurry. In mid-2014, menu tracking firm Datassential reported that kale, which had a four-year growth rate of 480 percent, was used an ingredient in 248 percent more salads served by chain and independent restaurants than it had been in the prior year.

“Kale has trickled from fine dining onto casual dining menus, but hasn’t quite made it to QSR and midscale restaurants,” Datassential said at the time. “Despite all the press around kale over the past couple years, it’s still only in the ‘adoption’ stage, with still a lot of room to go.”

Translation: the foodies who helped raise kale from obscurity are looking for a new vegetable to hype. Some have proposed brussels sprouts as a replacement, but too many adults may harbor bad memories of overcooked unappealing sprouts from their youth. The produce industry has a solution: kalettes.

“Kalettes are the product of 15 years of hard work and dedication (using traditional breeding techniques) from the British vegetable seed house Tozer Seeds. Kalettes are a non-GMO vegetable developed through traditional hybridization and not genetic modification. Crossing kale with brussels sprouts was a natural fit since they are both from the Brassica Oleracea species which also includes cabbage, cauliflower and broccoli.

“The result is a brand-new vegetable which looks a little like a tiny cabbage with green frilly leaves and streaks of purple. Kalettes get their great taste by combining the best flavors from brussels sprouts and kale, resulting in a fresh fusion of sweet and nutty.”

The product could do well on restaurant menus because it comes with built-inn buzz. “It possesses the stupendous fortune of being a hybrid of the two vegetables that arguably have the most cult-like of foodie followings,” notes Slate.

The last vegetable hybrid to catch on in the U.S. was broccolini, a cross between broccoli and Chinese kale. Broccolini was introduced by Salinas, CA, produce company Mann Packing. Mann is also one of a handful of U.S. companies that sells kalettes. It began limited foodservice shipments last year.

“We felt that it’s better to get some smaller chefs and restaurants on now instead of handling a huge chain,” Mann’s director of healthy culinary innovation Gina Nucci tells produce industry trade journal The Packer. “We’re slowly ramping up acreage.

“Kalettes look a little odd but the flavor is amazing in a light sauté or raw,” she adds. “We believe consumers want flavor, and you don’t have to kill it like you might some of the thicker kales.”

If the trend trackers are right and your restaurant’s customers are getting tired of kale, keep kalettes in mind. They might become the next big thing on your menu.